CrewServed said:
Way cool to see another Gen 1 show up. These trucks are surprisingly capable and a ton of fun to work on and drive. All the years I've been bouncing around in my rig and I haven't yet done the diff breather relocation. How long did that take you?
Click to expand...

15 minutes or so is all it took. And I'm mechanically challenged, so it should be faster for anyone else. One piece of advice: get the spare out of the way. I left it in there and it was in the way the whole time. Also, you'll need a decent length of hose....I'd get at least 10 ft to be safe and cut off the excess. They didn't give me a long enough piece so I had to splice a second hose onto the first with a junction. Pretty ghetto!

You've done a nice job on your build.
Been fun following along.

Great build, I was kicking around buying a late model gen 1 tundra but settled on a 4th gen 4runner. Great documentation and well thought out.

Nframe1961 and vonguido, thanks for the feedback and for following along. It's all a learning process for me right now and I'm enjoying it.


I picked up my Technician license for Ham radio last year but haven't done much with it. I decided to upgrade my antenna because I could hardly pick up any signals using a rubber ducky antenna in the cab. I have a cheapo Baofeng F8HP with extended battery for the time being. Eventually I will upgrade to a dedicated mobile rig.

The bracket fits perfectly. Remove this bolt, put the bracket on, and tighten it back up. The bracket I ordered is made for the driver's side, and accounts for the downward rake of the engine bay, and holds the antenna straight up. 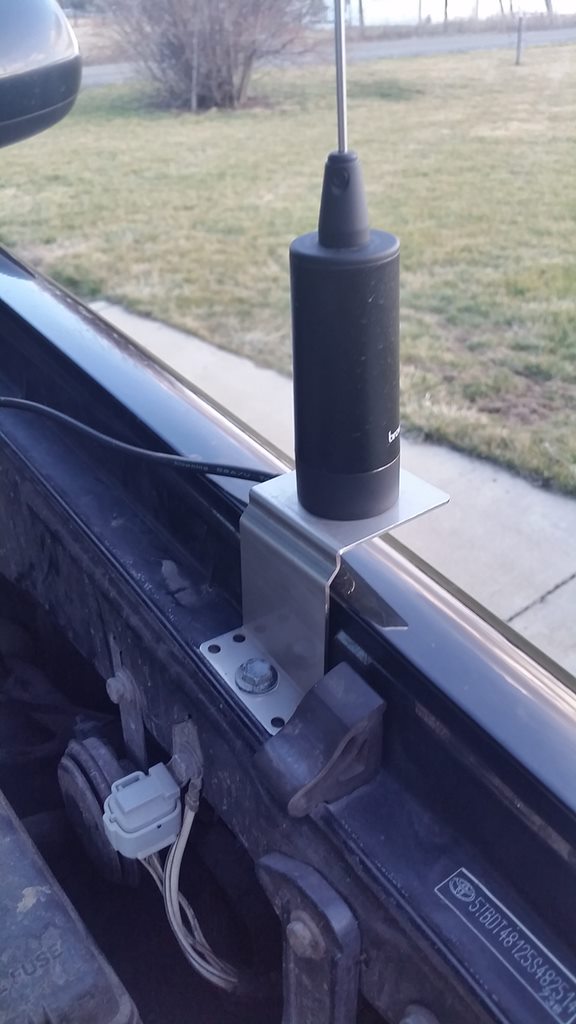 I routed the coax past the rear of the hydraulic hood lift so it wouldn't get pinched. I then routed the coax through the firewall. On my truck there was a piece in the existing rubber grommet that looked like it was there for this purpose. I clipped off the tip of the rubber, opening a hole, and fished the coax through. On the coax cable I bought I had to remove the PL-259 end in order for it to fit. I got rid of all the excess cable this way too. 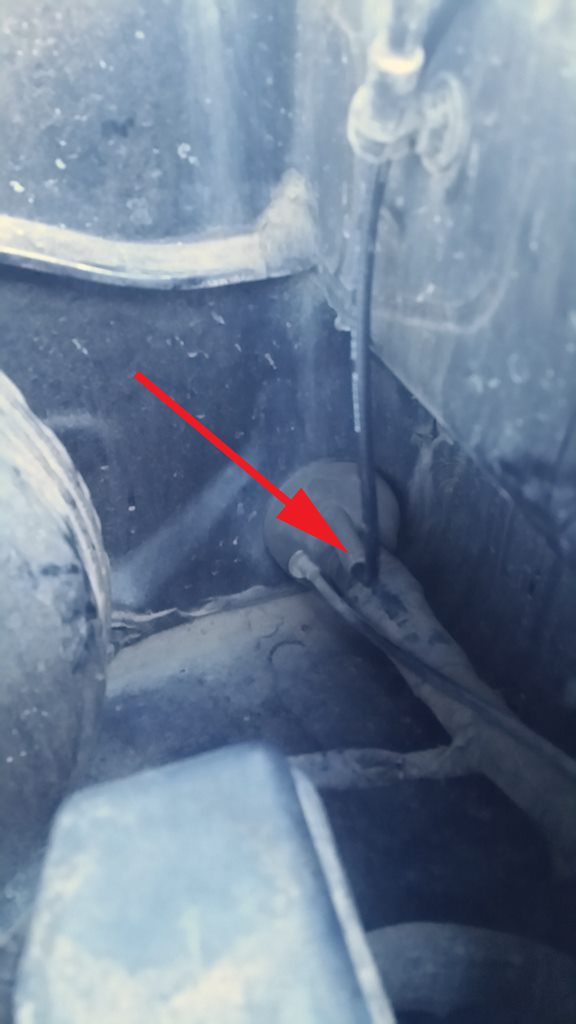 I routed the cable under the lower edge of the dash and behind the center console. The cable lays on top of the tray and terminates around the cup holders. I soldered a new PL 239 connector on, then attached it to the 239-SMA female adapter and then onto the radio. 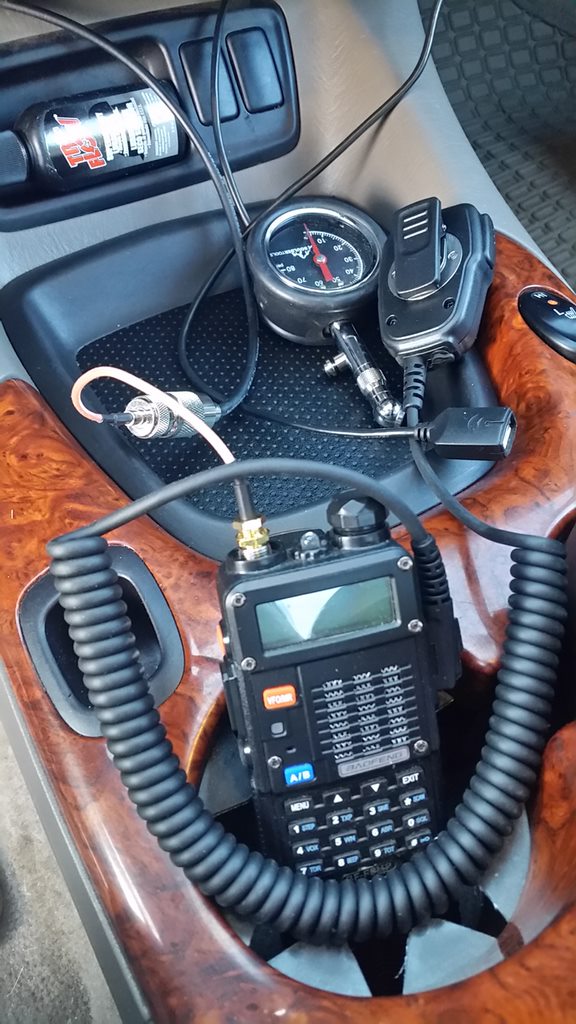 The reception is much better, but I notice that if I'm moving the signal cuts in and out a lot (picket-fencing I believe?). If there is anything you ham's see that needs to be changed or improved please let me know. I'm very much new to all of this. I couldn't mount it on the roof due to interference with the garage, so the hood mount was the next best option. 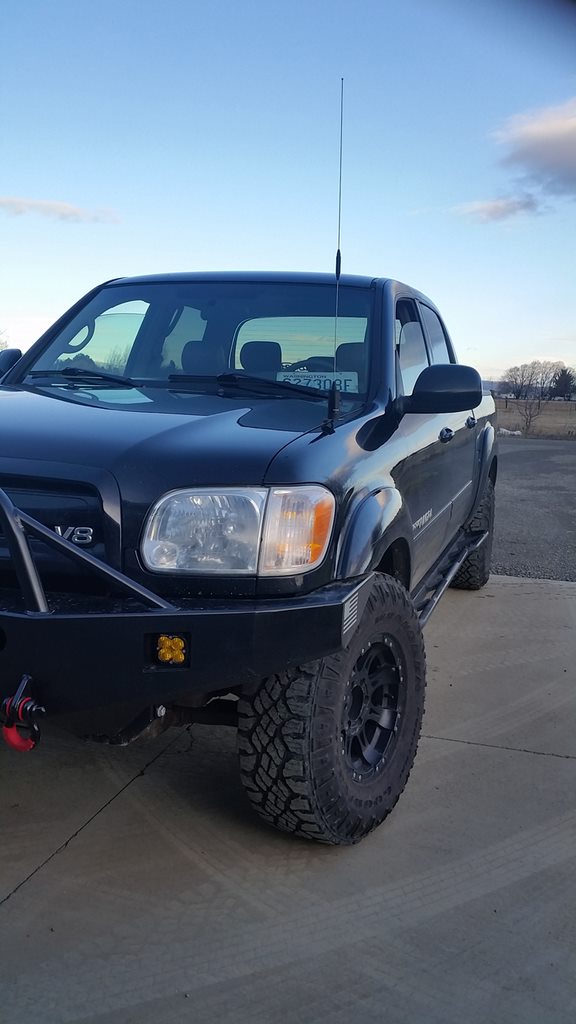 Kpack, thanks for the write up. Installing my bumper this weekend. Very straightforward but good to have some reference. The welds and build quality are amazing! Can’t wait to get it bolted up. All parts are removed, rust repair tomorrow and bumper goes on Monday.

Question: did you red or blue lock tight your bolts? I’m thinking blue but wanted to see what others have done

Honestly I didn't use Locktite at all when I mounted the bumper. I wasn't sure if I'd have to remove it to get the winch hooked up or not so I didn't bother with it. Perhaps I should go back and use some blue on the hardware?

So I've been struggling with an annoying noise for quite some time. In the past it was more in the background but now it's getting worse and is driving me nuts. I can best describe it as "whomp, whomp, whomp, whomp..." that follows speed of the wheel, not revs on the engine. It's getting to the point that I can feel a subtle vibration in the steering wheel (not like an out of balance tire), and in the gas pedal, and in the floor. Best noticed anywhere between 20-40 mph. Feels very smooth at highway speeds (65+).

I took it down to my nearest Toyota dealership and they swapped wheels/tires with a stock set and it appeared the sound/vibration was gone. I only got to drive it around a couple of blocks though. Not knowing if it was the tires or the rims, I decided to try some centering rings (my rims are lug-centric apparently....Raceline confirmed that on the phone) to see if that solved it. It didn't. Maybe the truck felt a little smoother on slow speeds, but that was it.

The wheels and tires were balanced 3 times in the space of two weeks, one of which was road-force. It didn't make a difference. They said each time that the wheels were out of balance. Two different tire shops took a look at the tires (Goodyear Wrangler Duratrac 285/75-16) and they saw no problems...no feathering, cupping, etc. The shop I bought the tires from didn't seem willing to help out much with a replacement set should that be necessary. The tires are just over a year old, less than 10K on them with tons of tread, rotated on time. Running 35 psi on all four. Truck has been aligned twice and is straight as an arrow on the road. I should mention that it was making this sound on my old set of tires (well-used Nitto Grapplers) and seemed to go away once I put the new Duratrac's on.....for a while.

I want to get the problem resolved, but don't want to keep throwing money at it if I don't know what's causing it.

What do you think? Wheels? Tires? Or am I completely wrong and it's something like driveline, CV axles, or transmission? I'll look into any possibilities.

I can't recall if that's the same issue I had in the past. I was chasing driveline issues with my 02 for a while and eventually it was Slee Offroad that recommended having the driveshaft rebalanced. Just something else to consider if you've looked at everything else.

That is so frustrating.

Here is what I would do.
First establish a baseline. Purchase a set of Toyota wheels and tires off craigslist. Should not be difficult to find a set of take offs for less than 250.
Swap them in and drive for a week. If you no longer hear the sound, the problem lies in your Raceline/Duratracs.

If the sounds returns, you can eliminate the Raceline/Duratracs as a possible issue and start digging into drivetrain stuff.

Btw, have you figured out your radio picket-fencing yet?

I’ve got a similar sound in my 05 DC that I hear from time to time and I’m not sure where it’s coming from either. I’ll be following this to see what you figure out. I’ll also let you know if I figure anything out

trailscape said:
I can't recall if that's the same issue I had in the past. I was chasing driveline issues with my 02 for a while and eventually it was Slee Offroad that recommended having the driveshaft rebalanced. Just something else to consider if you've looked at everything else.
Click to expand...

I was thinking driveline, which is why I had Toyota look at it. Unfortunately they were short-staffed that day and only swapped tires/wheels. Then it took them an hour and a half to get them back on. I stuck a GoPro underneath to see if I could see any obvious problems while driving, but I didn't see anything that wrong when I reviewed it. I'm considering dropping the driveline and taking it to a not-so-local driveline shop to have them take a look.

Here is what I would do.
First establish a baseline. Purchase a set of Toyota wheels and tires off craigslist. Should not be difficult to find a set of take offs for less than 250.
Swap them in and drive for a week. If you no longer hear the sound, the problem lies in your Raceline/Duratracs.

If the sounds returns, you can eliminate the Raceline/Duratracs as a possible issue and start digging into drivetrain stuff.

Btw, have you figured out your radio picket-fencing yet?
Click to expand...

There's a used set not too far from me I might look into. I'll check and see. I did some reading on the picket-fencing and it sounds like it might just be due to my radio being a cheap Chinese HT. I'm sure if I had a decent mobile radio it would pick up signals better. But I'm not sure how much I'll be using it so I can't justify the expense yet.

I think there might be a partial improvement on my vibration issue. I did some looking under the truck and remembered that the double cardan joint hadn't been lubed since I bought the truck.....it's embarrassing I know. I didn't have a fitting for the grease gun that would get into those tight spots and then I just forgot about it. So, finally bought a needle nose fitting (not a needle) and pumped it with moly lube. It took a good amount on all three zerks. Went ahead and re-lubed all the other parts of the driveline and took it for a test drive. I think it sounds and feels better, though there is definitely still some vibration there...just not as pronounced as it was.

I'll continue driving and listening for the next few days and see how it settles out. I still think there might be something going on with the tire/wheel combo, but we'll see.

Are all you Tundra/Tacoma guys running lug-centric wheels or hub-centric? It seems most aftermarket wheels are lug-centric 108mm center bore...the Tundra has a 106mm hub. Right now I'm using adapter rings but they don't seem to make much difference.
Last edited: Mar 6, 2018

Well, re-lubing the driveline didn't do much unfortunately. The vibration and noise is still there.

Took it to the shop I normally use and they can't figure it out. Everything sounds fine with the truck in the air....driveline, transfer case, both diffs, bearings, etc. I'm not sure they're quite on the same page as I am regarding what it sounds like and what it feels like. They couldn't really hear it much when it was on the road. I can hear it and feel it clearly, but maybe I'm crazy. All I know is it's definitely getting worse and it's annoying to drive the truck when all I hear is "whomp....whomp.....whomp..."

I was thinking maybe rear bearings as the front two are brand new, but the shop put the stethoscope to them and said they sounded fine....then again, there wasn't any load on them at the time.