It's interferes with 2.5 coilovers
Check my page on IG or here in expo. I did a few photos and info on what parts you need. 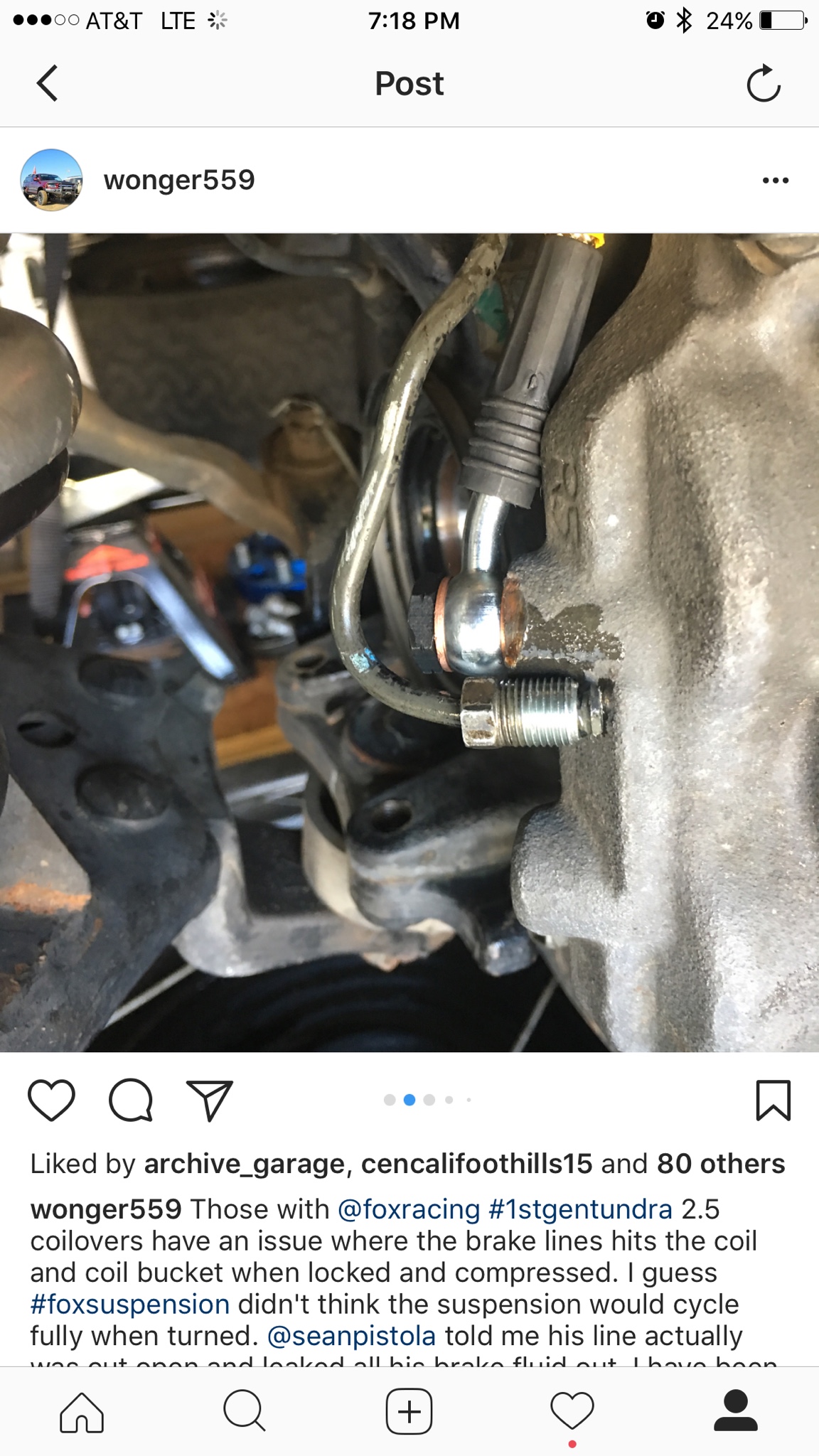 Thanks for the pics Kpack. That looks really good. I'll definitely look into doing that.

Well, today I got a start on the front suspension. I'm afraid it was as bad as I was afraid it would be. When I did the rear shocks and new sway bar links I ended up having to cut everything off due to corrosion. Still, I had high hopes that it would go smoothly today. It didn't.

First I removed the castle nut from each upper ball joint to start separating it from the UCA. And that's where the fun ended. The UBJ's would separate from the UCA. Lots of pounding, heat, PB Blaster, etc didn't do it. I went to Autozone and rented some tools to help, but none worked. Went back to Autozone and bought a pickle fork and pounded the heck out of the ball joint with it....and finally they popped loose. Of course it destroyed the ball joints, but they were both torn and I'm replacing them with Camburg uniballs.

Then I got to spend a few hours trying to get the UBJ's out of the spindles. The Autozone press is huge and very difficult to fit for the application. I ended up taking off the calipers to gain more space, but even still it was super hard. Lots of heat, pressure, PB blaster, and a 4-foot cheater bar finally broke them free. What fun! 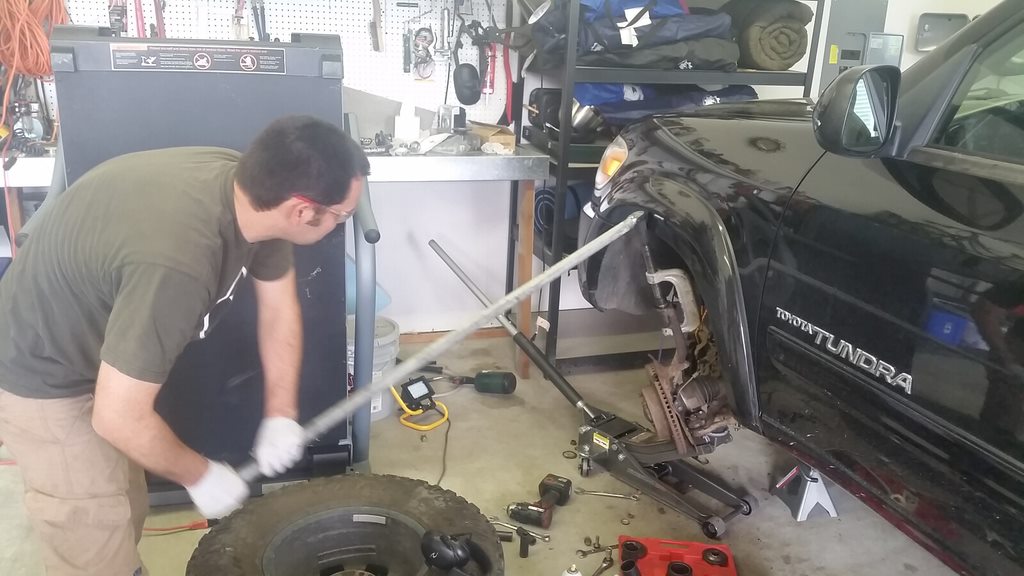 Got the new Camburg adapter pressed in without too much trouble.

Then went to the UCA's and started getting working on getting those off. Passenger side was uneventful thankfully. Drivers side the bolt was seized to one of the inner sleeves in the bushings. Lots of pounding, PB blaster, ratcheting, and finally impact guns finally broke it loose. You can see where it was seized:

Next was the old shocks. The upper nuts had been soaking in PB Blaster for several days, and came off with just some minor coaxing (hitting an end wrench until they released). Then I moved to the lower shock bolts. The passenger side was again uneventful. The drivers side, on the other hand, was/is a nightmare. The bolt was again seized to the inner sleeve, inside of the rubber bushing. Long story short, it is still in there, minus the rest of the shock. It is laughing at me. Lots of heat, PB Blaster, pounding, sawsall, etc....nothing worked. I'll get back at it tomorrow night. We fought bravely today but in the end had to admit defeat.

On the plus side, we did finally get the passenger side together. Here it is loosely in place, not torqued. 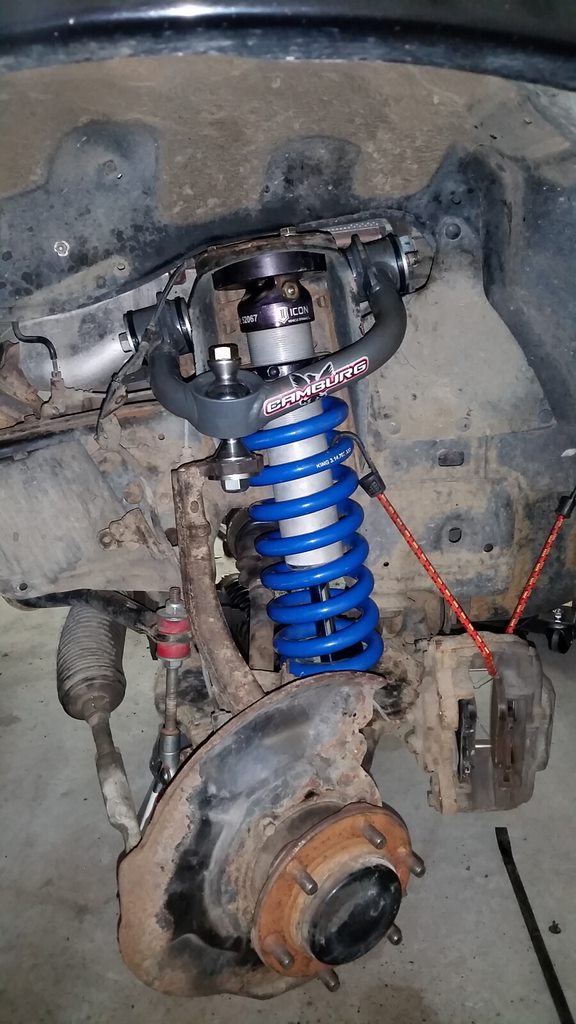 Hopefully I'll get everything back together tomorrow. Then I'll take the truck, my new OEM lower ball joints, and new MOOG inner/outer tie rods, to a shop and let them deal with it. I learned today that this truck is very difficult to work on due to the corrosion. I just don't have time to spend 9 hours on a project and still not get it done. The shop will be able to get it done faster and with the right tools. I'm learning a ton by jumping in on these projects, but I'm also learning that with my experience level some things are best handled by pros. Hopefully it will be better once we get all these new parts in!

It's been a year or two since I did my G3 4Runner suspension, which is very similar, but did you try one of these for the ball joints? I know I used it for the lower and pretty sure I did for the upper.

Have used it on both my old 4Runner and my wife's TSX and it works very well without damaging the boots as long as your careful.
B

I had poor experiences with the moog inner and outer tie rods. The supplied bolt was too soft and stripped out. Ended up replacing with another moog outer end using OEM castle nut. Consider OEM since your already in there. I wish I did.
L

KTempleton said:
Whoa! I kinda like the blue on black. I see they are 700's any info on the length of the coil? I'm due for a rebuild on mine and was going to do coils while apart. I think I can tackle myself though. Good looking truck. Almost the exact same set up as mine.
Will be pretty damn close when it's all said and done.
Click to expand...

I have a 2000 AC and had the exact same issue on the driver side lower shock bolt. I legit sat there with an impact and would hit it for 5 minutes, and then torch for 30 seconds and then hit for another 5 minutes for almost an hour before the bolt broke free. It was the longest pain in the ***. I didnt cut the shock off, but it was almost getting to that point.

Loubaru said:
It's been a year or two since I did my G3 4Runner suspension, which is very similar, but did you try one of these for the ball joints? I know I used it for the lower and pretty sure I did for the upper.

Have used it on both my old 4Runner and my wife's TSX and it works very well without damaging the boots as long as your careful.
Click to expand...

I rented one of those from Autozone. It didn't work on the upper because it was not long enough to hold in place. I would think something like this should work better on the LBJ's and tie rods. Pickle fork worked great, but don't plan on saving any part of the ball joint if you use it!

blueranger501 said:
I had poor experiences with the moog inner and outer tie rods. The supplied bolt was too soft and stripped out. Ended up replacing with another moog outer end using OEM castle nut. Consider OEM since your already in there. I wish I did.
Click to expand...

I looked into getting OEM all the way around, but decided to at least try MOOG for the tie rods and see. I was not going to take that chance with the LBJ's though....only OEM there as far as I'm concerned. The OEM outer tie rods weren't too bad, but the inner's were upwards of $150 a piece. That swayed my decision towards MOOG. Worst case scenario I find the MOOG parts don't work out and I replace them with OEM.

That's what I did. Now I have spares!

I wouldn't even waste my time on inner tie rods. You probably need a new rack and pinion anyways. If the bottom half of the boots look wet/darker than the rest. The seal is already leaking.

toyotech said:
I wouldn't even waste my time on inner tie rods. You probably need a new rack and pinion anyways. If the bottom half of the boots look wet/darker than the rest. The seal is already leaking.
Click to expand...

Well...shoot. That just about describes what it looks like to a "T". Looks like Lance and I are in the same boat then, on the hunt for a new steering rack.

It's been a little too long since I updated this, so let me pick up where I left off. After a full day's worth of work we didn't get everything off the front end. The driver's side lower shock bolt was completely seized inside the inner sleeve that the lower shock bushing surrounded. No amount of PB Blaster, heat or anything could shake it loose. So out came the sawsall. We cut the bolt and also cut the shock mount off and were left with this:

The rear part was tight up against the rear mount, with no room to get a blade into. The next day I went at it with a grinder and ground down the remainder of the bolt head on the opposite side of the mount. It was extremely difficult to find room to get a grinder in there. Finally I took a Dremel with a metal cutting disc and removed the final bits that were keeping the whole thing from coming off. Success at last! 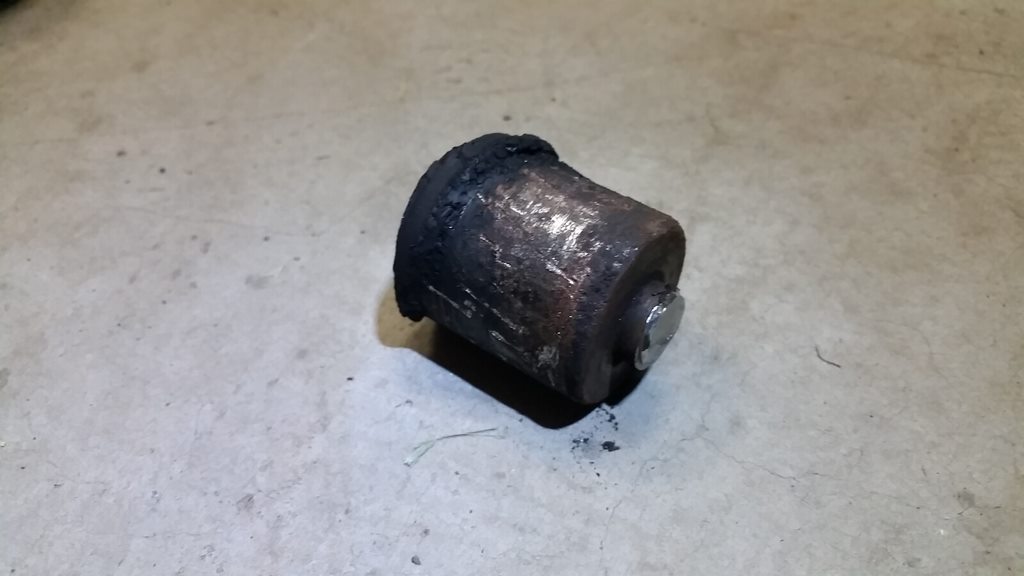 From here I got to work getting the coilovers in, as well as the Camburg UCA's. I removed the factory mounting for the ABS line to the UCA, and replaced with the fittings that Camburg had in their kit. Zip tied the brake line mount back to the spindle, because the original bolt that held it there was broken off on both sides. Torqued everything down, got the wheels back on, dropped it to the ground again. The increased droop meant I had to lift the truck up several more inches off the jack stands in order to get the tires back on. A quick test drive confirmed everything was good, and surprisingly the alignment felt alright.

Dropped the truck off at the shop the next day to have them do the lower ball joints and tie rod ends. I ran out of time to mess with them. I gave them brand new OEM lower ball joints, and MAS outer tie rods, and MOOG inner tie rods. I didn't feel comfortable with anything but OME on the lowers. And it definitely needed to be done. The driver's side was squeaking a ton and the passenger side was puking grease everywhere. Peace of mind having all new parts here:

Truck sits much better now, basically level and far more stout. The ride is a bit stiff with the 700lbs springs up front, but it should get better once I get the bumper and winch on. The Icon's raised the front about an inch over the previously installed spacer lift.

Next up is tackling the leaf springs in the back. I already have the Icon 2.5's installed back there, just need to remove the factory leaf's and block that PO added, then install the Wheeler's AAL's I got from Lance.

Where in WA are you? I'm in Puyallup