I've been a lurker on here for a while and have been admiring all the excellent builds. I picked up a very used 2005 Tundra 4 door 4x4 a few years ago and have been looking around for ideas on what can be done with it. Other 1st gen Tundra builds from people such as seanpistol, lhanson, and toyotech to name a few have inspired me to finally do something about my truck.

Here's what it looked like when I bought it: 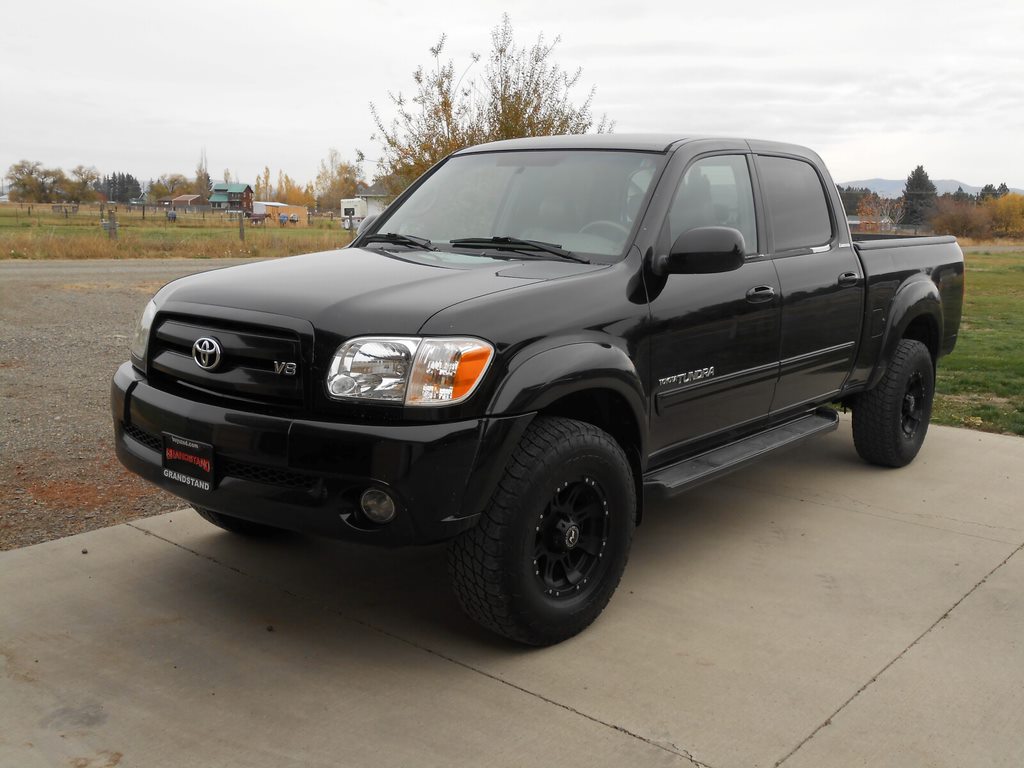 First item on my list was to do something about the surface rust on the underframe: 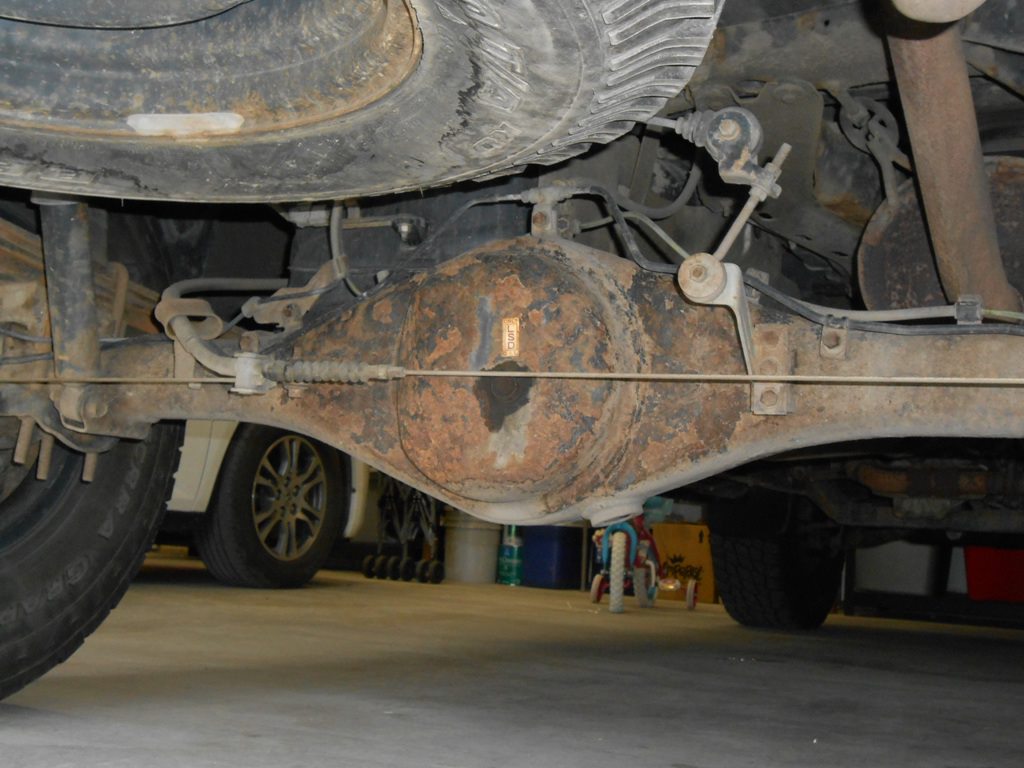 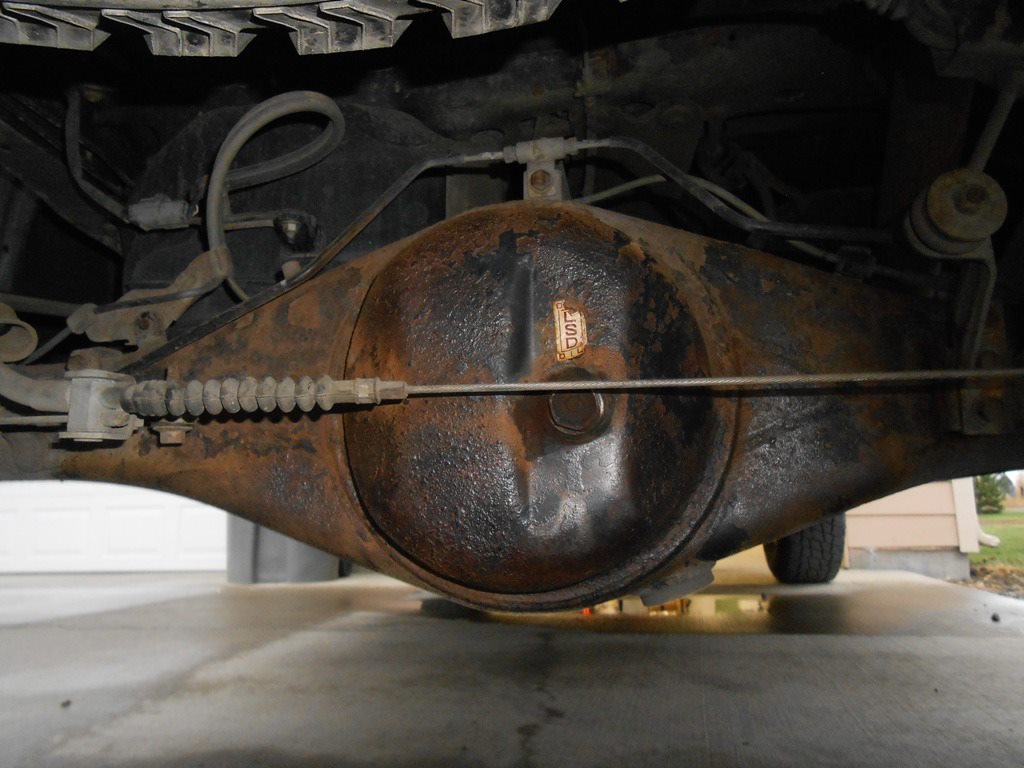 Some rust converter and Rustoleum 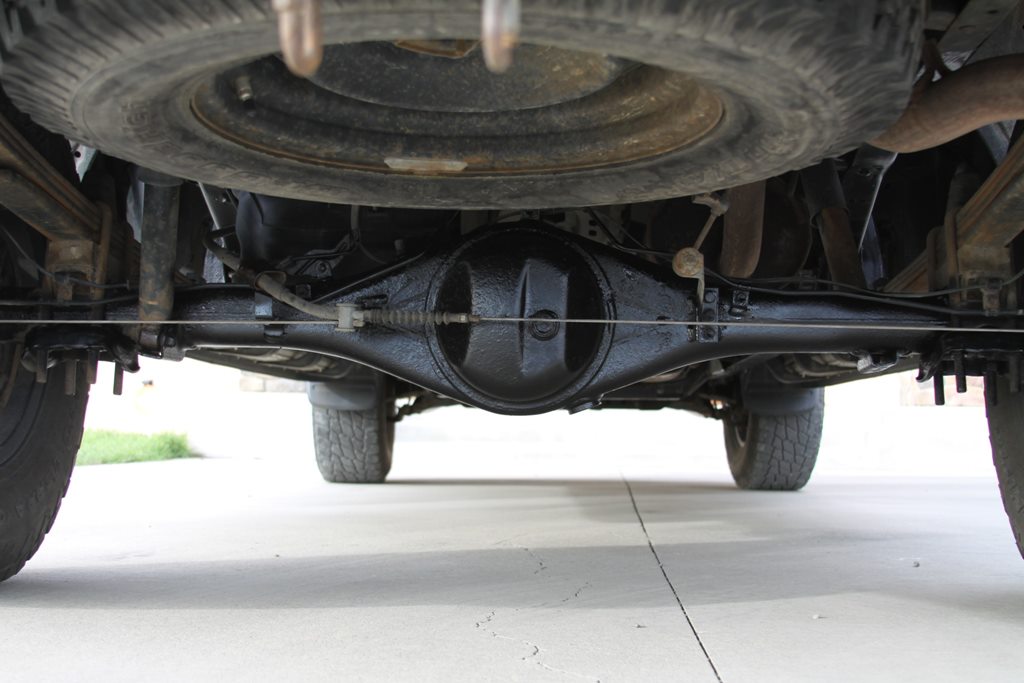 I did this to whatever areas I could reach on the frame at the same time. Unfortunately two years later the work I did isn't standing up to mother nature, and I'm beginning to see surface rust again.

I'll try to get up to date over the next few posts!

Soon after I decided to get rid of the factory running boards. They had always bothered me...seemed like they got in the way more than they helped. Getting them off was easy enough. And I was able to send them to a guy several states away for him to use.

Much better without them: 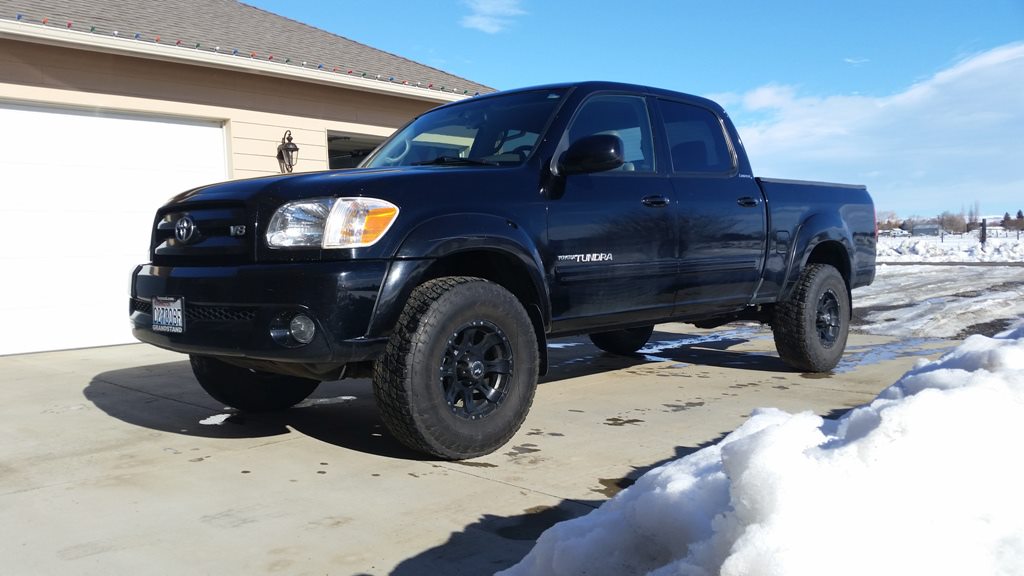 Swapped out the factory HU for a Pioneer. Much better. Still need to bypass the factory amp though....since my install it has been causing problems with random balance and fade issues. 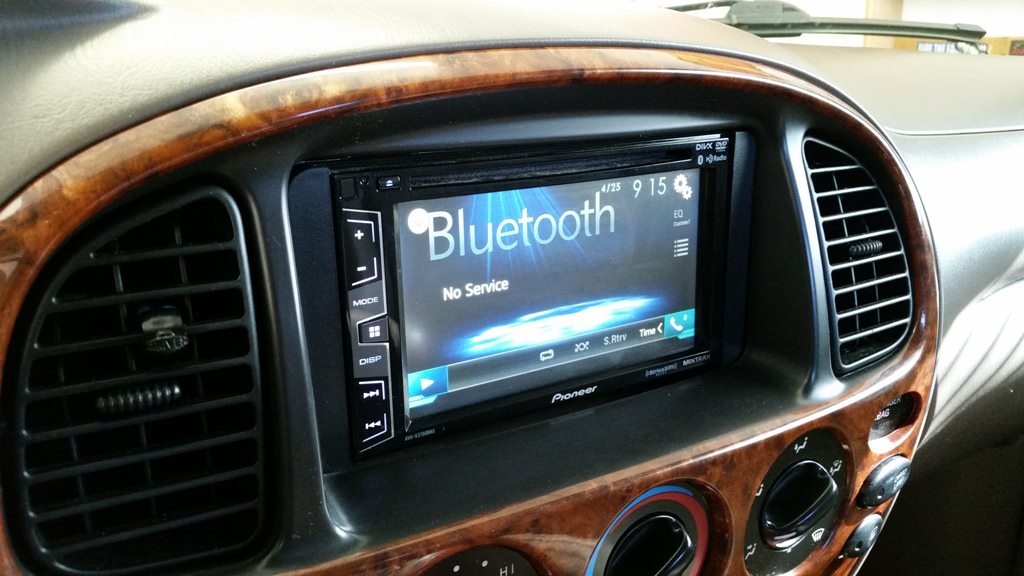 Noticed that I was getting coolant all over the engine while towing: 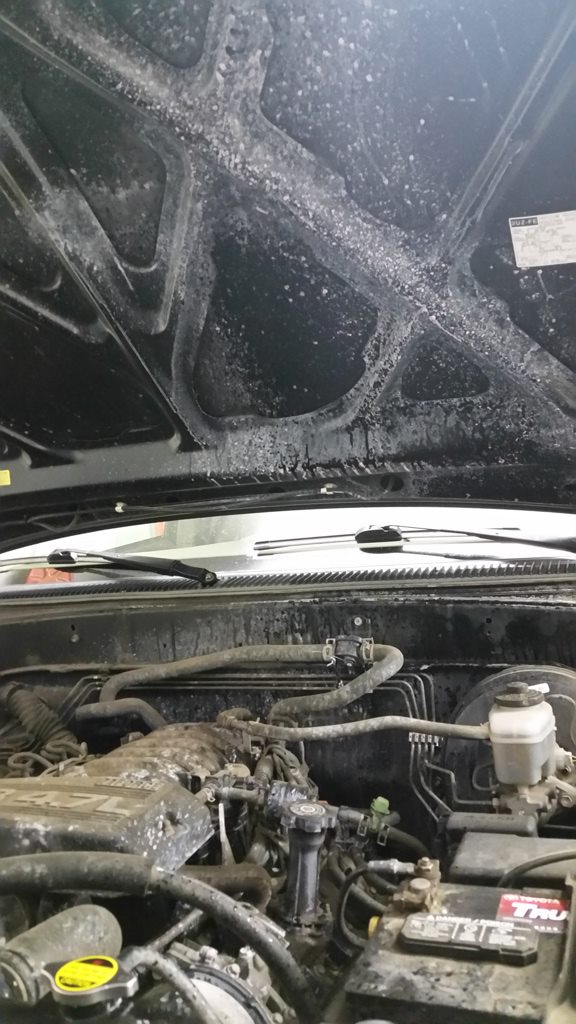 Finally tracked it down to gases getting into the cooling system when the engine was over 3000 revs. Blown head gasket unfortunately. Got that fixed as well as new exhaust manifolds and gaskets. Finally fixed the super-annoying tick that was always present.

I got tired of the worn-out Nitto Terra Grapplers that a previous owner had installed, and after lots of research I went with Goodyear Wrangler Duratracs in 285/75-16. So far I've really liked the tires, and especially in the snow (which we had several feet of last winter). 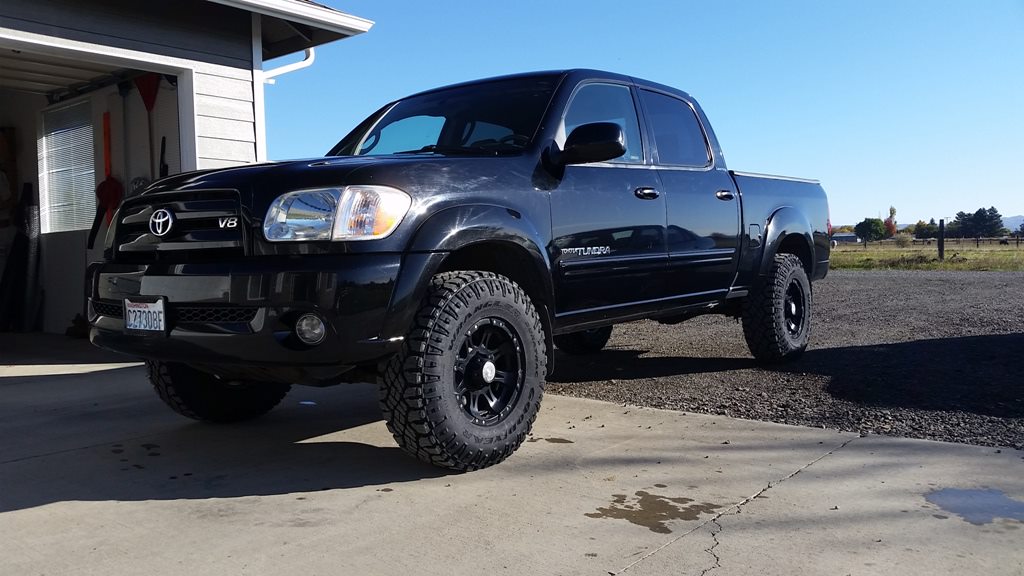 Also got tired of seeing the pea-soup green lights inside the cab, so I pulled the guage cluster and sanded off all the green film behind the panel. That exposes the white LEDs, giving it a much better look. At the same time I replaced all interior bulbs with white LEDs. While it was all apart I taped off the annoying flashing TPMS monitor light....I have no intention of replacing all the factory pressure monitors. Much better now. 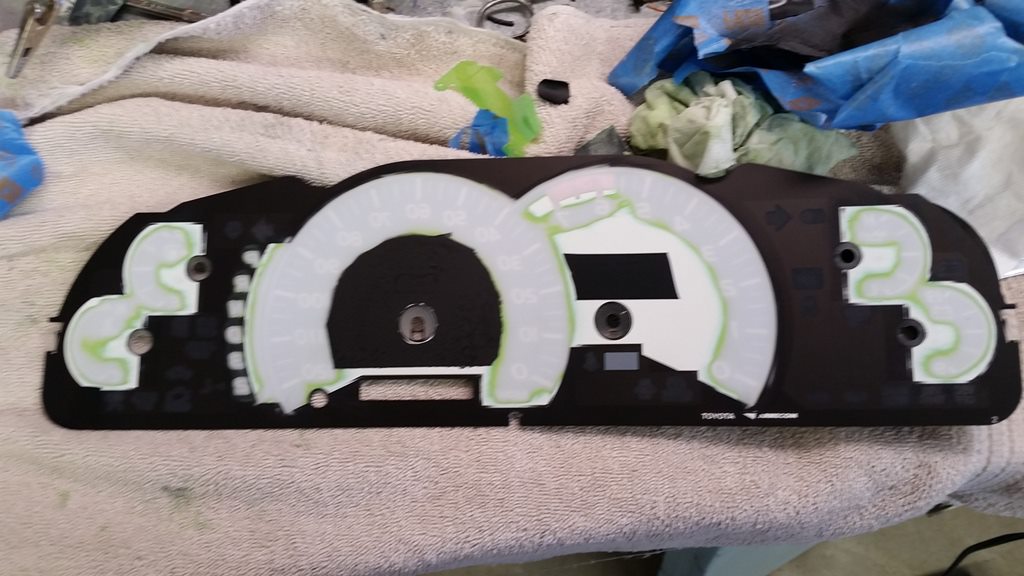 I found some time to take it out on some local Forrest Service roads, had a great time but eventually had to turn back due to snow.

I took the family out for a mild off-road adventure and the kids had a blast. They raised their hands over the heads for every big bump and were giggling the whole time. Lots of fun. 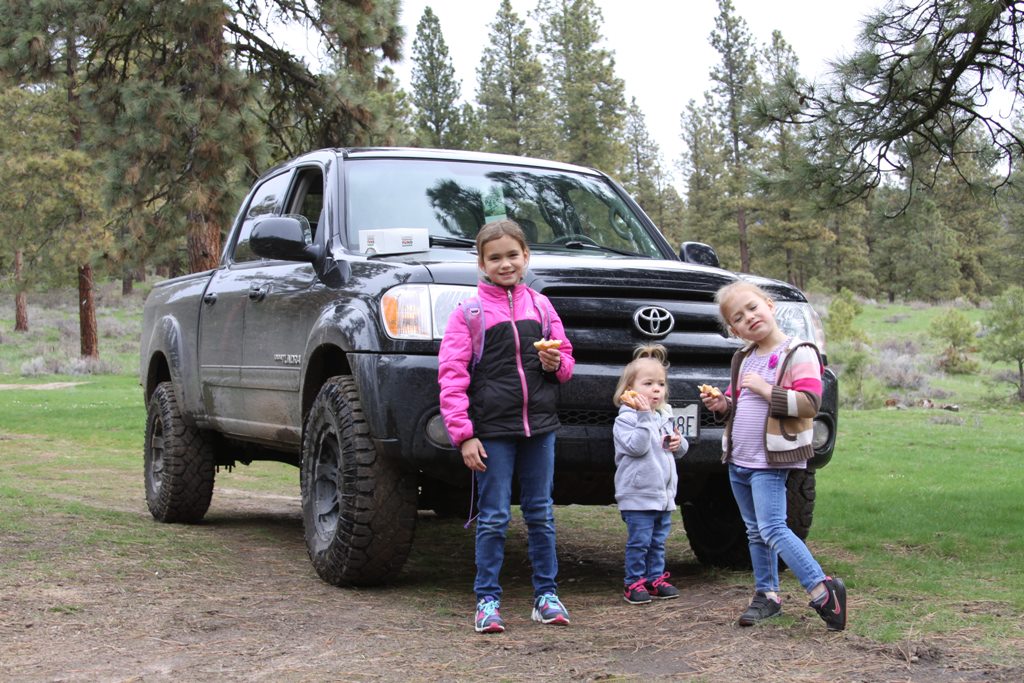 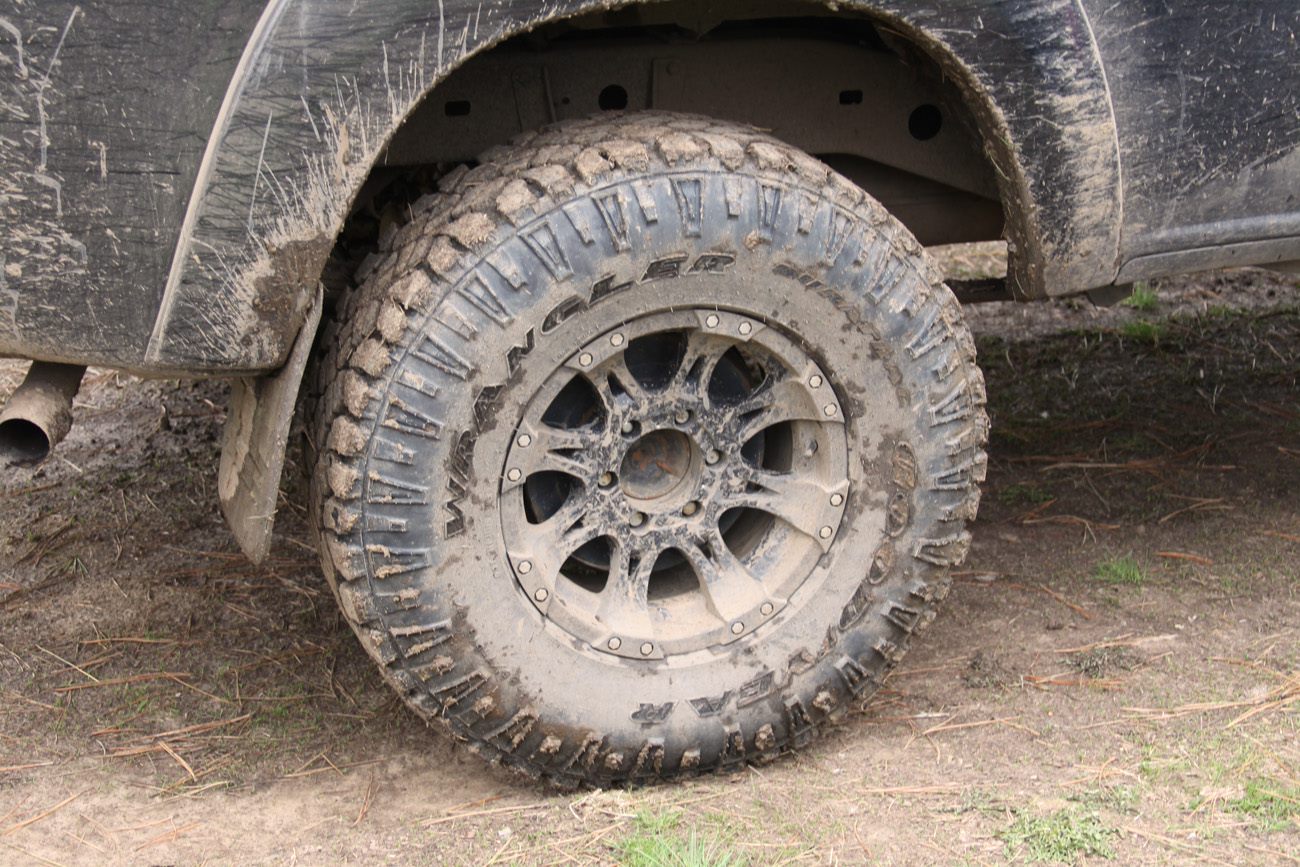 Around this time I decided that I need to decide what direction I was going to take with this truck....build it for family expedition and moderate off-roading, or leave it as is. I decided to start making moves towards a mild expedition build and that brings me up to the present. Lots of reading, research, and following other build threads got me moving the right direction. Here's what is in the works now:

More to come in the next few days!
D

Glad I could give you some inspiration. Excited to see your build get under way. Your list of mods looks great minus the question mark next to the winch. Highly recommend investing in that before the spod and aux lights. You can go affordable and reliable like a warn m8000 steel cable or a superwinch tiger shark 9.5 with synthetic rope. Highly recommend going synthetic rope for it is strong and way safer. If you have any 1st gen tundra questions don't hesitate to ask

I have a rear third member with 4.56's that I pulled from my truck with the trd limited slip I am looking to get rid of if you are interested. That generation of double cab in black looks great.

On the CD player install did you set the factory CD player to '0' for all of the fade/balance/base/etc. before pulling it? Also, are you using the wiring adapters to tie into the amp and steering wheel controls? I recently installed a very similar CD player (might just be the newer version of yours) in my 2006 and didn't have any issues but I used the wiring kits. I also read some stuff about the fade/balance/etc. settings being stored in the amp itself instead of the deck so zero'd everything out before pulling the factoring deck.

How are the tires working out for you? Thats never I size I've considered but looks good. How much rubbing are you getting on the factory suspension? Noticeable power loss?

Jnich77-good info, I'll check around to see if any local salvage yard have any v6's. Aren't those fairly rare though?

Lance - thanks again for all the advice. I am leaning towards the tiger shark 9.5S. I may not use a winch much, but when it's needed it'll be good to have one. I certainly don't want to have to remove the bumper again to install a winch later.

Sean - with 33's, what gear ratio is ideal? I tow periodically, if that makes a difference. I'm not sure but I think the 1st Gen comes with 3.91? I believe my truck has the tow package so I'm not sure if that is different.

LouBaru - I did zero everything out before I installed the stereo, and I'm using the harness that Crutchfield supplied. I'm assuming that the factory amp is the problem. I just need to get a new harness that bypasses the amp completely.

I really like the tires. Surprisingly quiet for how aggressive they are. And they rock in the snow.

A previous owner had installed some mild suspension mods and the rims I am currently running. The rims are Raceline, but I don't know what the backspacing is. I know I have more room with these rims than stock. I still get rubbing on the frame at full lock. I was rubbing on the mud flaps until I removed them. I can't comment on the power loss because I haven't driven a stock tundra. It seems okay to me, but I have nothing to compare it to.

Suspension will soon change. Previous owner installed a 1.5" block on the back and spacers in the front. Can't wait to get rid of those spacers!

I consider the sweet spots to be

They are a little over geared compared to stock but it makes the truck drive great, if my memory is correct, the speedo reads 10% fast.

Thanks for the info. I assume the higher gearing helps with towing as well?


Continuing on, while I gather all the materials to start turning this thing into a mild expedition vehicle, I have been taking care of some house-cleaning items. My truck had a lot of little body damage done to it by the previous owner....dings all over the bed, tailgate, bent rear bumper, some dents, and some peeling clear coat on the tailgate. It was driving me nuts with how beat-up it looked. Ordered a replacement rear bumper from somewhere on Ebay for ~$200. Eventually I would like to do a high-clearance rear bumper with swing-out but for right now I have my truck budget tied up in the front bumper and suspension. Plus I want to retain the factory hitch for towing. 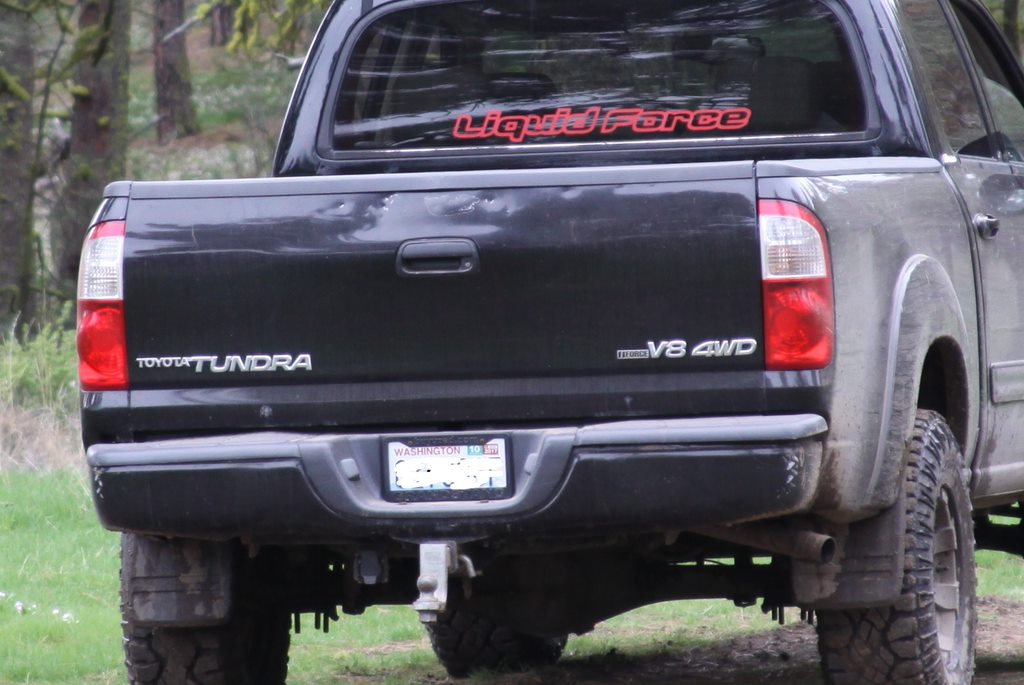 A friend and I got the old bumper off. Wow, what a chore. The bolts were all rusted. The two large ones by the license plate needed a breaker bar with a 4-foot pipe to get them off. I had to use that until they were all the way out because the impact gun wouldn't budge them. Almost all the smaller bolts broke off as soon as the impact gun touched them. And this was after I had soaked them with PB Blaster. Look closely and you'll see some bolts still in there. 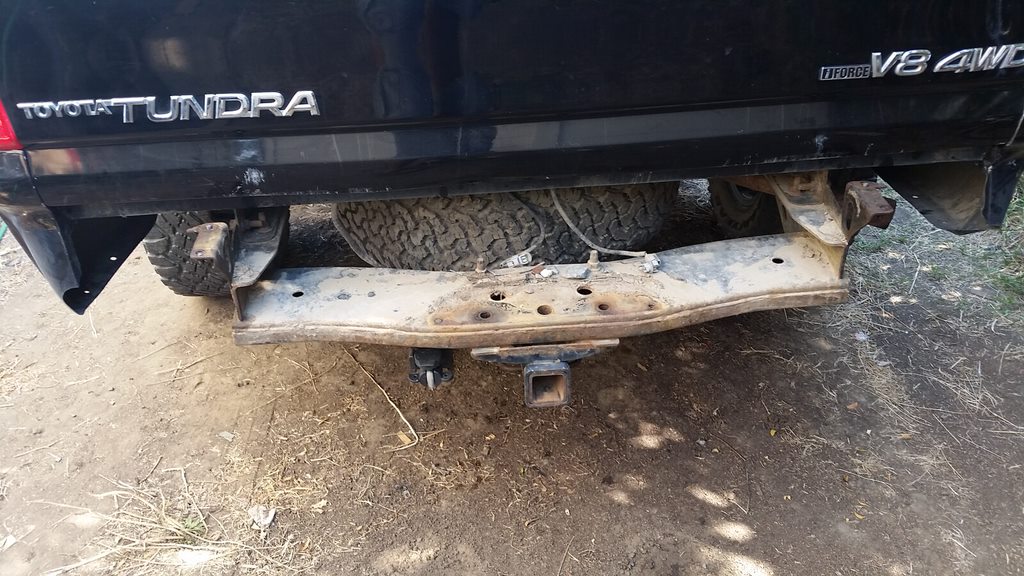 My friend took it after that to take care of the body work, and to drill out and tap the broken bolts. Prep work started: 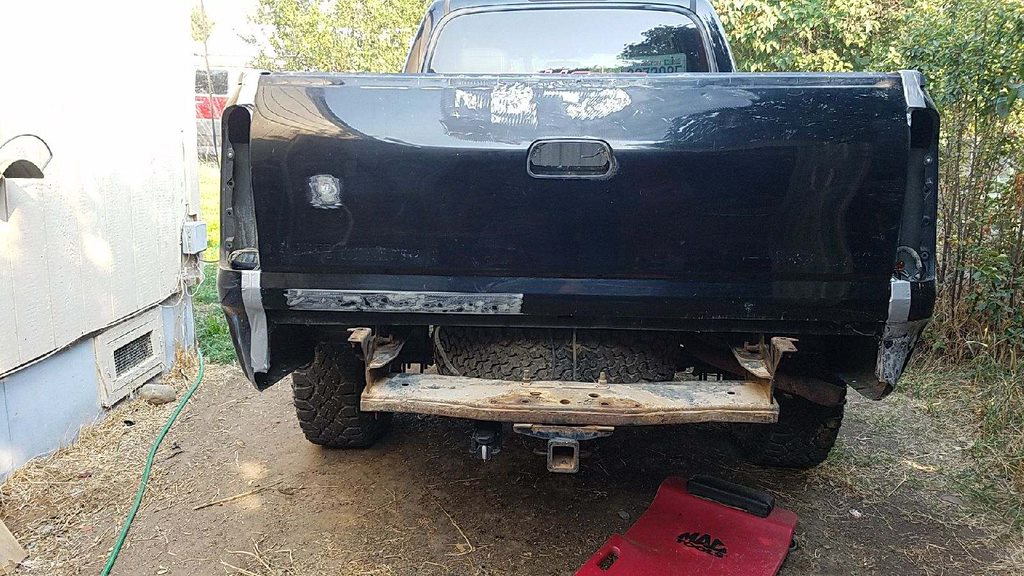 Gap is opened again, pounded out the large dent from the bumper strike: 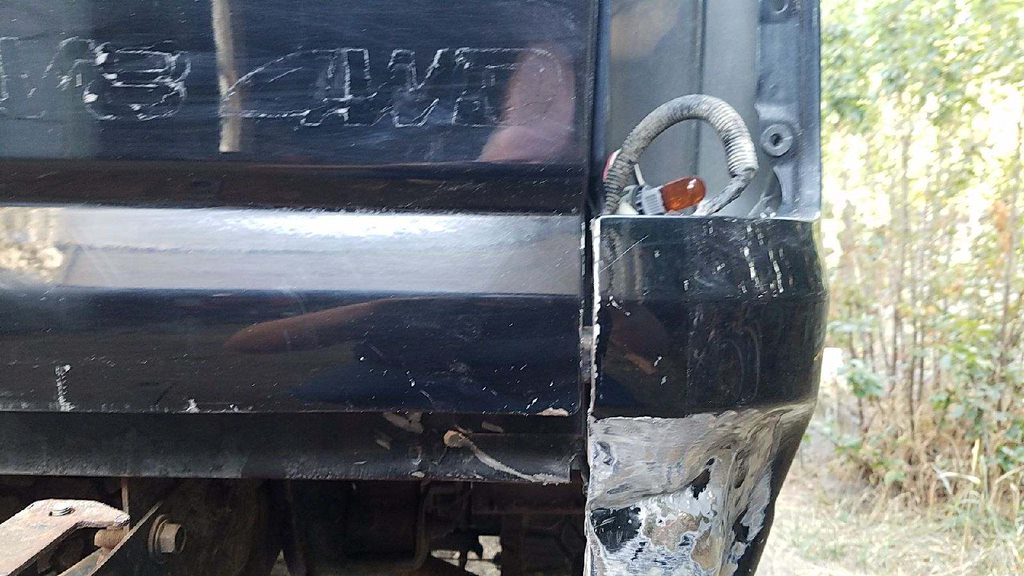 Body work done, everything sanded and prepped for spraying. 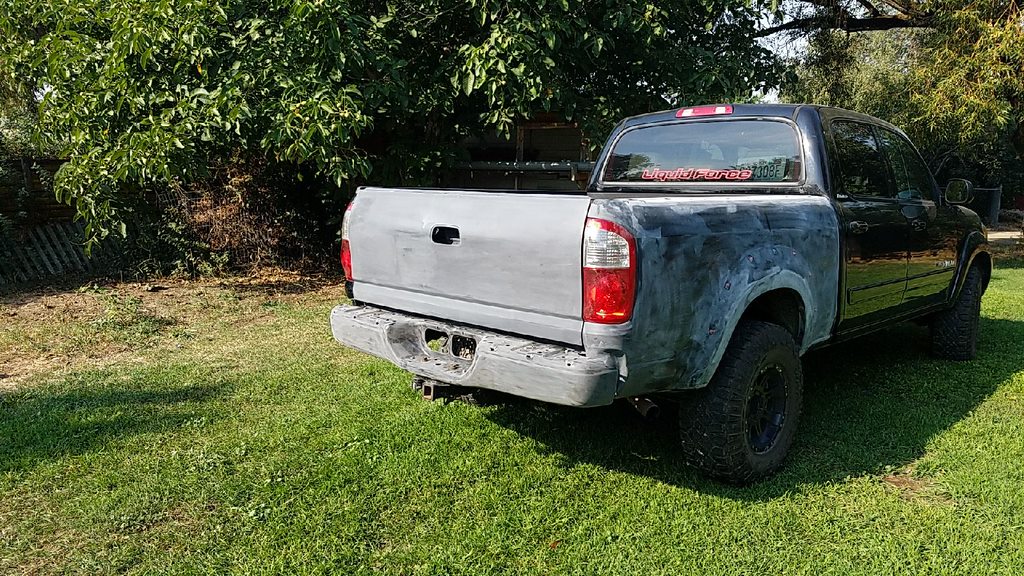 He took it over to a friend's place and used his spray booth to paint. I should be picking it up tomorrow. I'm not sure how top-of-the-line it's going to look, but it should certainly be better than all the dings, dents, and peeling paint. And having a bumper where the plastic isn't falling off due to it being bent would be nice.

Extra housings? I do have two extra now, so I'll bring them up this Saturday.

Yep, the extra gearing is great for towing. Just keep in mind that all the gains you get on the low end or when loaded are a tradeoff up top in gas mileage. My truck averages about 15mpg once you account for the different odometer reading.

Kpack said:
LouBaru - I did zero everything out before I installed the stereo, and I'm using the harness that Crutchfield supplied. I'm assuming that the factory amp is the problem. I just need to get a new harness that bypasses the amp completely.

I really like the tires. Surprisingly quiet for how aggressive they are. And they rock in the snow.

A previous owner had installed some mild suspension mods and the rims I am currently running. The rims are Raceline, but I don't know what the backspacing is. I know I have more room with these rims than stock. I still get rubbing on the frame at full lock. I was rubbing on the mud flaps until I removed them. I can't comment on the power loss because I haven't driven a stock tundra. It seems okay to me, but I have nothing to compare it to.

Suspension will soon change. Previous owner installed a 1.5" block on the back and spacers in the front. Can't wait to get rid of those spacers!

That sucks on the radio, sounds like you did the same install I did. Like you said factory amp must be acting up. If you bypass the amp don't you have to run new wiring to the speakers?

I didn't even notice the lift but now that you mention it I see the blocks. I'm not going to do my lift or buy new tires until summer but scoping out options now, your "in-between" tire size should be a good trade off between needing gearing and killing performance...at least for the 5psd Tundras. Good to see you fixing all of the previous owner's issues, these Tundras are a pain in the *** to find in good condition...
You must log in or register to reply here.
Share:
Facebook Twitter Reddit Pinterest Tumblr WhatsApp Email Link
Facebook Twitter Youtube Instagram
Top