60beforetruck said:
Pink plug rear blower? Where is that?
Click to expand...

Right rear quarter panel towards the tailgate. If you pull the panel back enough to get your hand in there, just above the floor, the scm is there with three connectors. Remove the middle pink one.
Last edited: Jun 25, 2019
R

I noticed the battery looked very new, so I tried to calibrate the HVAC. It worked and I was able to change the settings, but it didn't last long and is stuck on defrost again. 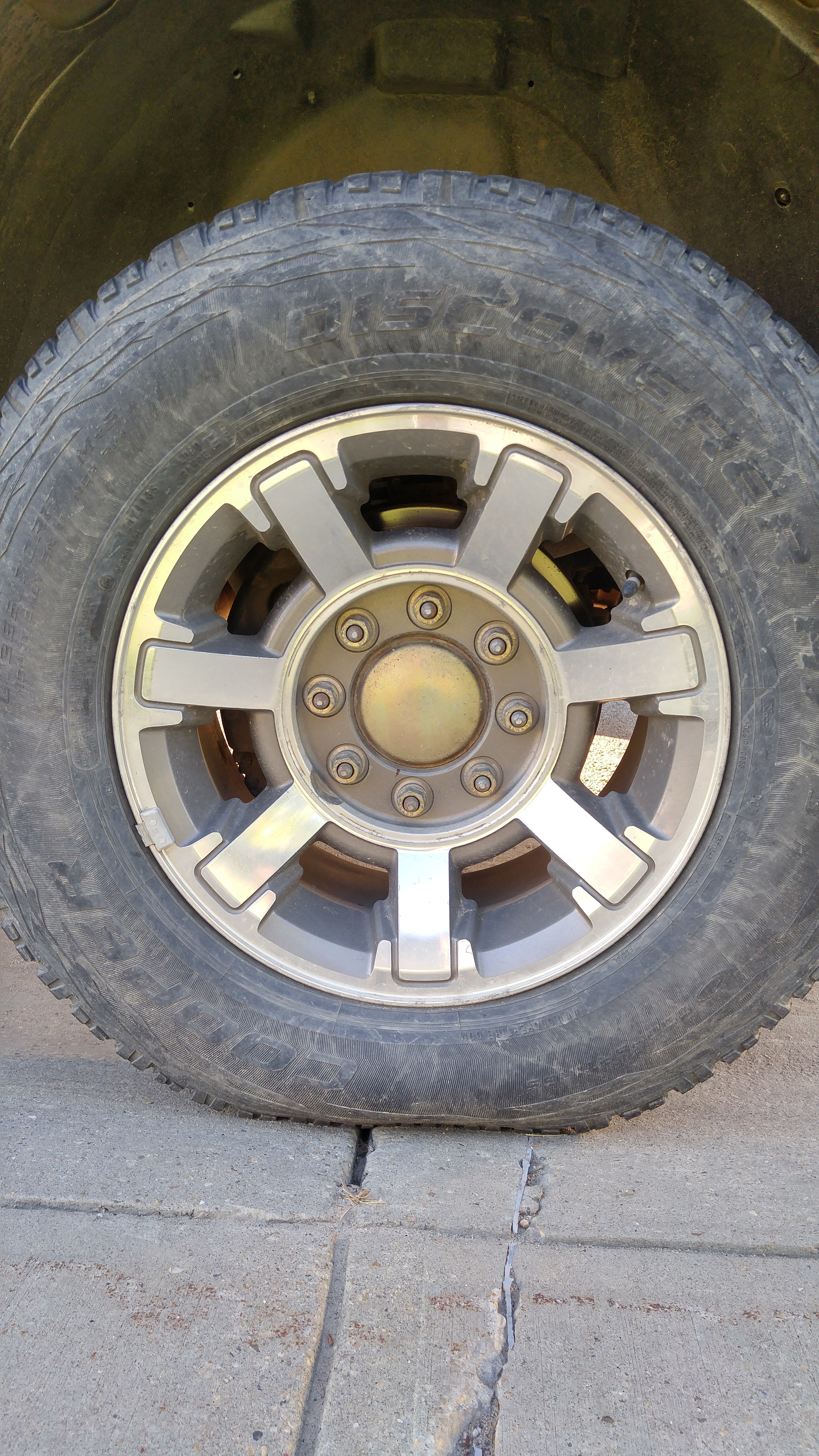 I also priced out the Husky floor liners. Yikes! $450 worth of floor mats!

RedF said:
I noticed the battery looked very new, so I tried to calibrate the HVAC. It worked and I was able to change the settings, but it didn't last long and is stuck on defrost again.

I also priced out the Husky floor liners. Yikes! $450 worth of floor mats!
Click to expand...

Have these on mine.

RedF said:
I noticed the battery looked very new, so I tried to calibrate the HVAC. It worked and I was able to change the settings, but it didn't last long and is stuck on defrost again.

I also priced out the Husky floor liners. Yikes! $450 worth of floor mats!
Click to expand...

Yeah floor mats are down right ridiculous if you get the molded type. BTW that is exactly what my HVAC controller does, even if I recalibrate it... Just goes back to "messed up" after a bit, thats why I mentioned the new Dorman unit, I've had it on the to-get list for a while.

So how do I troubleshoot between the HVAC controller and the mode actuator?

You've already done it. Disconnect battery, kill the saved info, reconnect and key on and you hear all the actuators swing thru their max range of adjustment as the computer re-learns the range of motion. Start the vehicle, get to operating temp. Set the controls to normal vent operation. Set warm adn AC temps and observe system responses. And then set to Defrost, observe response. Then back to other modes. See it it will leave defrost. If it won't 'there's your problem right there'
The drive gear in the defrost actuator is probably split and unable to drive the shaft/valve of the duct. You have to take out most of the dash and vent stack to get to that actuator.

One other thing to do when the actuator(s) are balky is do not set the max or min temp on the controls. That can overdrive the actuator to a position where its gear train binds or crosses a damaged area and then you lose response.

I've got a bunch about these actuators in my 'hey vortec guys' topic, linked in my sig. It's about a dozen pages in, roughly.

eta in that topic I attempt a reinforcement and epoxy repair of the split plastic gear. That repair failed and I ultimately replaced the actuator with a new one. www.rockauto.com has them for <1/4 of the GM dealer Delco price.
W

That's a great Sub. I kind of wanted that body style with the 8.1 but I got a 2009 with the 6.0 because it had the 6 speed auto that downshifts with braking and the cruise control.
I'm not much of a mechanic but I do know car audio. I wouldn't mess with the crappy factory stereo. You can get an aftermarket stereo with an aux input and bluetooth for under $100. It will likely have a more sensitive tuner and sound better too. Crutchfield.com is where I buy just about anything electronic. Their customer service is better than you can imagine.
R

Are the cheap actuators from Rock Auto any good? Or get the AC Delco? I'll have a look at your thread to see what a nightmare it's going to be to change.

I was looking a Crutchfields website earlier today oddly enough.

The pumice stone really works on the carpet. It was pulling up dog hair that I didn't know was there!

You are going to love driving this thing, we have an 03 2500 with the 6.0 that we bought from the original owners 2.5 years ago with 126k miles on it. Only upgrades so far are the Airaid JR intake, upgraded ignition, and an older Hypertech programmer that we use mostly for transmission settings. Currently have a complete dual electric fan setup sitting in the garage that will go in along with a black bear tune at some point. For tires we just run 235/85r16's since it mostly just tows our boat and kids around, or sleep in the back when hunting. The exhaust on these rigs is actually pretty well designed from the factory and learned from my research that they actually will lose mid-range power with just a cat-back and/or shorty headers, long tube are a different story but expensive. The 8.1 has tons of power as it is, I would just do the Airaid JR intake and a tune and call it a day.
Last edited: Jul 1, 2019

Also, the trans filter is easy to change on these, definitely worth doing a drain and fill (not a flush) unless you have documentation showing it was done recently.
R

Not much to speak of lately, just been putting on some miles - going to the beach, camping, Costco runs (fold up the back seat and just keep pushing groceries in!). We may take it for a long drive to southern BC; not sure if we're going to fly, or drive. I like driving, but not as much with an infant and a toddler.

It did get it's new windshield. The hydroboost pressure lines are leaking, so I'll work that in sometime. I'll have to put in that Rock Auto order soon. It sounds like it has a cold exhaust leak too.

The "Service Ride Control" message came on today, so it looks like it's time to defeat the Autoride, and install some new shocks. What's do you guys recommend? A couple of you have suggested 5100s; what valving?

I just replaced my own temp blend door actuator. Only takes about 10mins. It sits at the bottom of the dash right at the top of the trans hump on the passenger foot well. (3) hex screws to removed the cover panel. (2) on the actuator and the electrical plug. One set of screws is 7mm, other is 7/32". You'll need a 1/4" ratchet and some short extensions to get to the panel screw over the hump. Very limited clearance there.
R

"The Bus" as we have now dubbed it has a belt chirp/squeak when it's wet or very humid out. I have it narrowed down to the AC belt/pulleys.

I found a set of towing mirrors on a local classified site. Turned out they are manual everything, but I bought they anyway. I think I'll put them on my Silverado - which has factory power mirrors w/ defrost, but it's pretty much only me who drives it, so it'll only be my annoyance. Are the aftermarket mirrors any good? I really dislike the telescoping mirrors the Yukon came with; they're terrible to back up with.

Winter is coming, so I really should find some floor liners, and get a remote start installed. She's coming due for another oil change, and I found out the previous owners had been using low grade Mobil 1, so I'll probably change back to that. It does not seem to be (significantly) affected by the oil consumption bug.
R

Rock auto order was placed on Sunday, and delivered on Wednesday, and that was with the cheapest shipping option!

New AC belt and tensioner done; easy! There's still a little belt noise though - I suspect it's the idler pulley.

The HVAC mode door actuator was quite the miserable little project, but it too is done and it even works now! It took a bit over an hour, but most of that was trying to contort myself in a way that I could both see what I was doing, and perform the task. I don't know the last time I had scratches and scrapes like this from working on a vehicle. It didn't take much for tools but it sure took some patience and perseverance. I opened up the old part and it looks to be intact. I believe it had been changed previously, as it had some goofy brand name on it, so maybe it was just an inferior part.

The hydroboost hoses can wait for another day. I'll have to order those shocks soon, too.

Just did a "shock upgrade" on mine. I have had good luck with bilstein shocks. Good customer service.