llamalander said:
Composite board will expand when it gets hot--in every direction, not just the width like wood. It is strong enough to buckle itself at butt joints, so you may want to get an idea of what it can do before attaching everything. Looks like your pieces might be small enough to fit in an oven, you might give it a measure then toss it in at 150º and see how much it grows...
Click to expand...

So, I have to contact the company. I won't waste anyone's time by posting the different literature from the company, but I do recall reading their stuff, where it says "virtually no thermal expansion or contraction." But, as I'm not a dummy, I don't think, "Virtually" is a useless word. I had planned on some space overall...but the installation instructions say 1/4 inch side gaps. I need to find out more as their tech specs page would not load. The company's name is Deckorator. I can do a quarter inch...but I'll have to do a bit more work underneath to hide the orange than I wanted to.

And of course, wood would have been no better...I think.

1/4" gap between boards is only 1/8" between yours and the track, which will probably look good and work well.
Decks are often installed with joist tape, a butyl-like protector for the supporting framing. If you don't feel like painting the gaps, you might consider running that under the tracks to hide the paint. It stands up to weather and wet and can take a beating.
It will be fun to see this installed--

I'm also thinking about that.

I'll take pics as I do: the old D-ring bolt holes have to be patched, and I'm going to use my old favorite, epoxy putty, to fill it in, then sand that down. I also have a seam (it's not in the pictures but it's there) where there are two panels that make up that rear bed. Imagine that...the small little bed that it has, and it's two body panels across. I may have to grind that down, but I'm not sure yet.

My tentative plan as of this second is to putty the holes (the stuff works like metal when cured...or use all metal, a different expoy-ish product) and then sand, and then sand the whole deal and paint with either the Chassis Saver or Rust Bullet that I have laying around for the frame. It's absolutely not rusty right now, but that stuff tends to wear very well. I'll have to see how it all sits and work carefully from the edges to the center.

I've been looking at this product a few different places, and it looks like the closest Home Depot has it. Never even heard of it before...but this should seal it all up well. Thank you once more for the great heads up here. This is why I post things here before I make mistakes.

I have lots of little upgrades I can post about, but what's most important is that it's now legal, and on the road! and...a little off the road, as you can see. Without any recovery gear, I didn't want to mess around too hard, and I heard some noises to address...but she's legal! 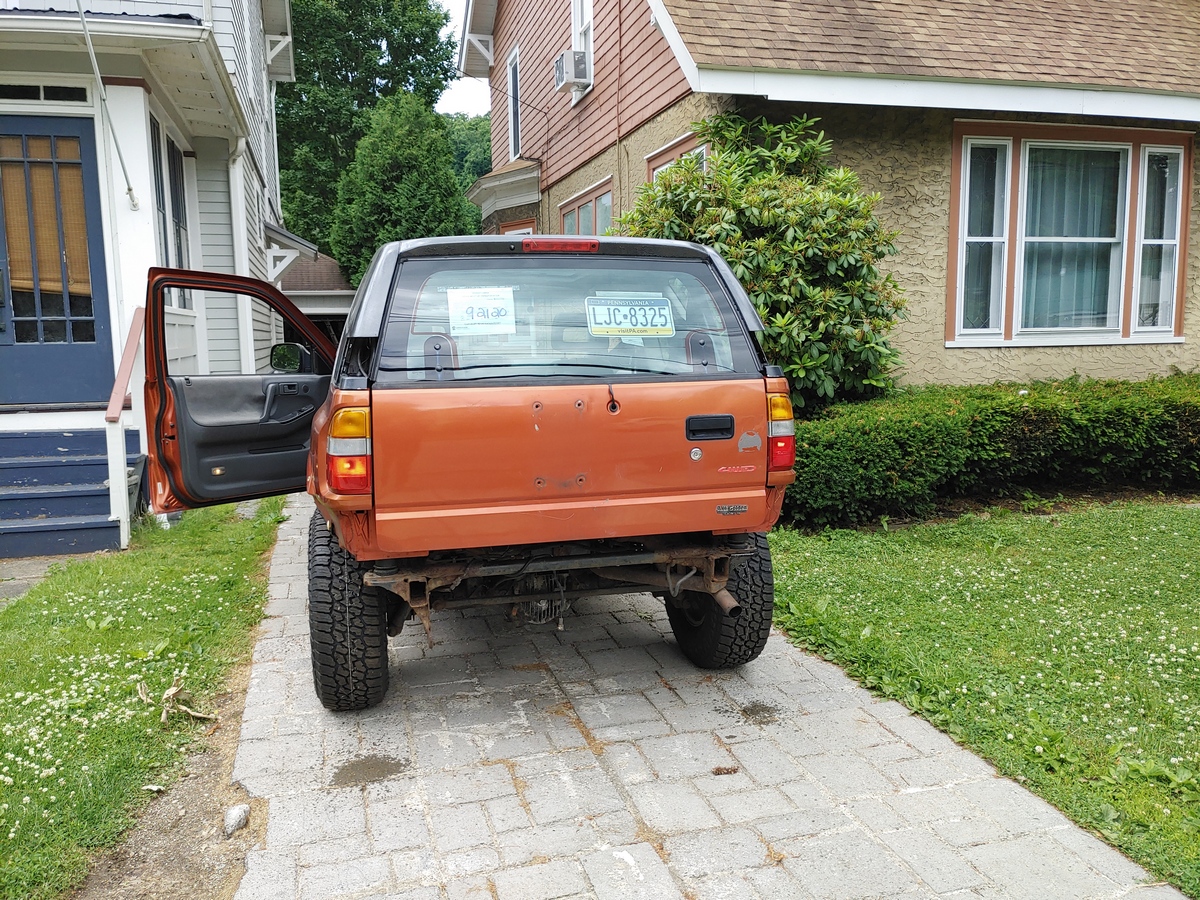 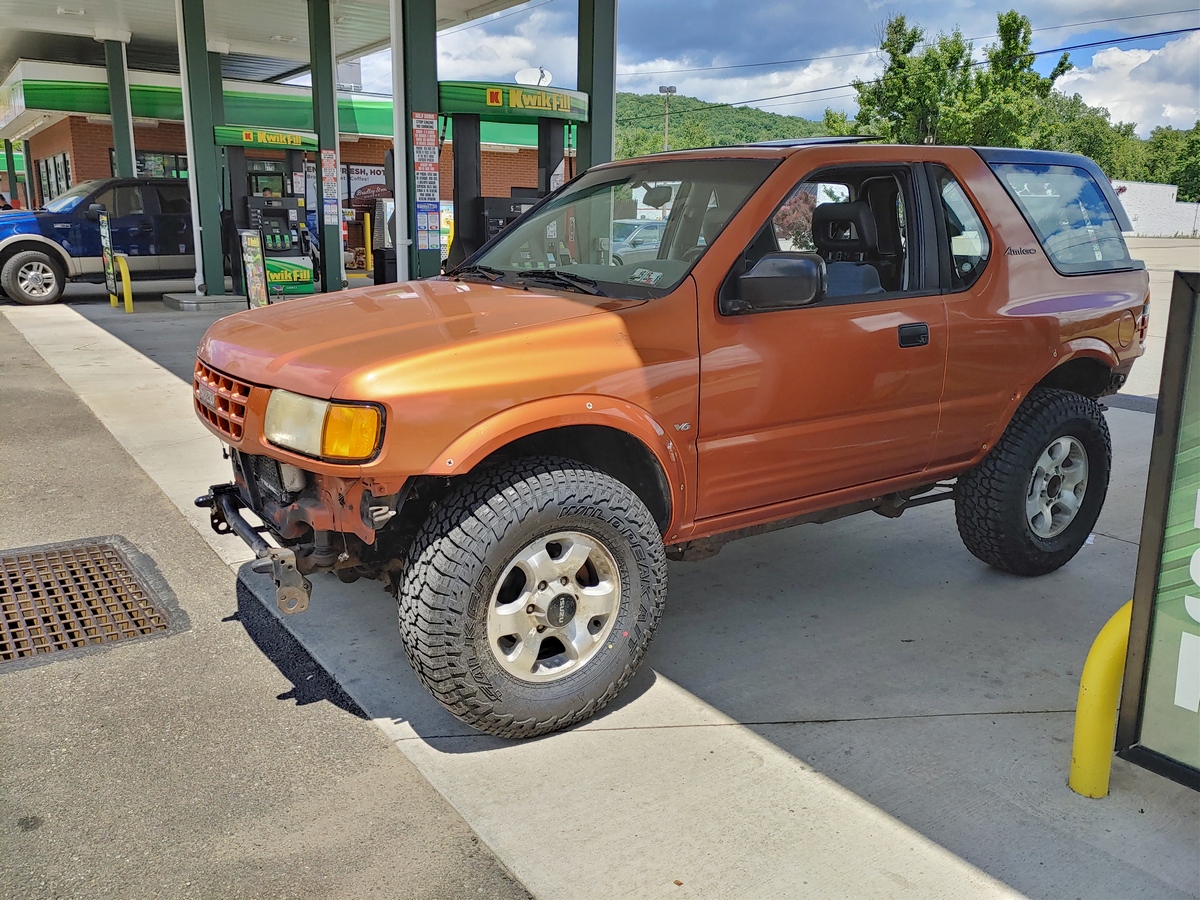 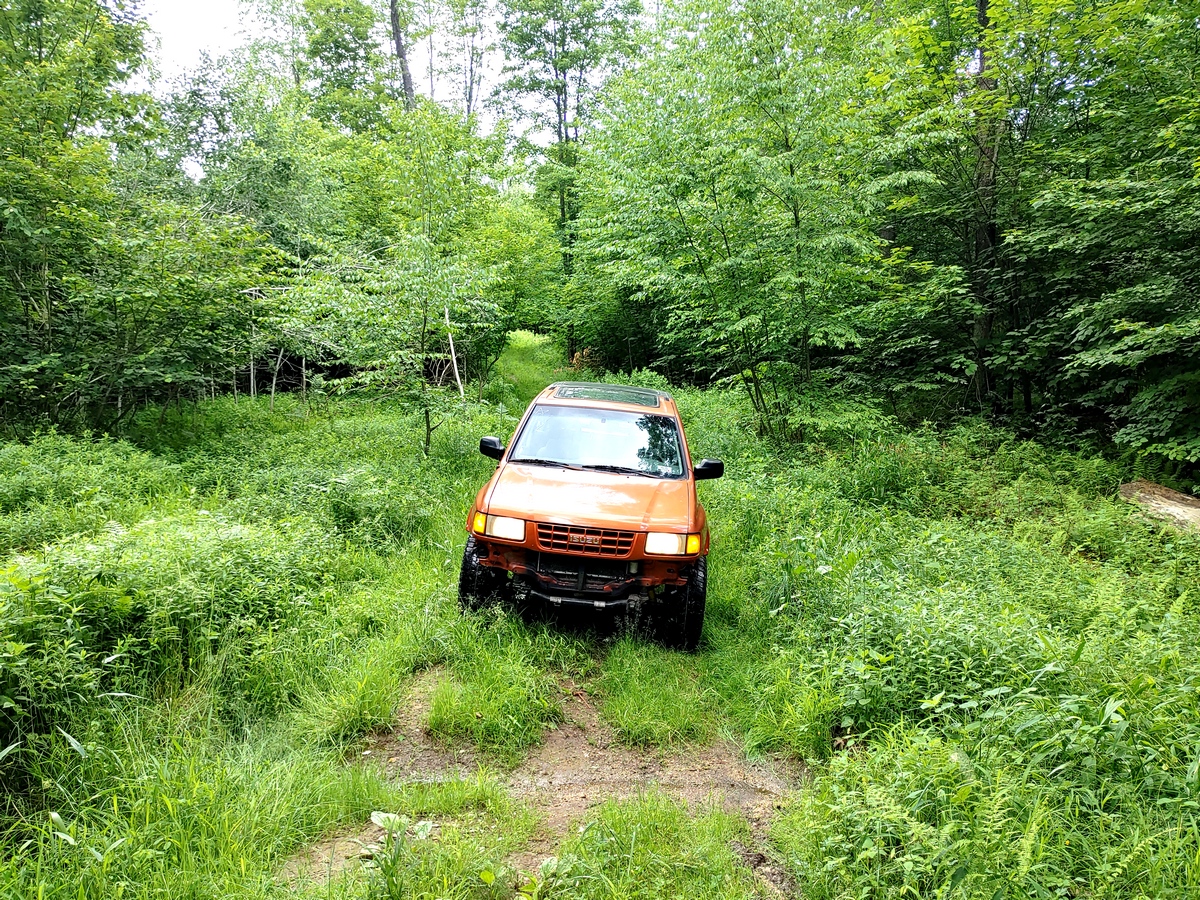 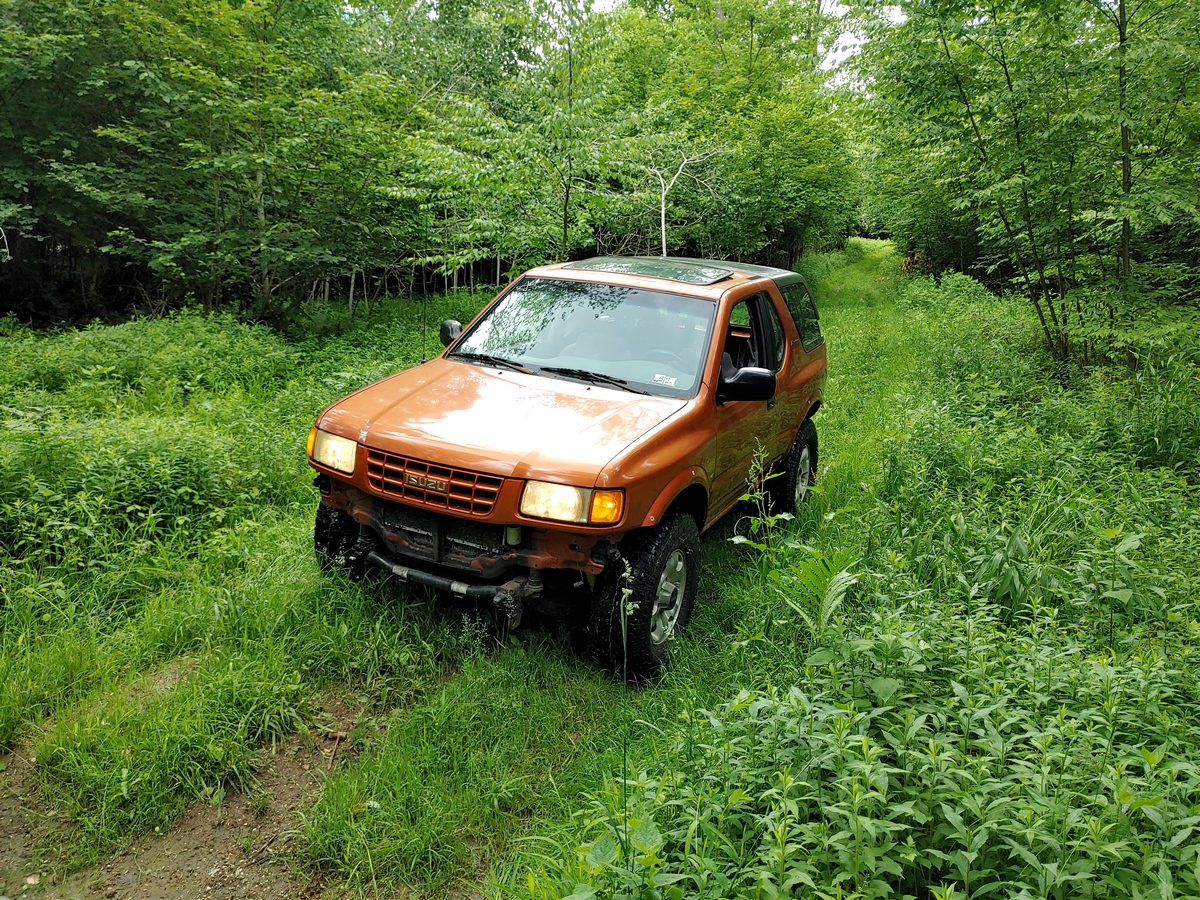 this little amigo is developing nicely!
your body lift looks real fine, and your rocky experience is showing in how you are approaching your other improvements.
and you are takin' her out!
i like your style!

rascott said:
this little amigo is developing nicely!
your body lift looks real fine, and your rocky experience is showing in how you are approaching your other improvements.
and you are takin' her out!
i like your style!
Click to expand...

Thank you. We have a bit of an issue right now with a T-bar, but it's on the way to being done. Between what I learned from my Rocky time and parts I have left over, it's all been a big help.

OK, so lots of pictures and updates and things coming this week: new coils and other stuff on for the lift, and the bumpers are on, too. Better pictures coming in better light!

Ok, so let's first talk about the bumpers. These came originally from my last rig, a Daihatsu Rocky. Loved that little rig, but the company did a ******** job engineering the engine, and you will always find them for sale with bad head gaskets or some related cooling issues. This is "a thing." I did not know about "this thing" when I bought it, and I even had the head done. Annnnnnnnnnnd the head still ate itself and died, taking the block with it, too. As related elsewhere here, I parted it out and got a lot of my money back.

But I kept my bumpers.

The bumpers themselves were pieced together with the amazing and extensive help from Myron at Zuk Offroad. They are essentially Tracker pieces (their Dominator bumper) with some Vitara bits thrown in. The Rocky had a similar width to the Amigo, so that was not a concern, but the Amigo's frame rails are much wider at the rear. So the front bumper needed some mods, but the back bumper needed to be extended at the center section, and the tails reinforced so that I could use a high lift jack on the corners if needed.

Additionally, I had Ballistic Fab clevis ends added at the front (there were none before) and at the rear, added a Rock Hard 4x4 fuel carrier to the side of the tire carrier for Rotopax, which will come later. The "old" skid plate at the front was awesome but did not fit, as it would cover the oil filter, so a much shorter skid plate was added. The tire carrier had a different way to close and secure which got rusty immediately, so I had an EMS Offroad latch put on, too.

I did not do the welding, because I am garbage at it. My local guy did it, and as his stuff has been "Accidentally" crash tested before, I trust him completely. 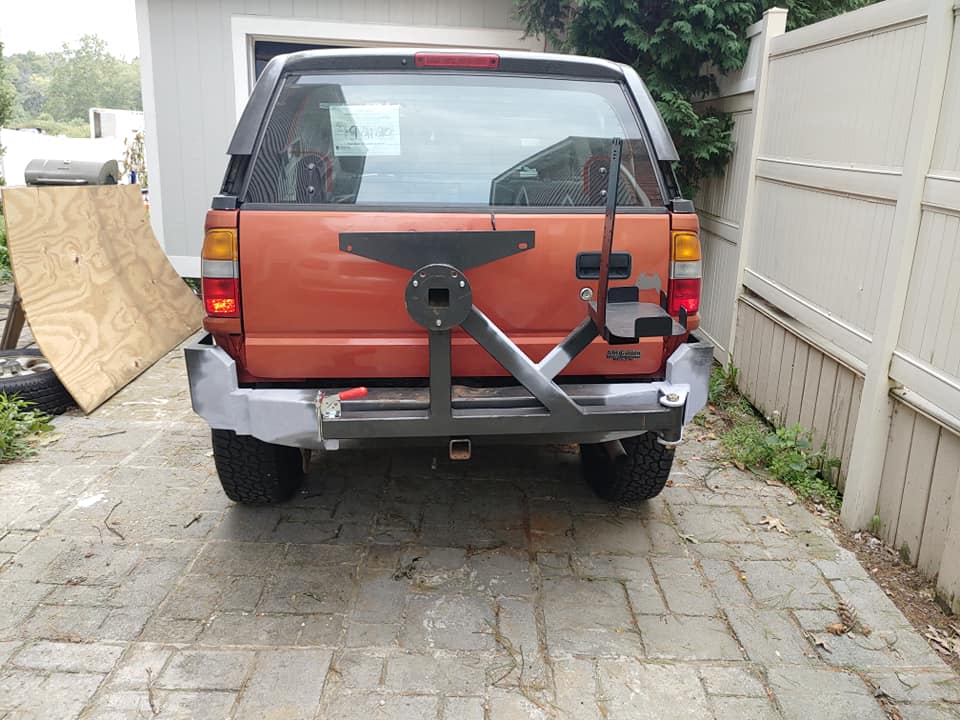 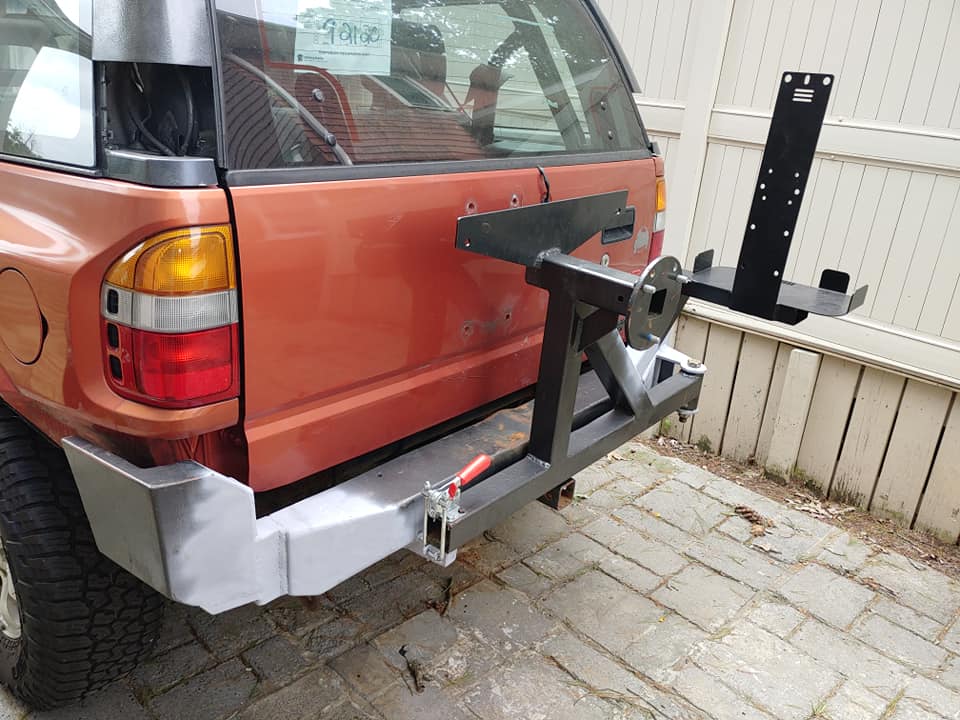 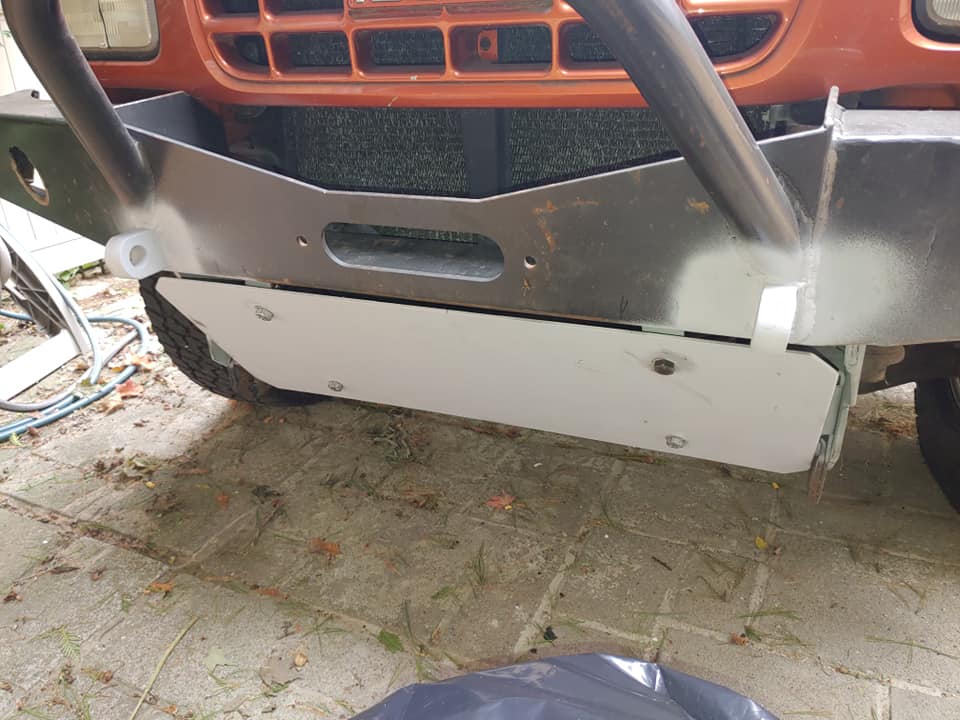 Been a little bit since I posted last. Lots has been done. Bumpers have been finished, and installed...along with the winch. I have to reinstall the skid plate in the front, but I have to play a bit more with the winch anyway. Also, the lift is on and done. I do think I need to crank the front t-bars down some for more travel (it's very stiff; not sure it it's the bars being too high or simply new, heavy-duty bars) but there isn't much droop.

With tires, body lift, and suspension lift...we are 5 inches higher than stock.

So, I went out and played once I got the winch on...and I needed it! I got stuck but was able to winch out with zero problems. Worked like a charm.

Front view, obviously. Grille needs to be finished, some more lights on, and so on...but good enough to go. 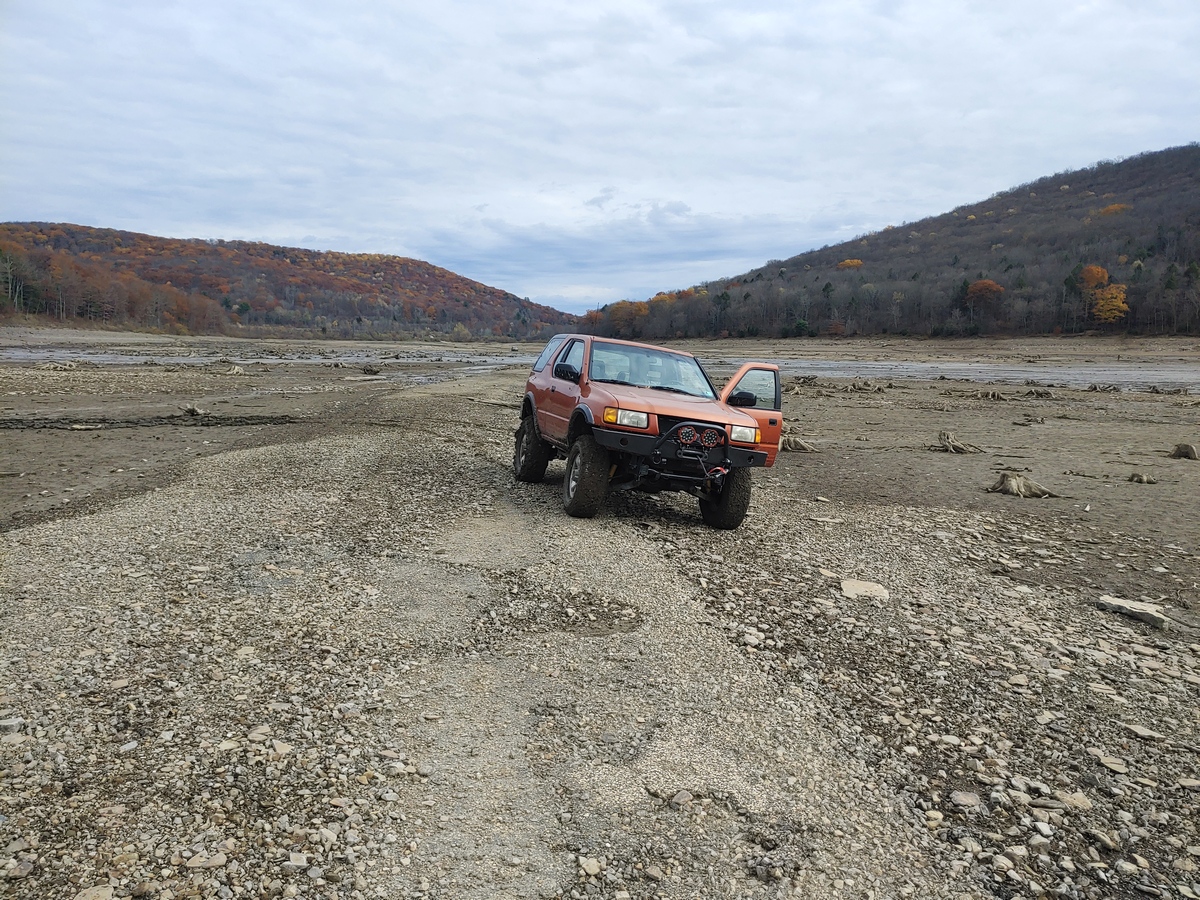 You may note some mud around the rear tire. I even aired down. I need some practice. 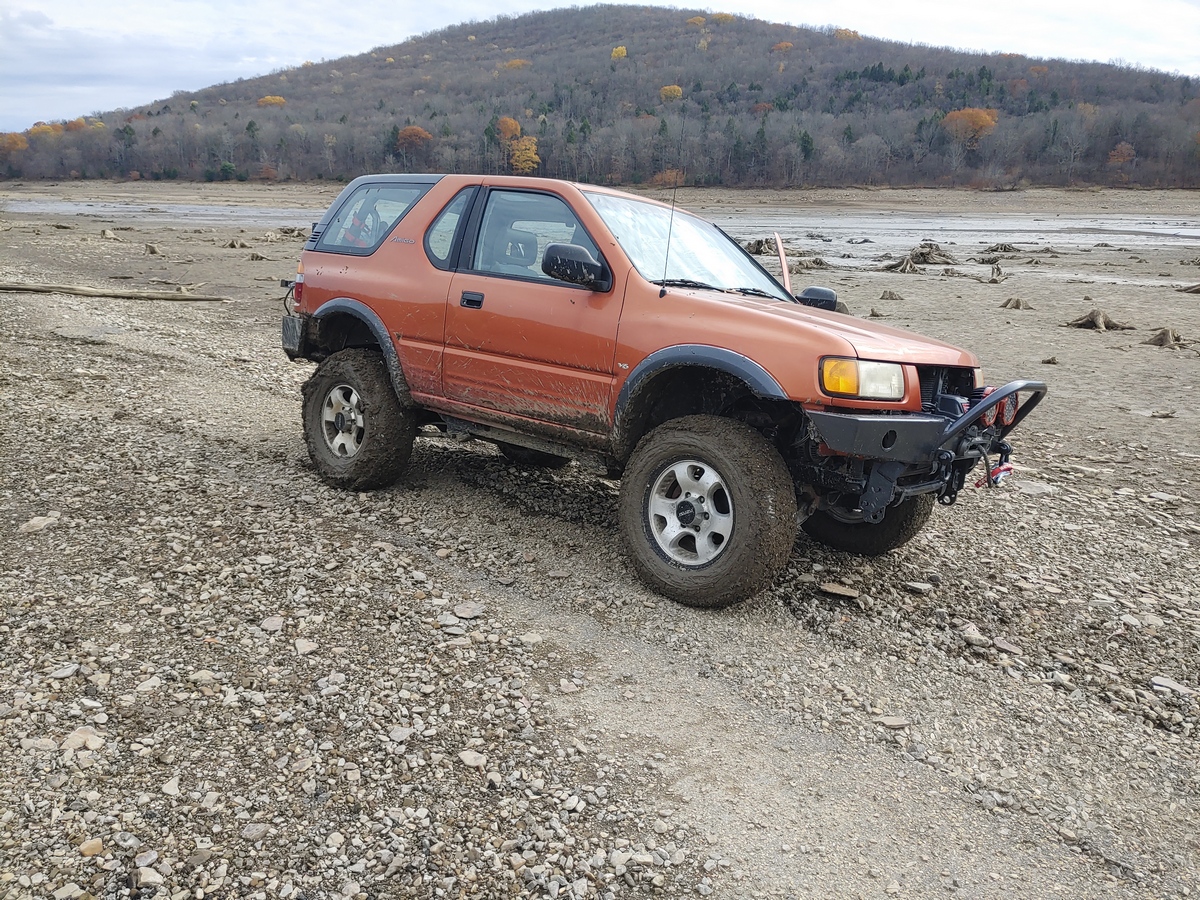 I need to finish the wiring on the rear light, but it was enough to get me inspected and legal. License plate light and brake work fine. 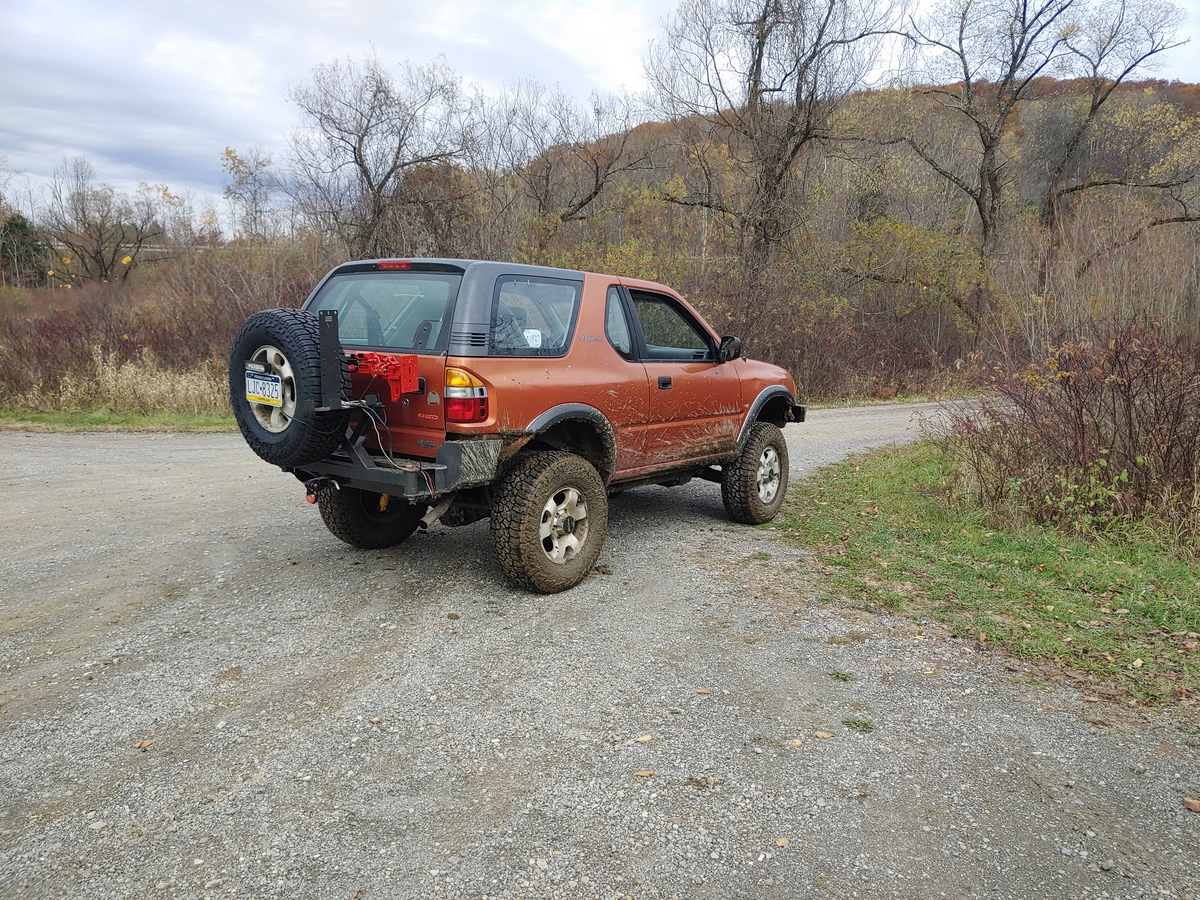 Out of the mud, and away we go. 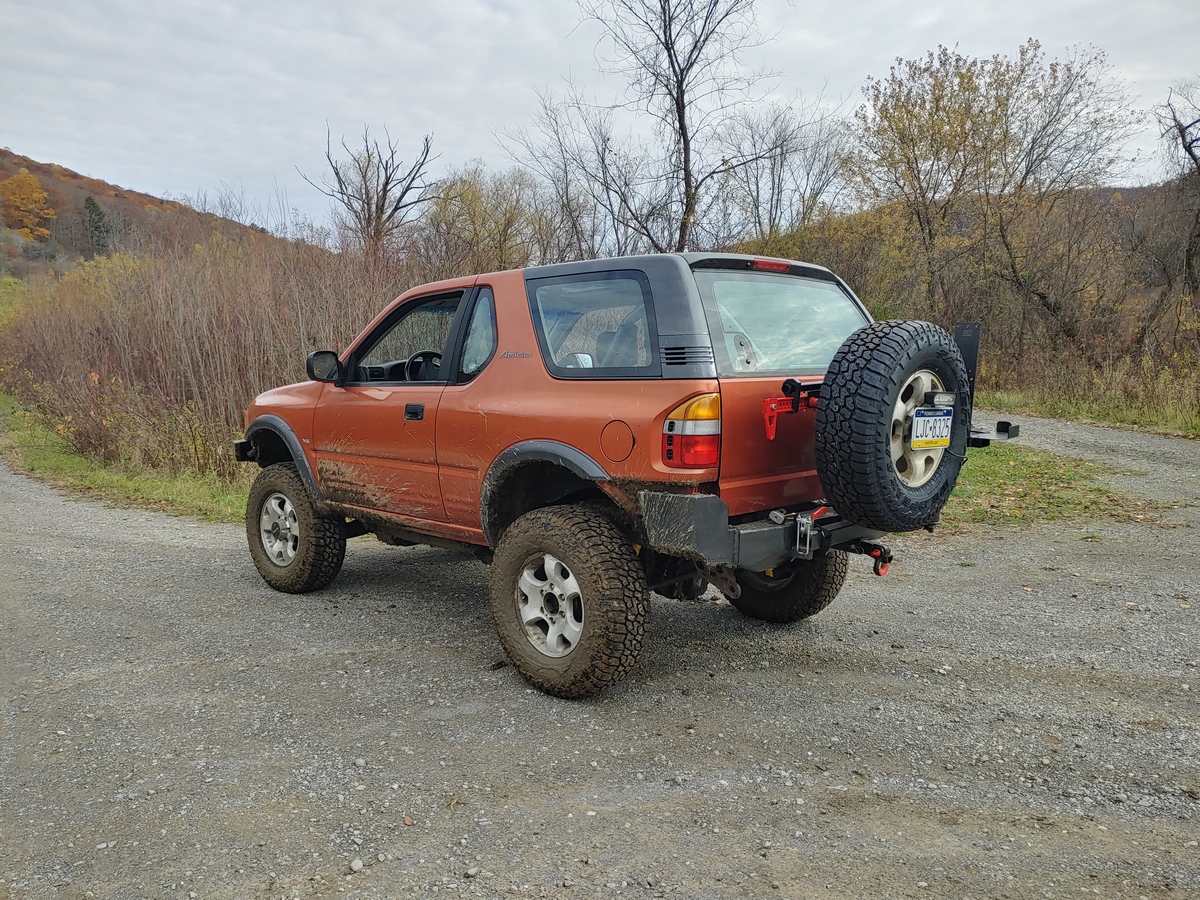 So, it's been some time since I updated. There's more to do as I slowly get it ready for the spring and summer fun. Here's the current update for how she looks: 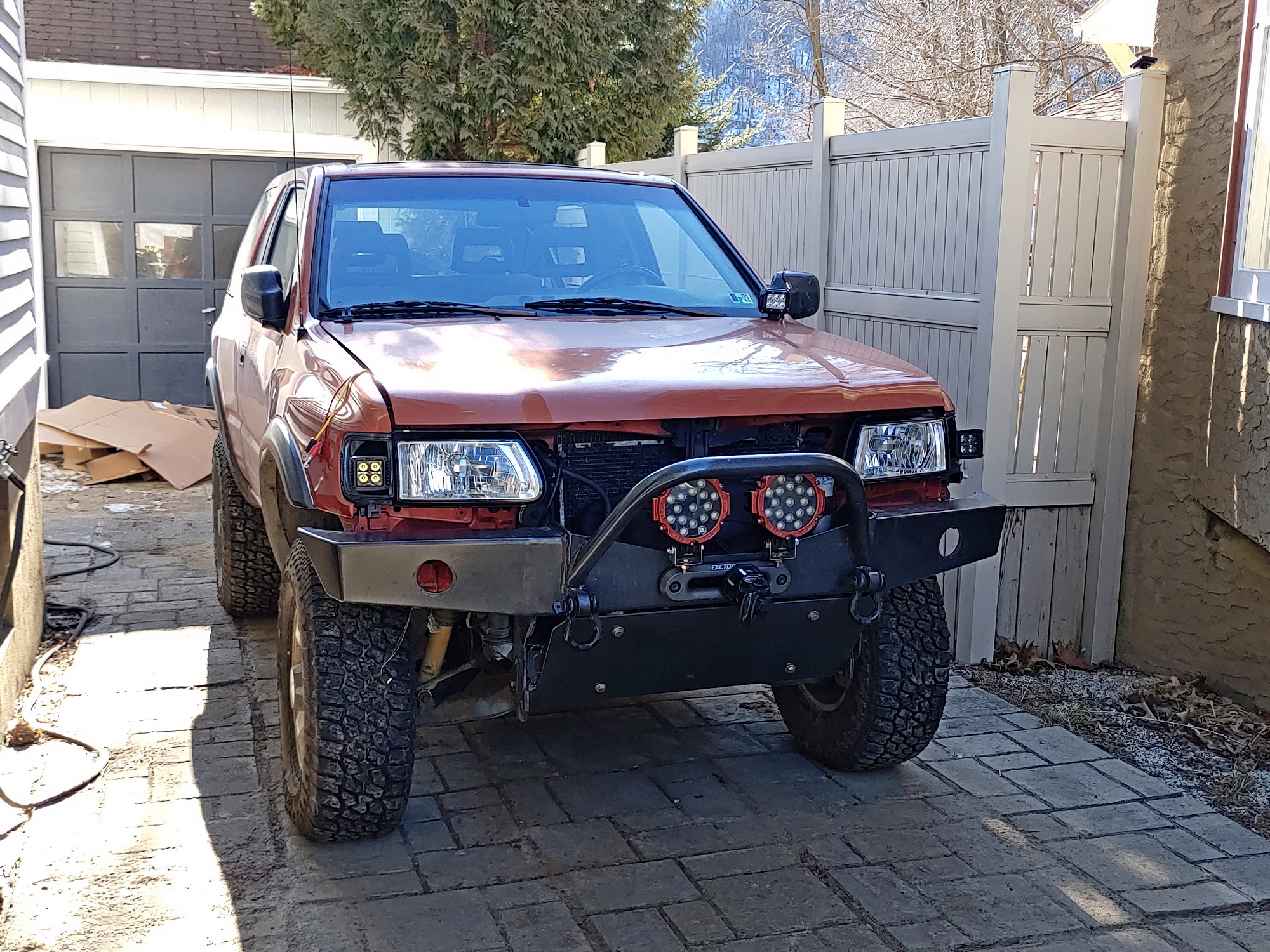 Sorting out the electrical has been a bit of a pain, especially as I got a new battery with dual terminals...only for it to last three days. I think I have it solved. Still dual terminals, which allows me to have the winch and stock lines (upgraded with thicker gauge last summer) up top, and the accessories on the front. Much cleaner and more organized.

Swapped out the old plastic headlights for the glass ones here, which took a lot of fooling around with...but they're done.

I removed the lenses for the side marker/turn signals and in their place put Rough Country LED pods with white DRLs. The turn signals will be relocated to the bumper using Xprite JK LEDs. Did you know that 3 inch lights to not fit in a 3 inch hole? Must be the new math...but that's slowed me some, too.

Also did some bolt removal as old stuff was rusted and some new stuff was Chinesium grade zero (seriously...I've never seen a bolt strip like that).

I also have a new grille to match the new lights, though I have to cut it to make room for the winch that you can make out there.

More update fun. Had more unsexy things done, like tranny fluid change, ditto for power steering fluid. Oil change, stuff like that. I have a steering wheel shake/shudder/clunk I am unhappy about and it's not fixed or resolved, so that's got to get done.

I am remiss in discussing the lighting stuff I've done; I can do another post later. The pods on the hood are in and done, and wired in. The big round ones on the bumper are still in and on. The DRLs from Rough Country continue to blow 30-amp fuses like it's their job, so that is a work in progress. I actually think it's the switch, but they are sending me a whole new kit for free, so I'll reserve judgement until the new lights come.

Since the last post, I have the new Odyssey AGM battery in and that's working fine. But not sexy! 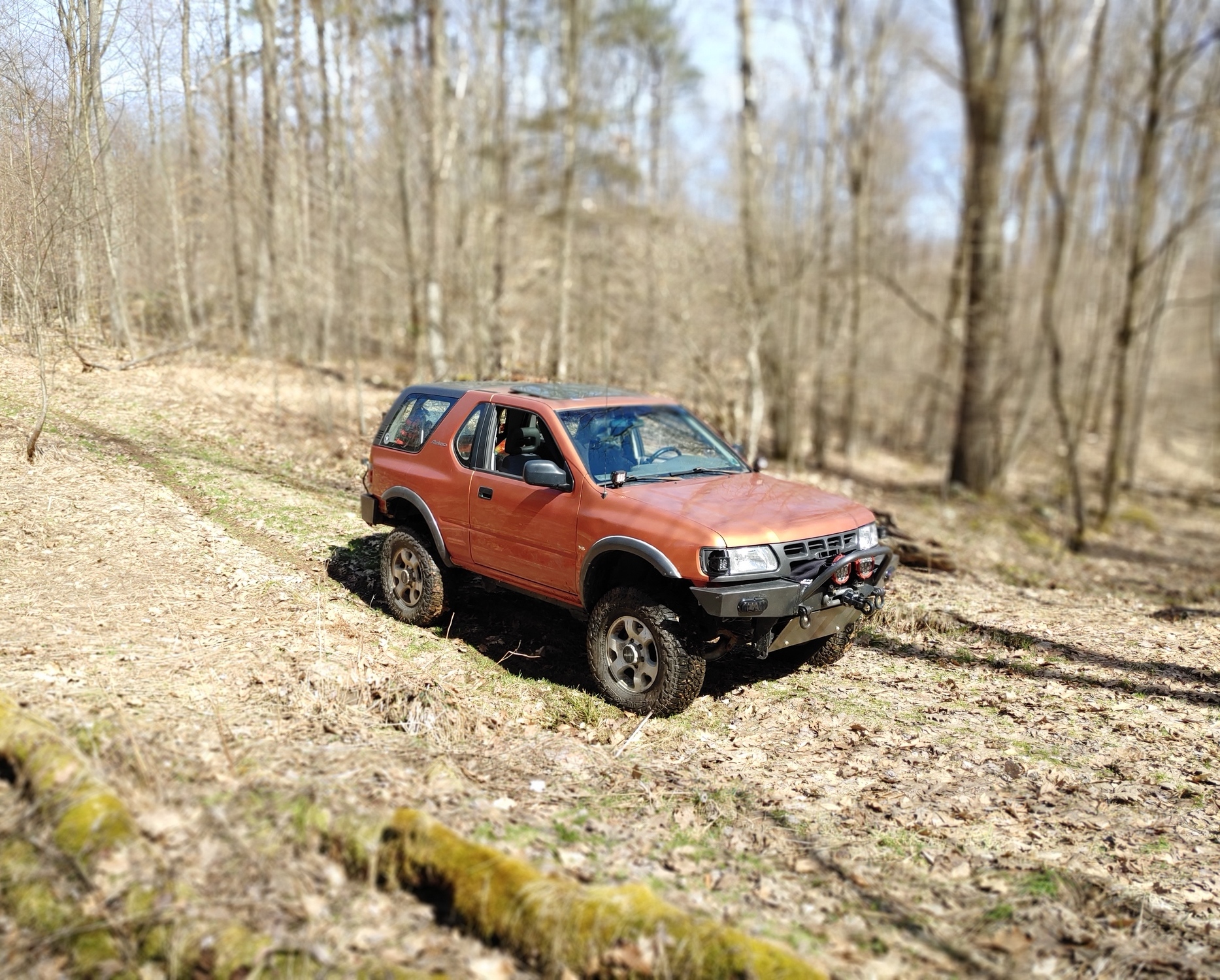 Just a quick pic where I was playing with settings. One more! 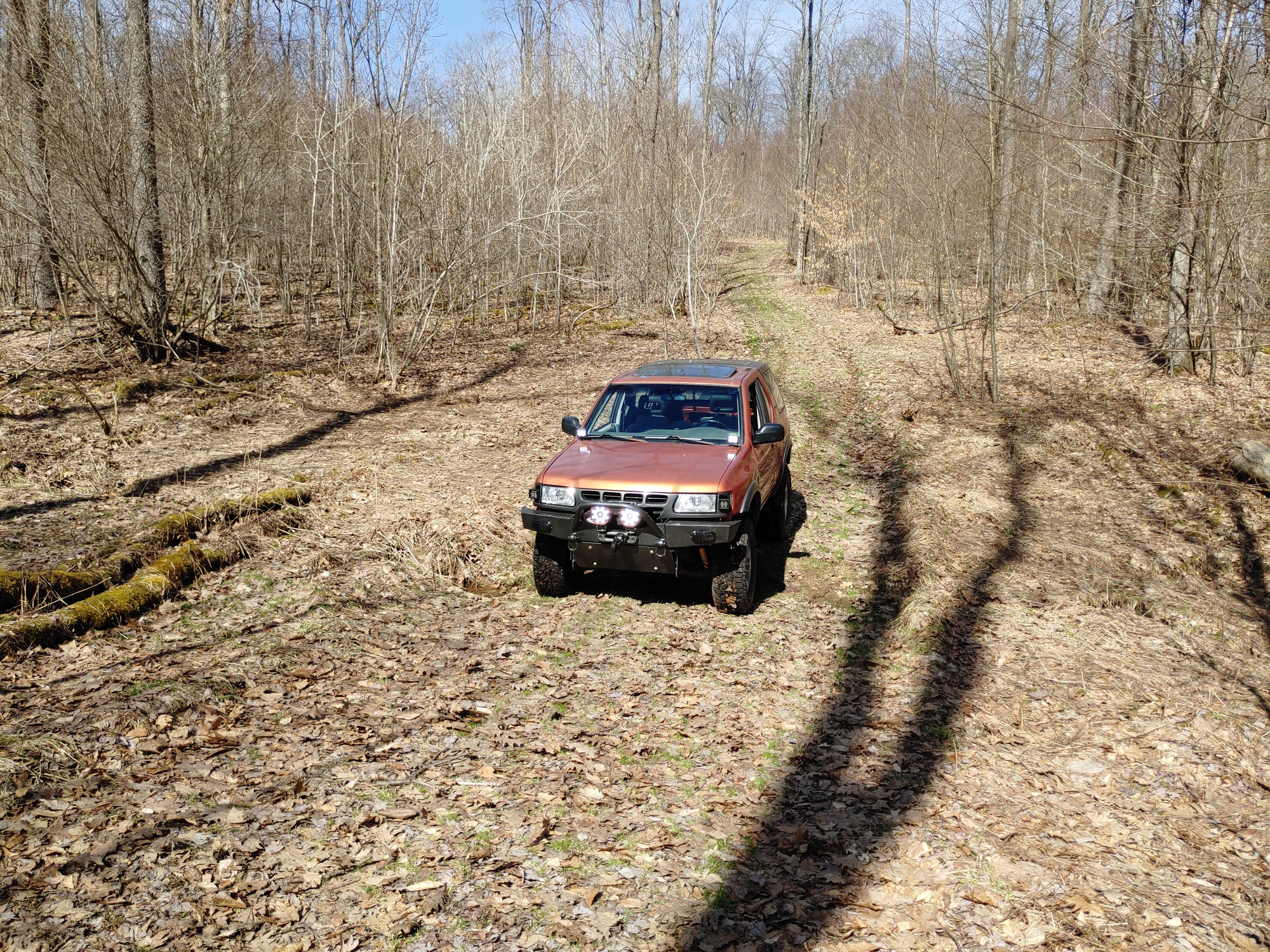 Of course, with unseasonable temps today, I wanted to get some things done. Aside from cleaning up and reorganizing stuff, I wanted to continue some rust abatement. The driver's side frame rail was crusty and needed attention. I also had to get rid of the last remnants of the side steps that needed to be cut off. Ready to start: 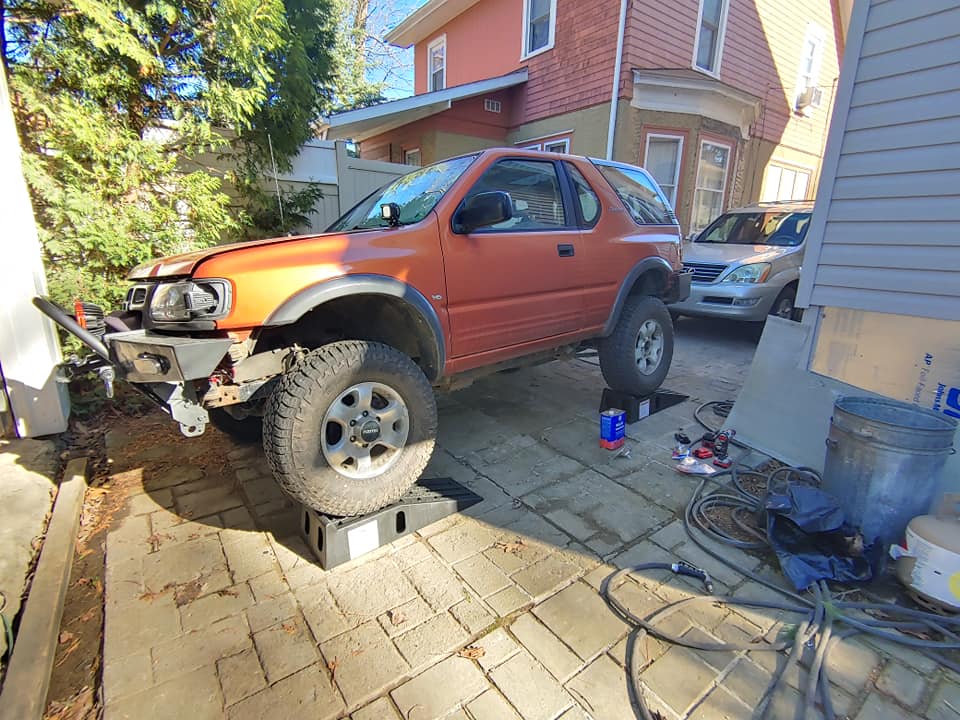 Here's what it looked like first, as I began: 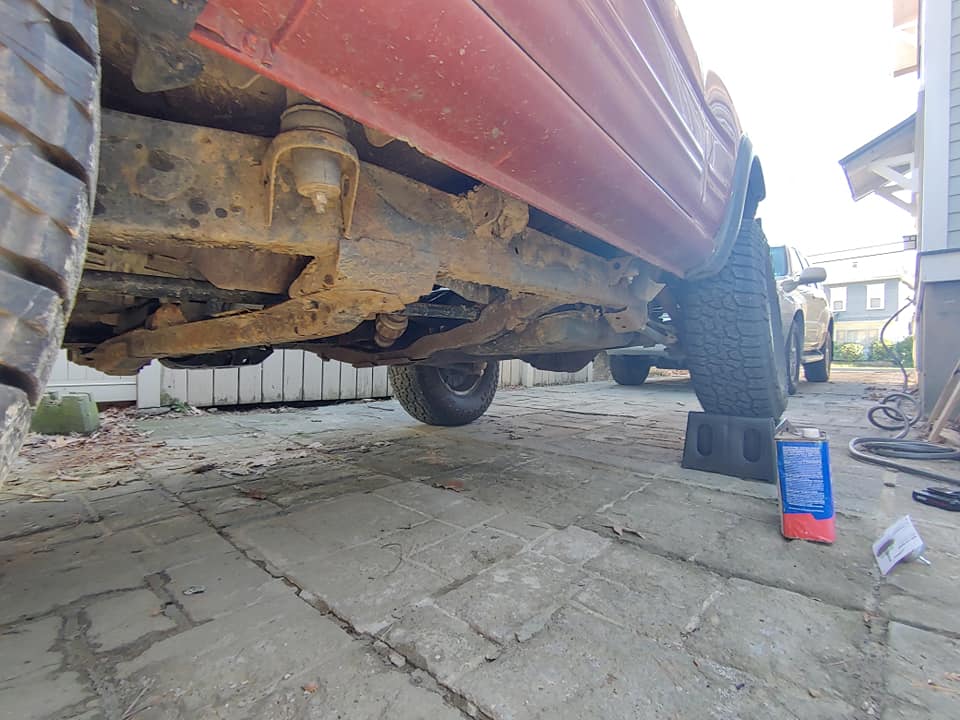 I used a wire wheel on a drill and also on a die grinder, as well as an angle grinder with a flap wheel and a grinding wheel. Then, I used M-E-K to clean the whole thing off. I used a mask and gloves the whole time because that stuff is nasty. Once done, I hit it first with Rust Bullet's gray product: 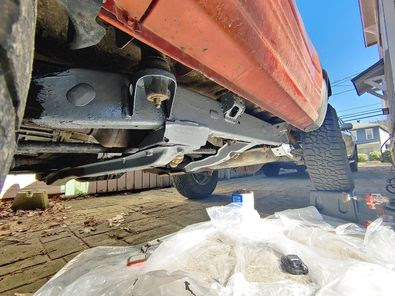 Let it dry, and then used Rust Bullet's Blackshell as a topcoat: 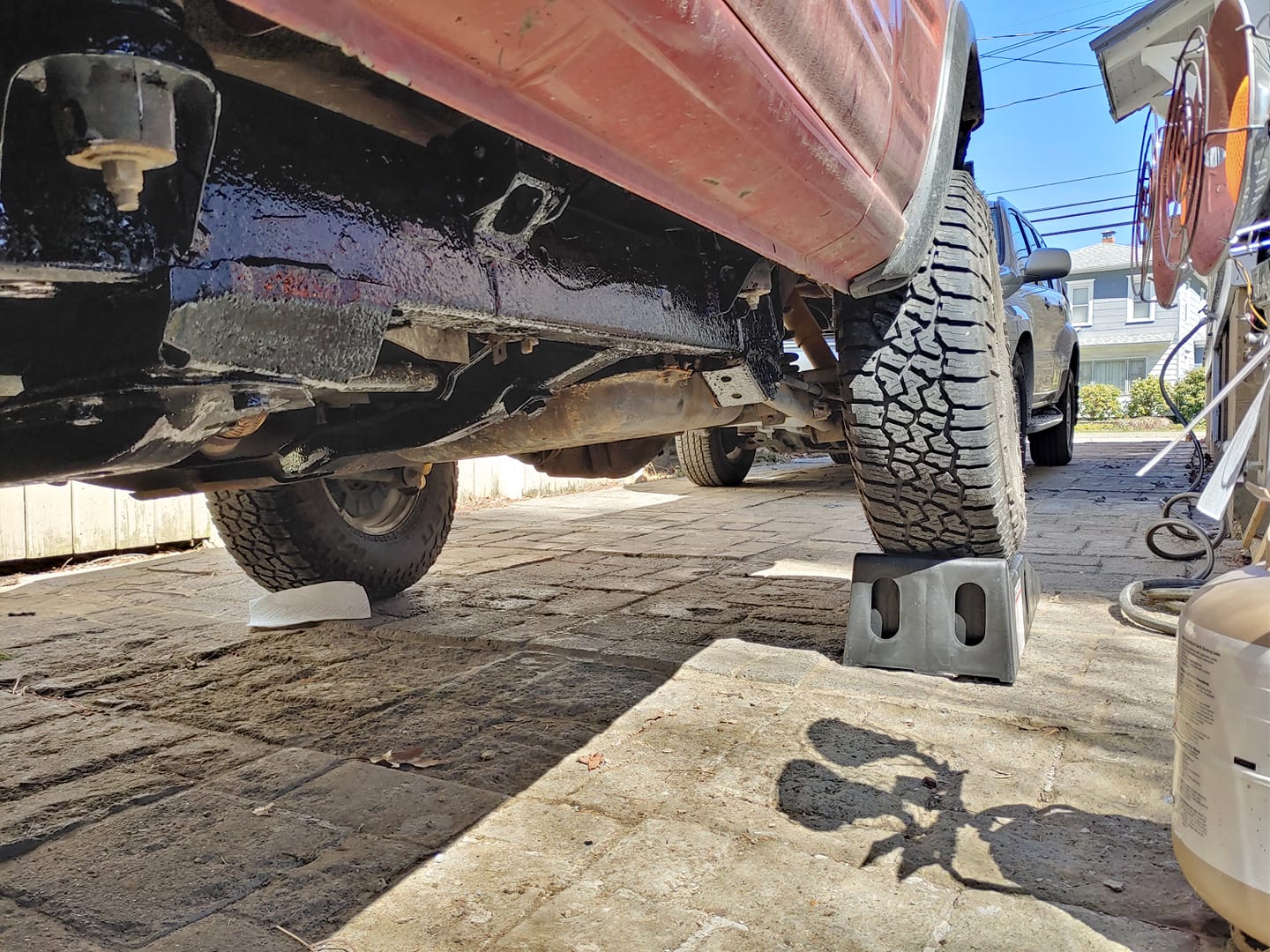 To get the rear frame, including rear crossmember, I have to get the wheels off. Next nice day!

utherjorge said:
Let it dry, and then used Rust Bullet's Blackshell as a topcoat:
Click to expand...

How does it compare to POR15?

I've used both. I like Rust Bullet...but just because I was using that first. Now, locally, I can get POR-15 and Chassis Saver, and I use them interchangeably.

Rust Bullet lays down really smooth, with no brush strokes.
B

Where in PA are you located? Nice build I am in SE PA but will keep a look out for it on the road!