1995 Montero LS 5-speed. Last year of the cool dash with the grab handle in the US. This truck has been my weekend camping and touring rig. I do not off road this truck, though I do take it down dirt roads with a dirt bike on the hitch. I built this truck to blend in while being comfortable and reliable. No flashy bumpers or wheels, I left the surface rust on the chrome bumper, No big tires. Just suspension work and maintenance items. I've taken this on multiple 1000+ mile road trips and it cruises no problem through the desert highways with the cruise control at 85 and the AC blasting. AC and heat work perfectly. I've never had any over heating trouble even in the Mojave at 115+ in stop and go traffic. The interior is as nice as it gets for this age. The exterior is nice from 10ft away, but does have some pin stripes and sap residue. Surface rust on frame, but otherwise completely solid. I've done most of the work on this truck and have not run into a single seized bolt. Passed smog with flying colors a couple months ago and will have no problem passing again if need be. (I think smog is good for 90 days?). Pre-Purchase Inspection just completed by Oceanside Motorsports. They noted that the truck is in exceptional condition with a few minor problems which are noted below.

-The engine is the 24 valve 3.0 6g72 which has significantly more power than the previous 12 valve version.
-Transmission: V5MT1-6. The V5MT1-(2,3,4,6) was used in tons of applications and is known to be extremely reliable. The syncros were problematic in the V5MT1-3 which was used in the 92-94 Monteros with the 12 valve engine, but the V5MT1-6 that was put in the 95-96 Monteros with the 24 valve motor has upgraded cone style syncros that eliminate the previous years' issues. Bottom line, you want the V5MT1-6 from the later years. This truck shifts like butter in and out of all gears.
-4.636 gearing from the factory. This truck has super select with the center locking diff. Everything works flawlessly.
-Open front and rear diffs. I do have a donor truck at my house with the rear locker and 4.636 gearing, so for a few hundred extra bucks, I could be convinced to help you swap in the rear axle and all necessary components. I've personally never been stuck or felt the need to have the locker, this truck is so capable as is.


Pros:
-New motor and OEM clutch at 190k
-Complete timing belt service at 244k (timing belt, tensioner, water pump, all associated seals, etc.) Truck has a few hundred miles on it since then.
-New upper and lower ball joints
-New front wheel bearings within last 5k. One started making noise so I had them both done.
-Both new CV axles. The stock CV axles both had torn boots, so I replaced with aftermarket. The stock CVs in these are known to be much stronger, so I kept them thinking I'd re-boot them when these aftermarket break, but the aftermarket are still going strong.
-4 New 265/75r16 Firestone Destination AT2 tires on 4 x 16" Montero Sport wheels. The spare wheel is the stock 15". I also have the stock 15" allow wheels to make the full matching set of 5 stock wheels with old tires. If you'd like to take the old tires and stock wheels instead of the new tires and bigger wheels, I'll take $500 off the asking price.
-Third row seating included and in great shape just like the rest of the seats.
-Bilstein 4600 shocks have maybe a few thousand miles on them. I also have the 5200s, but I like the control of the 4600s more. Though off road, the 5200s are way more comfortable. Your choice.
-I have the plastic trim for the driver seat, I just removed it to try and fit a bouncy seat from a gen 1. The bouncy seat did not fit.

Cons:
- Power locks don't work. I haven't looked into this, I just click the locks down manually. The power lock buttons just do nothing, no noise or anything.
- front diff and transfer case output shaft are leaking fluid. Not enough to drip or lose fluid level, but you can see what looks like oil seepage.
- few small dents and scratches which you'd expect from a 26 year old camping/exploring rig
- Tape residue on driver side rear passenger door from when the window was taped up. I have since replaced the mechanism and the window works perfectly now, but I haven't gotten around to removing all the tape residue.
- 5 chips in windshield. I had the safelite guy out to fill them in, but he said they'v already been filled. The chips have been there since I got the truck in 2018 and haven't expanded at all. All the glass is OEM Mitsubishi.

Great looking montero. Good luck with your sale. I too have a manual transmission gen 2 (94 LS) but I just don't think I could ever part with it. Does anyone know how many Gen 2 montero's came to the states with the manual transmission? I haven't seen too many. This seems to be a rare rig

I've been looking for numbers, but I can't seem to find anything. Definitely not many out there, and a great rig. I get compliments everywhere I go!
S 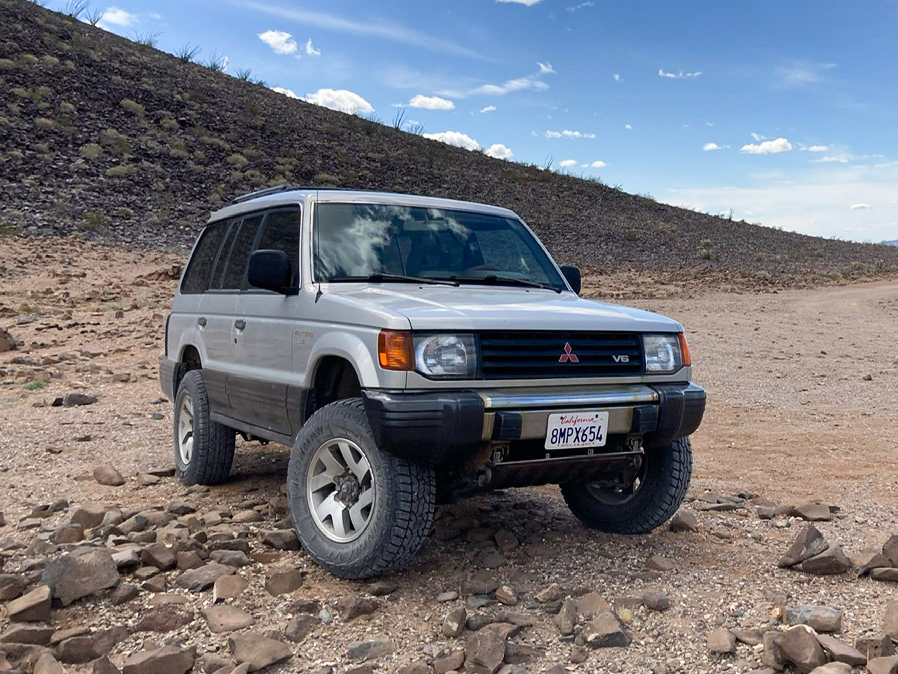