The work driven move to Japan afforded the chance to start a new build so I'm moving out of just the Rover forum and figured I'd start a thread here.

The subject is a 1994 Suzuki Jimny (aka Samurai in the US), in this case with a 1.3l turbocharged engine, automatic transmission, and as you can see is a hard top. Picture below shows the day she showed up from mainland Japan and we brought her back from the port. Overall in better condition than we expected given the age, but still...it's a 1994.

After getting it registered/titled/etc the process to determine what needed to be done, and what should be done, began. First thing out of the gate we did the usual maintenance to baseline. This included having the transmission serviced before she was shipped. Oil change, filters, etc all done too. The first real order of business modification wise was the suspension given that the leafs were likely the original. This turned into a chance to do tires too.

For the lift we tapped into the JDM scene and got Motor-Farm 2.5" leafs. Shocks were a mixed bag given availability, I ended up just throwing Rancho 9000's on the front and OME on the back. Not sold on that setup yet, but it was a better ride than what we started with so that's success. The tires are Yokohama Geolander MTs in 185/85/16 (so an aggressive 29", which is just hilarious but it all looks right and keeps the automatic transmission capable of moving the truck). Got lucky and scored a set of Ray's wheels off a newer Jimny being scrapped. The end result:

Now it's time to fix the interior up, since there is a rat's nest of wiring associated with the decrepit radio and such. All told it's a perfect truck for running around Okinawa since the streets are small and the speeds are slow. The back does well holding gear (this was a pic on hand from throwing in some of our rock climbing gear before heading north).

Long term intent is to take her back to WV for eventual duty around there as a de facto street legal side by side. Yes, the license plate is actually 666....no we didn't ask for that. The wife was horrified, the Marines thought it was hilarious, the chaplain just shook his head and I find it an ironic tribute to what is basically the same level of technology as a Series Rover (albeit with A/C).

Which engine is it?

The bonnet scoop makes me think it's got a Kei-Class engine in it (that and the lack of flares)....

Love the Sammies! Look forward to the build.

Paddler Ed said:
Which engine is it?

The bonnet scoop makes me think it's got a Kei-Class engine in it (that and the lack of flares)....
Click to expand...

My love for the Suzuki jimny started with a Samurai. They are becoming rare overhere and I seem them less and less. Still want to own a white convertible version one day!

The K6A is a 3 cyl., ~660cc engine, so about half the size of the 1.3L we got in the U.S., but with the turbo the power is about the same. Great little engine that Suzuki used in most of their vehicles back then. It was also a drivetrain option for the Caterham Seven.

expeditionhoneymoon said:
My love for the Suzuki jimny started with a Samurai. They are becoming rare overhere and I seem them less and less. Still want to own a white convertible version one day!
Click to expand...

stevec said:
The K6A is a 3 cyl., ~660cc engine, so about half the size of the 1.3L we got in the U.S., but with the turbo the power is about the same. Great little engine that Suzuki used in most of their vehicles back then. It was also a drivetrain option for the Caterham Seven.

So roping these together; I'd actually like to get a clean JA12, i.e. the coil sprung with the F6A as I'd heard locally that the K6A was a bit more troublesome...not sure if I'm going to have room in the stable here though, too many amazing vehicles and too little time.

The tires really are a great size, I may get a set to ship back as they weren't that expensive and it would be nice to have more.
Last edited: Oct 27, 2020

Starting to address the interior a bit. Removed an old non-functional radio and stared at the rat’s nest of wiring associated with it.

Decided that is for another day, but did clean it all up a bit, put on a RAM mount, blue sea USB outlet in the 12v space...and added the OE altimeter/inclinometer just for the hilarity of it. 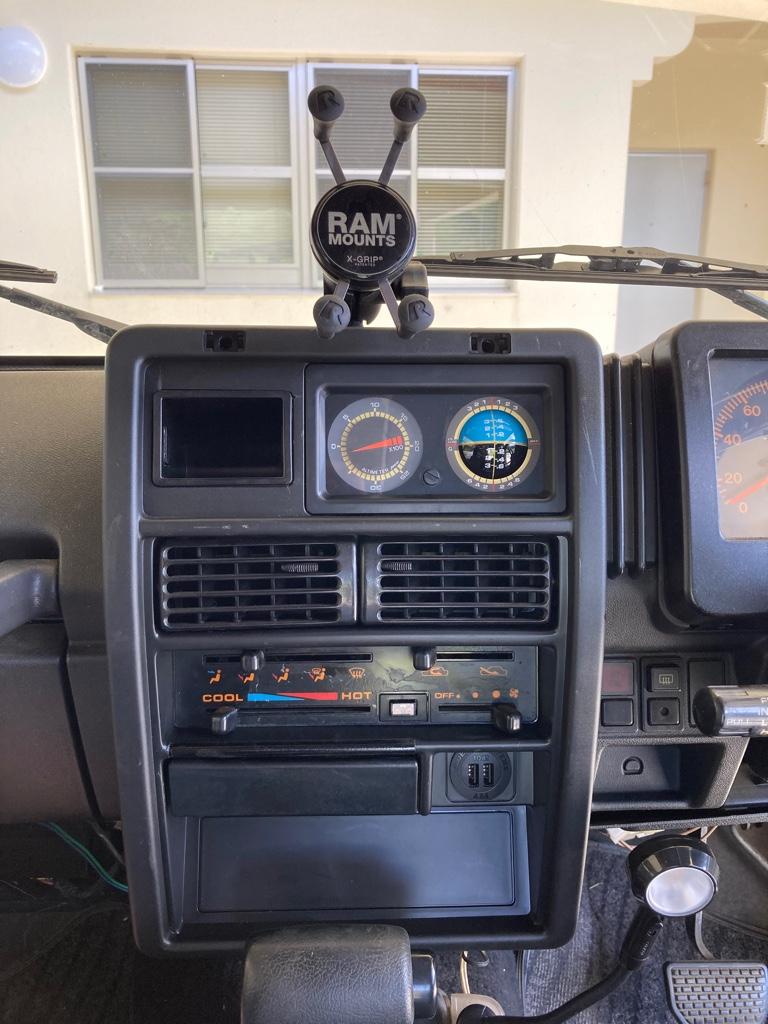 Where did you find the inclinometer? I'd love to have one of those for my Zuks!!

Riptide said:
Where did you find the inclinometer? I'd love to have one of those for my Zuks!!
Click to expand...

So you can find them on ebay but they aren't cheap. I used Amazon Japan and got it for $150 less when you take into account the shipping from the ebay link. Was it worth it? I don't know...I figure its a slow rolling resto of sorts, it makes it unique if nothing else. Especially given the intent to bring it back to the US.

2" spacer got the spare back on the back door. 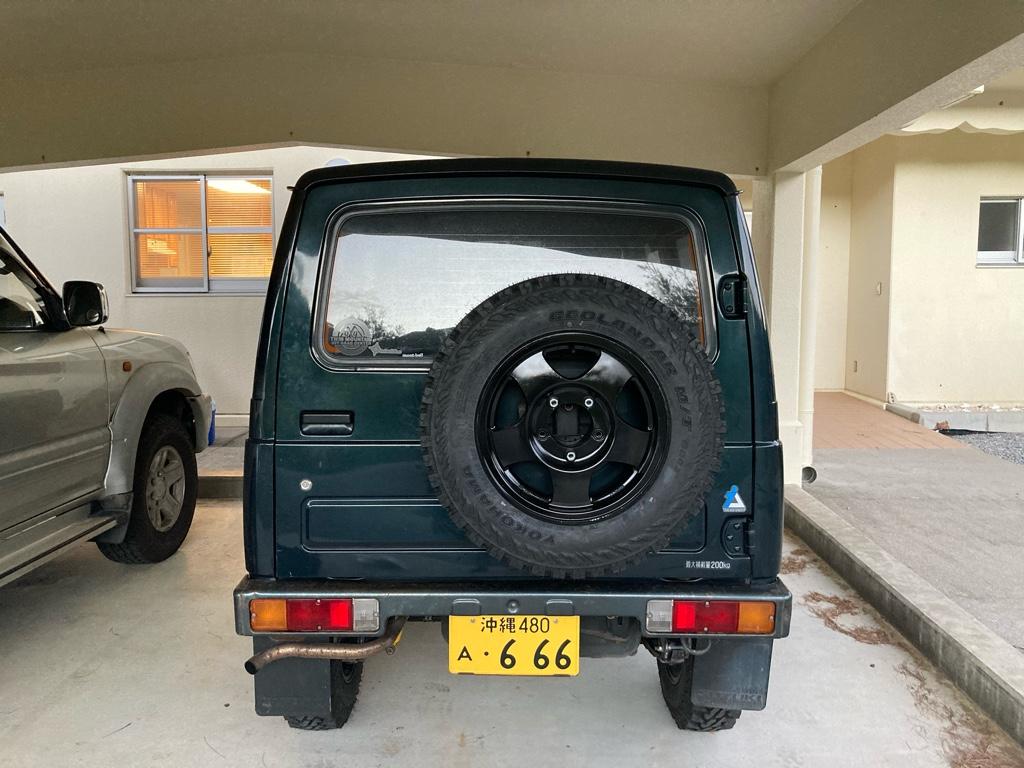 Truck serving duty as the beach runabout (gotta love Nov in Okinawa), ate up the chairs, cooler, inflatable SUP and the floatie. 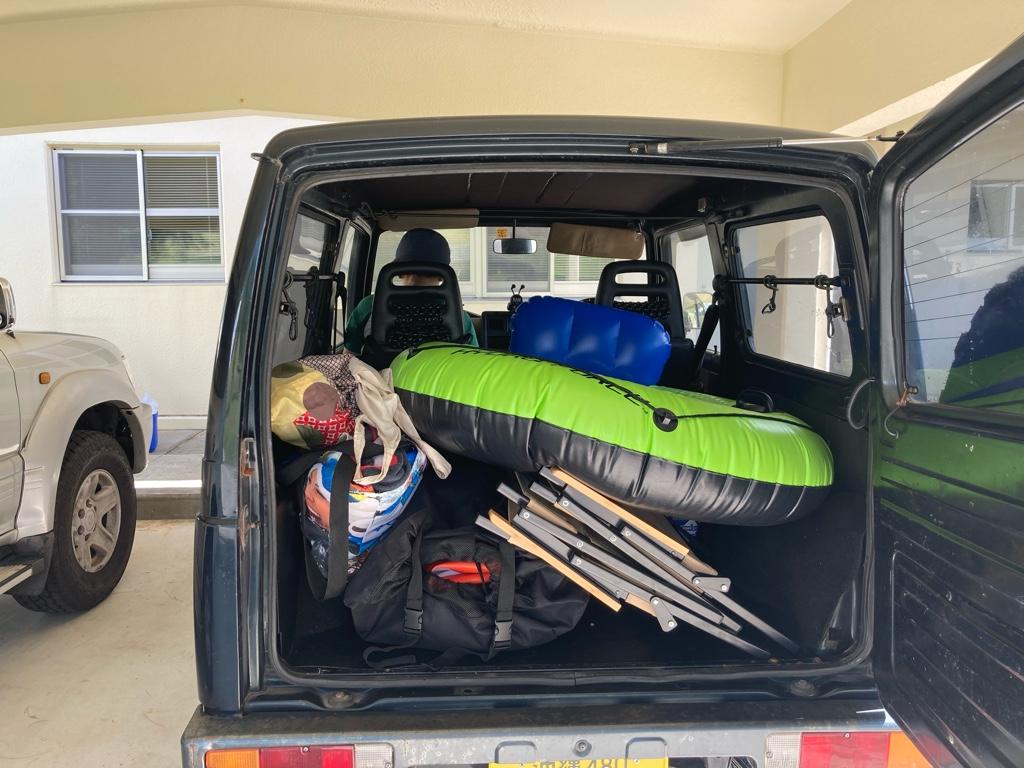 Next up...platform rack and more interior.

Paddler Ed said:
Which engine is it?

The bonnet scoop makes me think it's got a Kei-Class engine in it (that and the lack of flares)....
Click to expand...

As I recall from these sold in Hawaii in the early ‘80s, the “flares“ came with the widened U.S. spec Samurais.

Gotta love mail arriving. Some Low Range Off-road stuff showed up; not cheap to get the OE floor rubber floor mats but they work far better than the carpet mats. 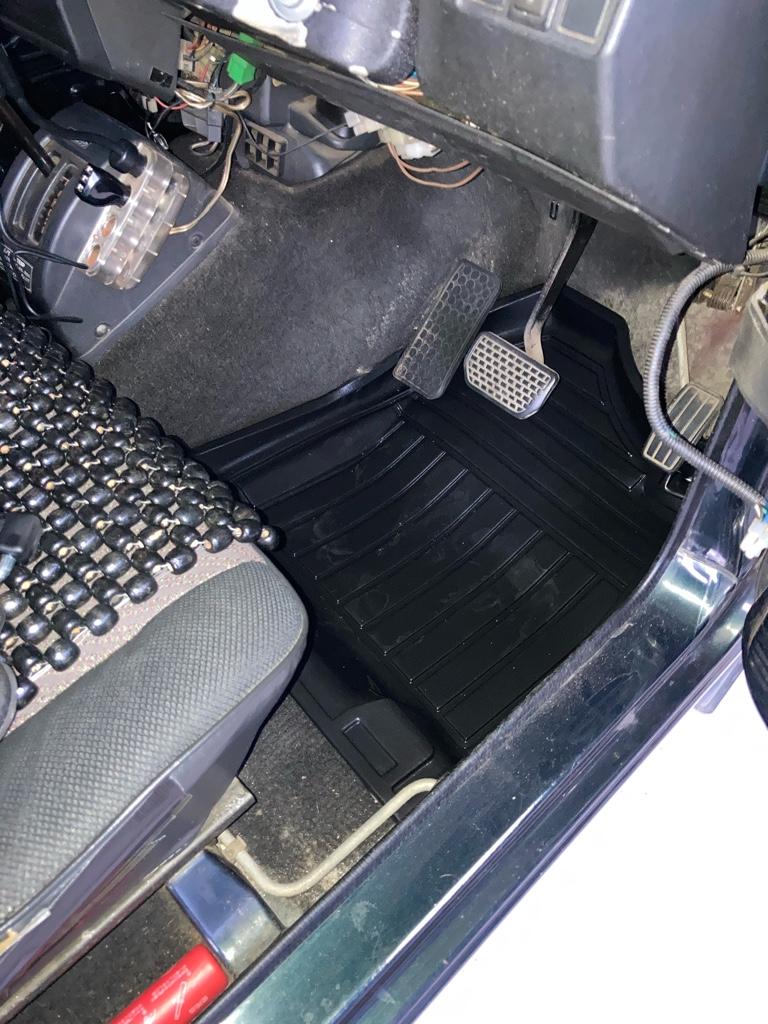 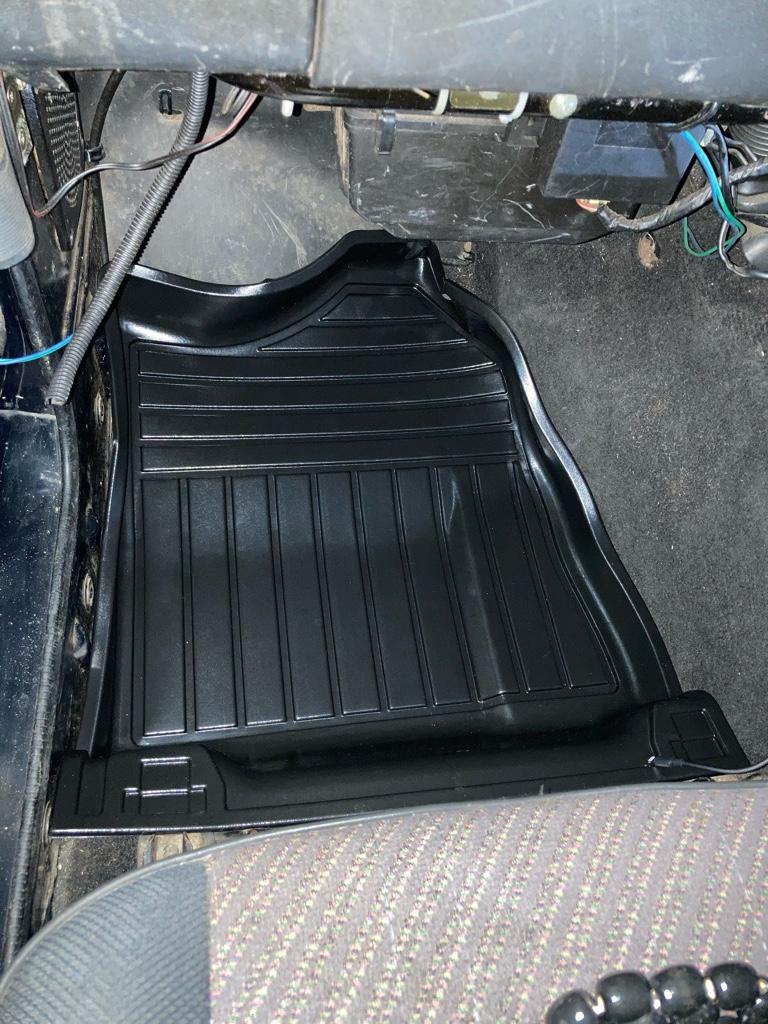 The replacement sun visors were also a small, inexpensive and welcome upgrade. Right is new (black) vs the old (tan...ish) 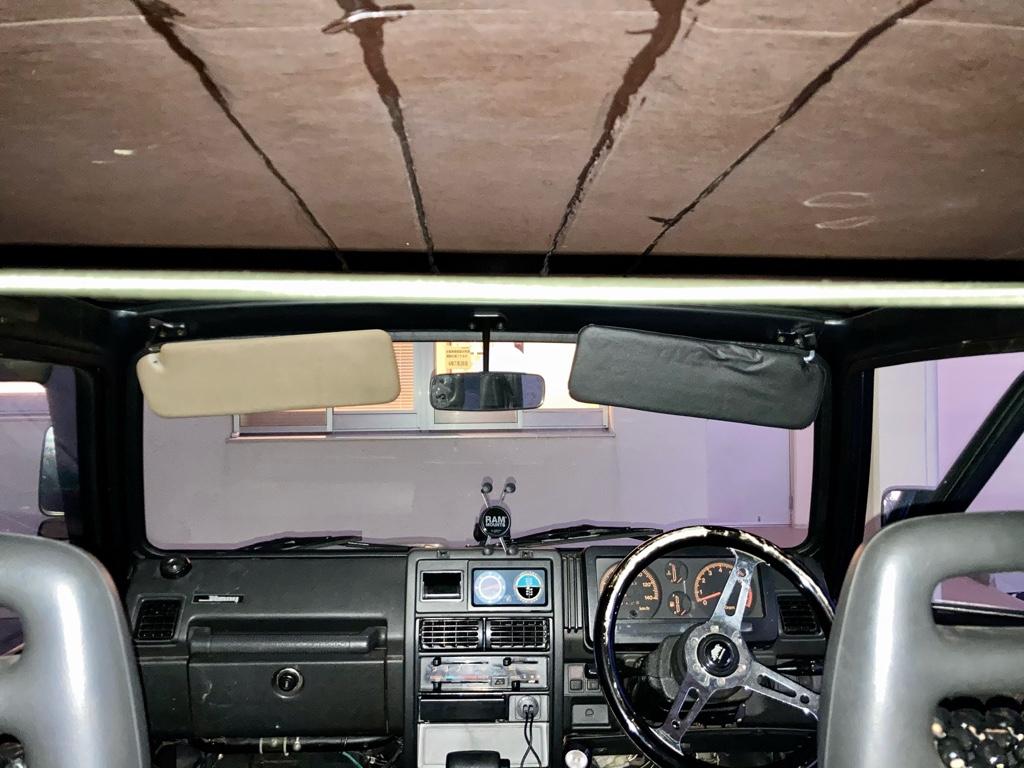 To illustrate the age and sun impact, here’s the old visors but opposite sides. 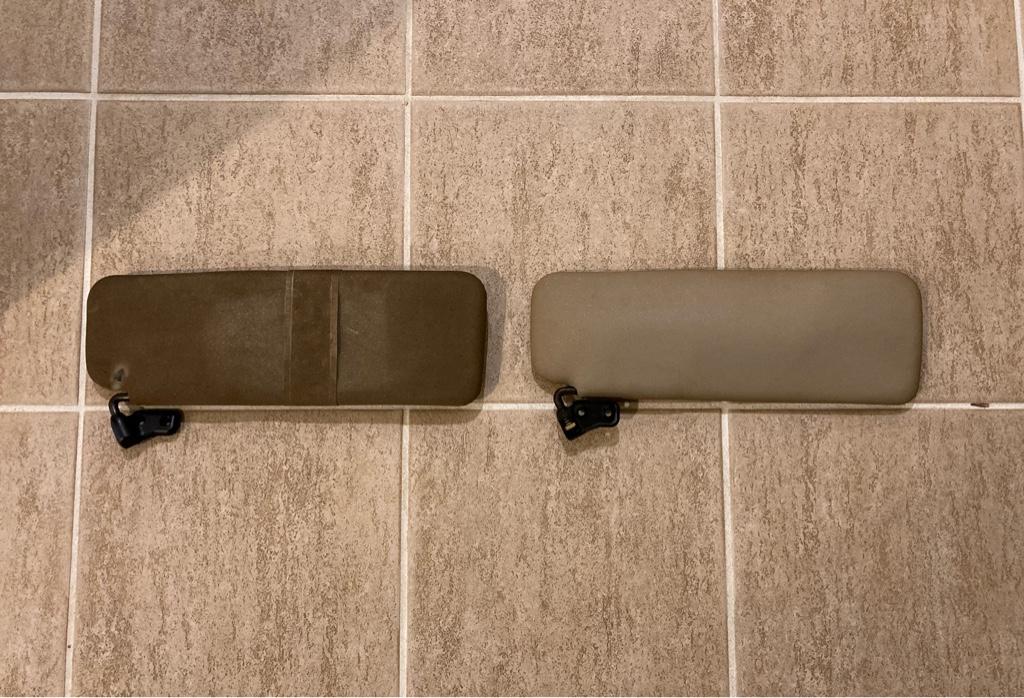 Platform rack is on but haven’t gotten a good daylight shot. Still pretty happy with it. 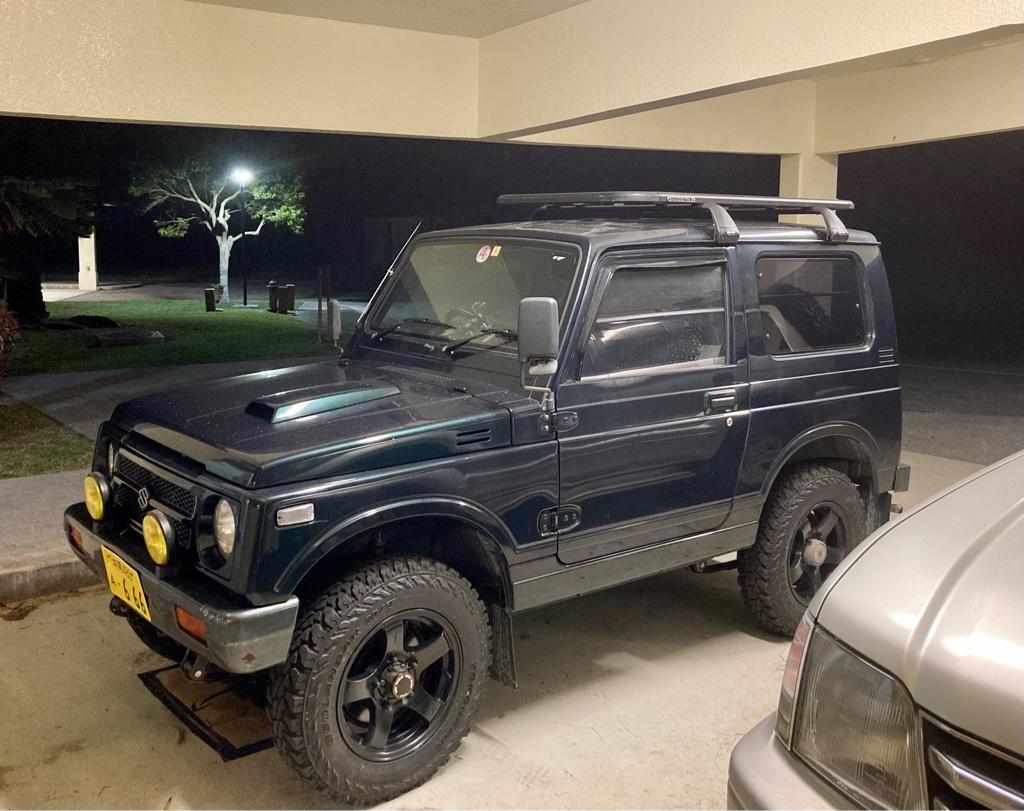 Took some time over the weekend to play with onboard tool kit options. When we moved to Oki I basically threw a bunch of my excess tools (I am a Rover owner after all) in a peli and figured need would dictate. With the other vehicle being a Toyota Prado that is a grocery getter/DD it doesn’t need many tools so the adequate but sub optimized peli has been living in the Jimny. 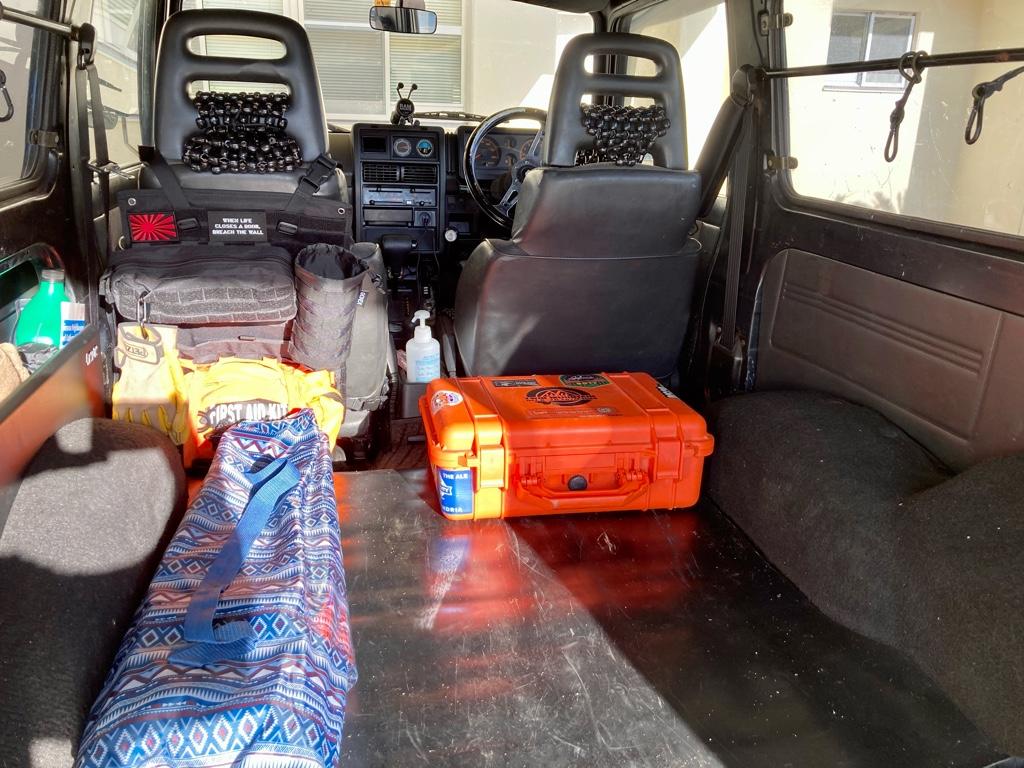 I wanted to maximize the very limited space, and decided to give Step22’s Pangolin tool roll a try https://step22gear.com/products/pangolin-tool-roll.

Initial impression was very positive, it is well made and thought through. 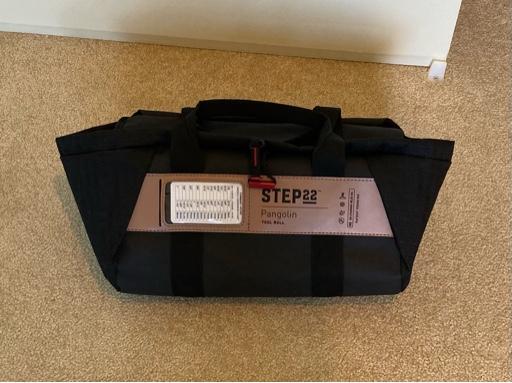 So I pulled the peli and set out to put into the Pangolin what I know I’d used while working on the truck thus far. The rule I tend to follow with onboard tool kits is if I do something to the truck that I can reasonably expect to do in the wild, it-or a suitable substitute-should stay with the truck. This is phase 1 of that since I haven’t had to do much and thus evolution is just starting. I know for a fact I’m missing some tools that the Rover own in me has come to favor. Absurdly large flathead screwdriver, for example. Hammers. The usual. I also have a better socket set, along with organizing rails, since right now it’s a mixture of 1/4 SK and 3/8 Craftsman. That said, this thing swallows up a fair amount of tools well. 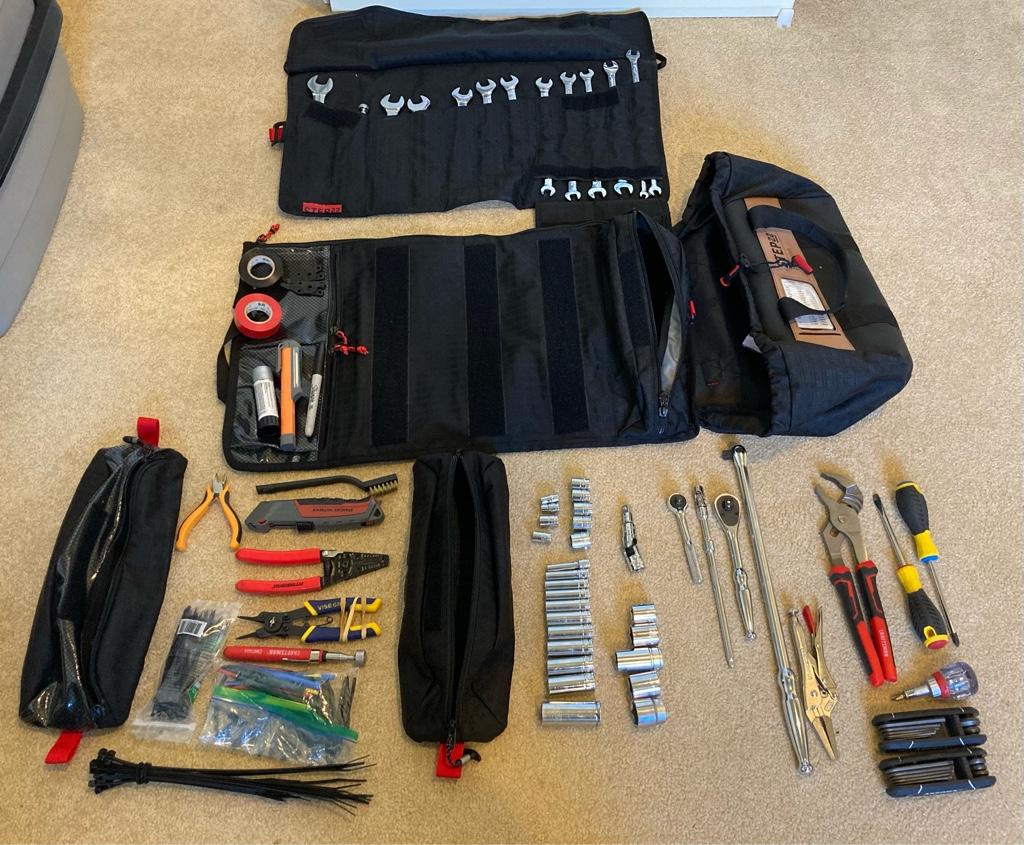 Packed up, using the nice label patches provided for the moment-even if I sharpied them. 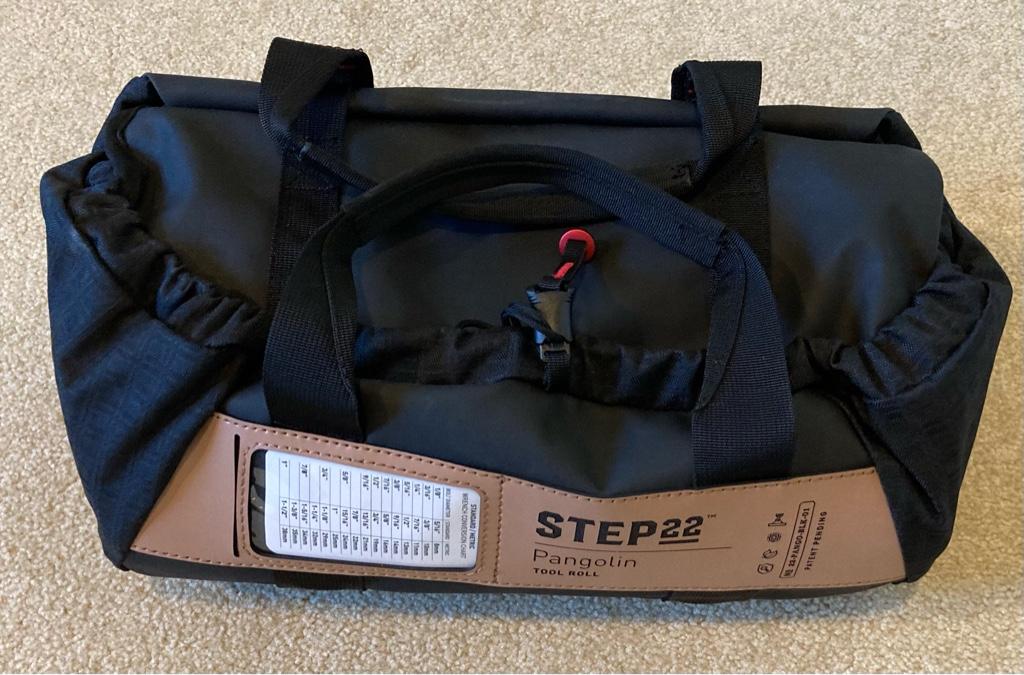 Tucked behind the driver’s seat 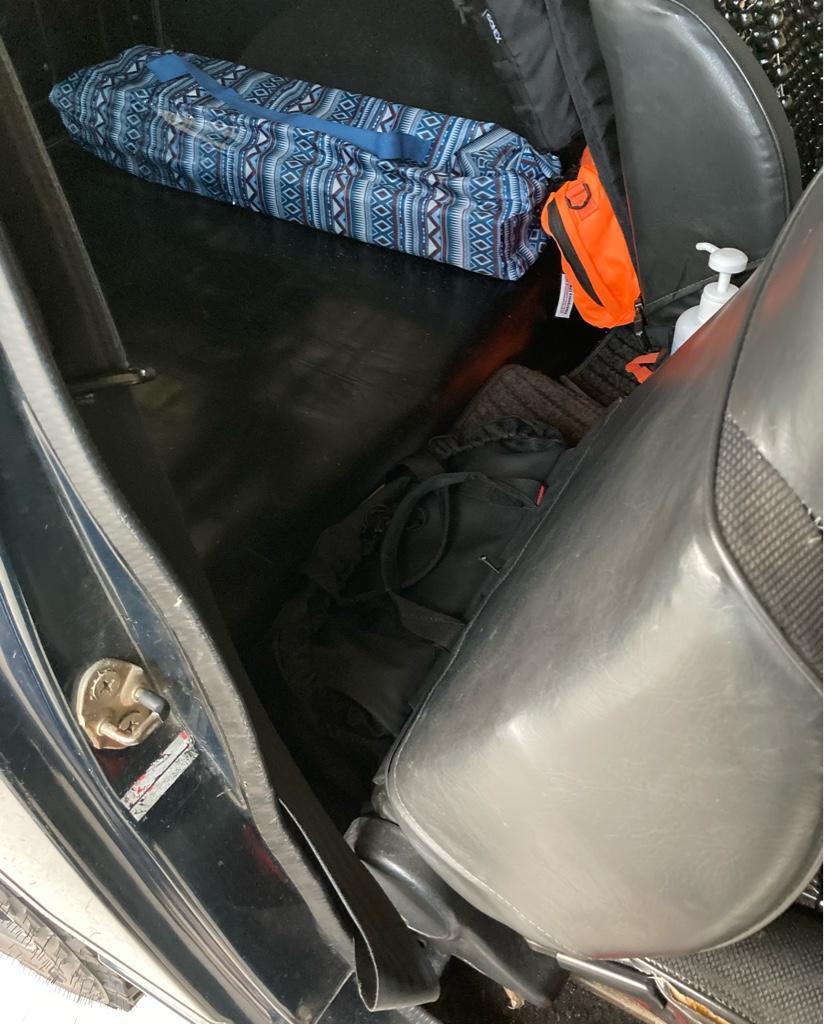 Overall look at the back now, with some good storage space given back. Seat will go all the way back. Time will tell if it is adequate but given the ability to add light spares, some larger tools if needed, and the like it will certainly evolve but also provides a self limiting size that prevents the entire kitchen sink from coming in the truck. Discipline = weight savings, which is a good thing in the long run. Light and fast. Well, in this case, light and slow. 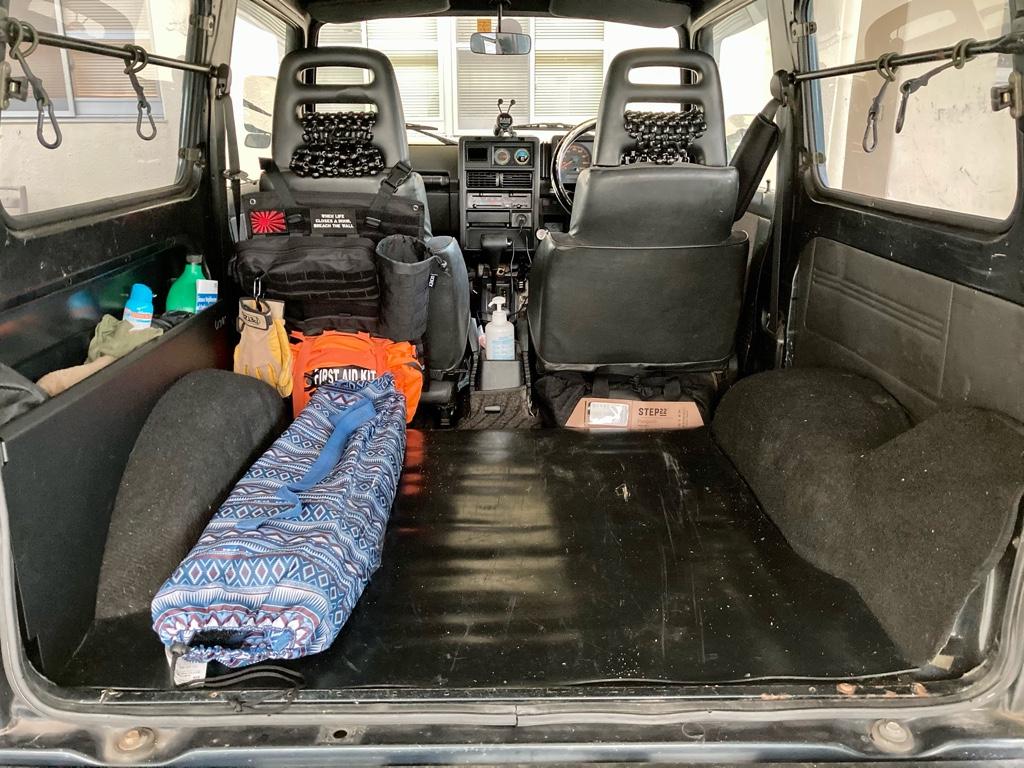