Hard to say since he included the actual web address to where he got them in the post...........
A

I am guilty of skimming the words while being distracted by the pictures.

Thanks for not being a d!ck about it .

Hey, we all get distracted, and a question may get a bit more information than was originally given.
A

Recently had all three cross member bolts on the passenger side break free (I neglected to get before pictures). Which caused the drivetrain to shift towards the drivers side causing driveshaft to contact the upper control arm, breaking the yoke and front u-joint. 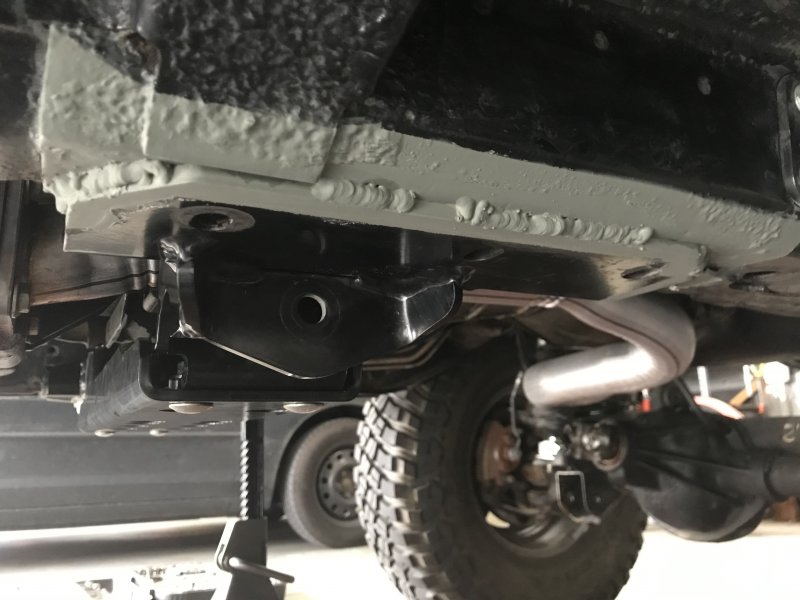 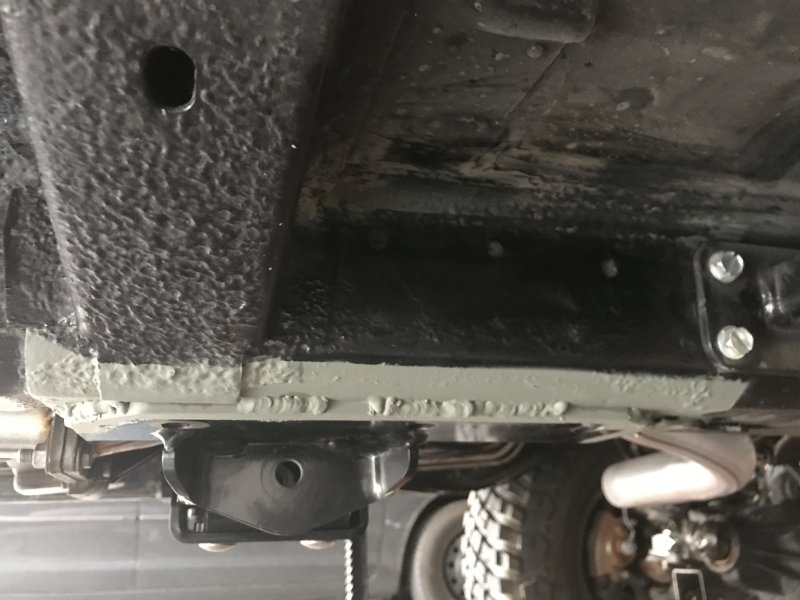 While I was under the Jeep, I took the opportunity to install the new diff guard that I recently got. The diff guard came with new mounting hardware for the guard. Not wanting to have half the bolts be a 1/2' bolt and the other half 3/16 allen head, a run to the hardware store was made to get 5 more allen head bolts. While getting the additional hardware I noticed that there was no price difference between the stainless steel bolts and regular steel. I ended up getting 10 stainless steel bolts so they all matched. 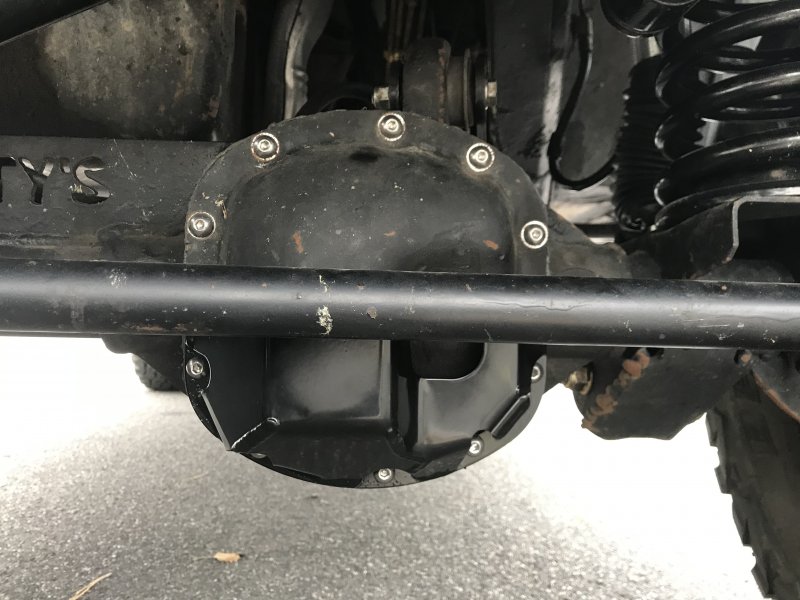 There’s nothing worse than starting your Jeep only to have the battery fail you. Having now experienced this several times in the last few months, I finally came to my senses and decided it was time to really address the issue. It's been said, a Jeep with a performance battery will never fail to start, whether you’re in the blistering cold of Montana or in the dry heat of the Arizona plains. Whether you choose a performance battery from any of the top brands, you’re guaranteed to get a battery that will get you to where you need to go. A performance battery with advanced AGM technology and up to 1500 pulse amps is guaranteed to outlast conventional starter batteries.

After reading through specs and reviews on several different kinds of batteries I finally settled on the dual purpose (deep cycle/starting) X2 manufactured by NorthStar. I opted for dual post to connect the auxiliary power supplies for various low draw accessories to the front post. I spent more than I really should have on a battery, but my hope is that it will last several years before I need a replacement. 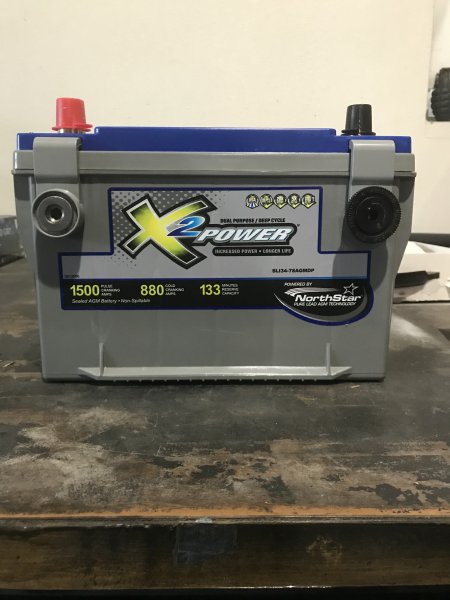 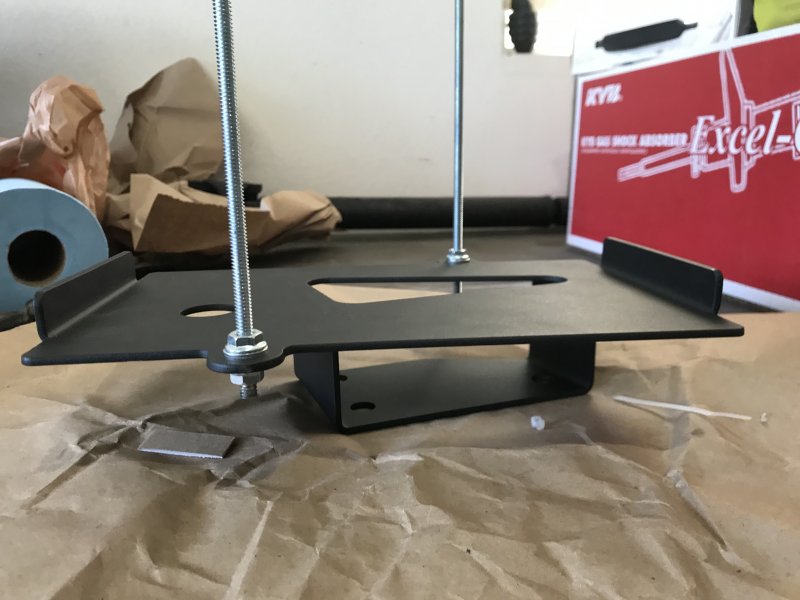 When I pulled the old battery tray out I found rusting had occurred on the nuts holding the tray in place, as well as beneath the battery tray. Even though I had soaked the bolts in PB Blaster a couple of days prior I snapped off the stud on the first bolt on tried to remove. A lot of heat from a butane torch and the remaining two bolts came out with a bit of groaning. I still had a bit of Chassis Saver on hand and put a couple coats down to stop further rusting. 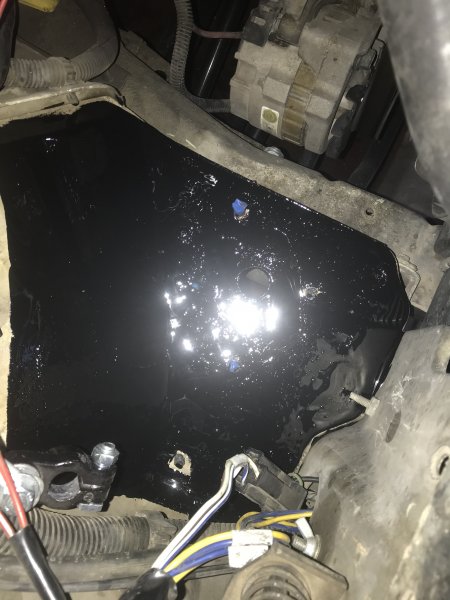 I let the Chassis Saver to cure for 48 hrs. before installing the battery tray and new battery. The front post provides 12V power to the head light harness and the Eaton E-locker. 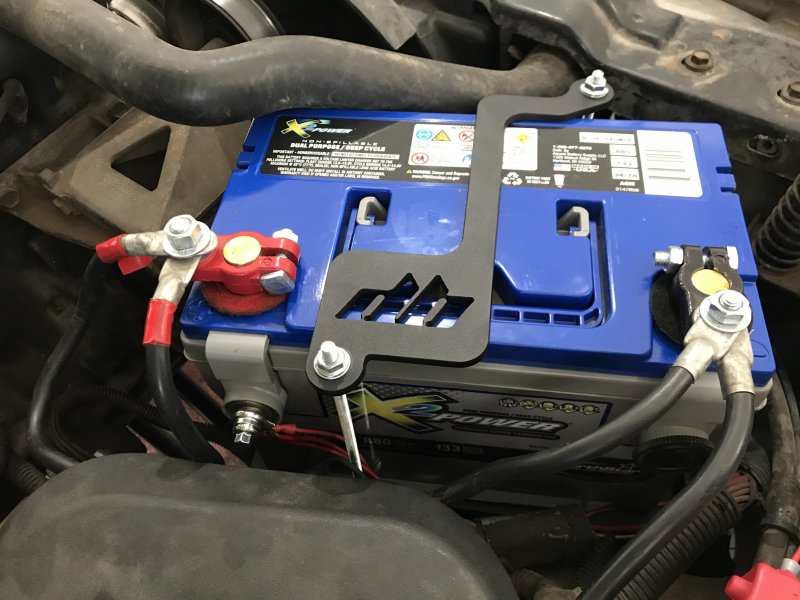 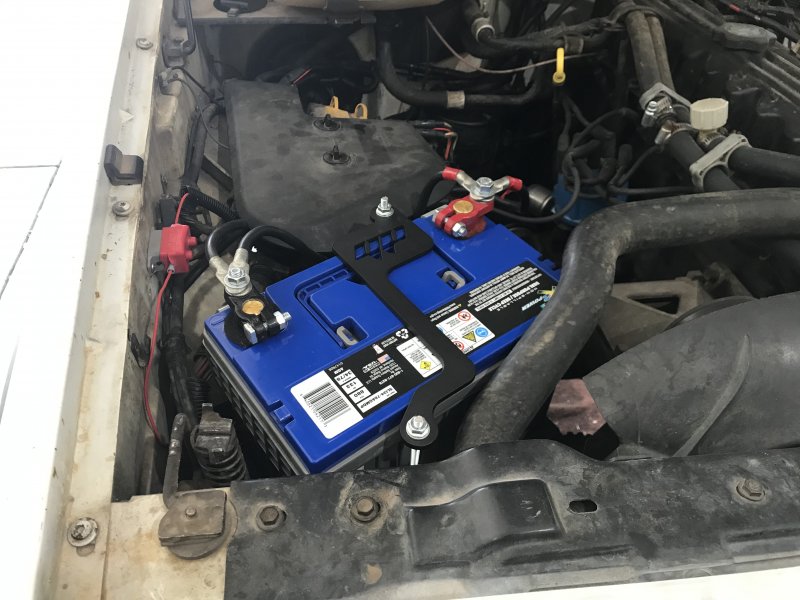 Sweet build. Nice to old Comanches come back to life.

Long Way Down: An Epic Journey by Motorcycle from Scotlan...
by Ewan McGregor, Charley Boorman
From $5.72

Thanks! Appreciate the positive feedback.
A

When the transmission cross member bolts tore from the frame it caused the drive train to shift to the drivers side. As the yoke ground against the upper control arm both of the "centering tabs" (not sure what the technical names of these are) broke off. As I see these as more of a centering device I have always been unsure of how vital these "tabs" are, especially as I prefer to use the u-bolt straps. My thoughts are the u-bolts are really what apply the pressure and prevent the end caps from flying off during rotation, but I don't really feel like testing this theory out. 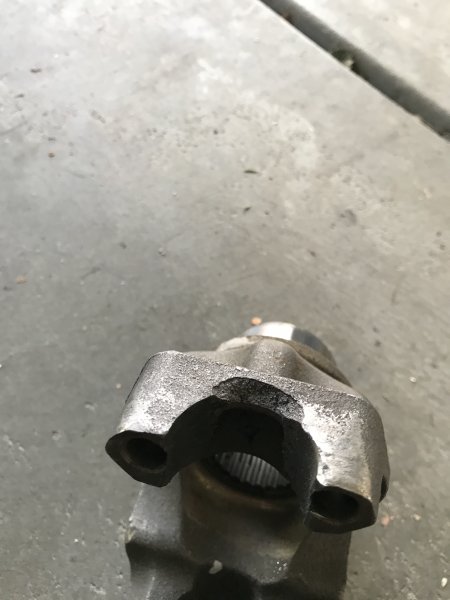 So in place of unnecessarily testing out my theory the yoke needed to be replaced. Earlier in the build I swapped out the original disconnect HP Dana 30 for a non-disconnect HP Dana 30 from a 98' XJ. This eliminated the weaker axle tube and the two piece axle for the single more "stout" axle shaft. The 98' HP Dana 30 uses a shim pack for pinion bearing pre-load adjustment, meaning the yoke torque is independent, as the bearing pre-load is set by the shims. So I didn't have to worry about a collapsible crush-sleeve that is tightened until the correct pinion pre-load is obtained. Regardless of how the pinion pre-load is achieved I've read multiple threads that recommend recording rotational drag of the pinion, however as I could not find a definitive answer to this I am thinking it is not necessary.

To swap the yoke I went about it in a more crude manner as my torque wrench is broken and the slow turning with a breaker bar kept causing the Jeep to creep forward instead of breaking the nut loose. To keep the torque in the ball park I marked where the nut aligned on the yoke with a paint pen then removed the lock nut with an impact wrench. To a whole 5 seconds. 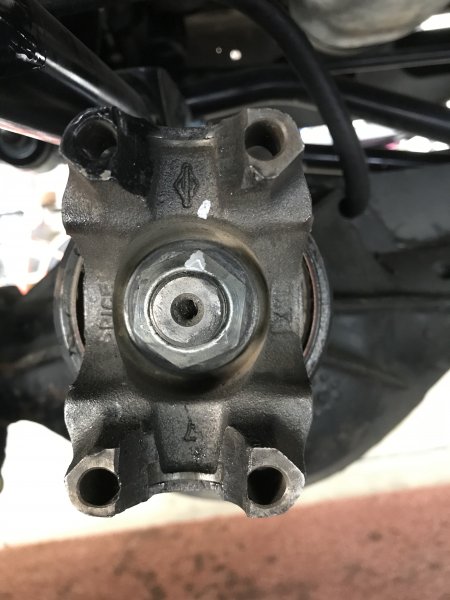 With the nut off yoke slid right off with little effort. 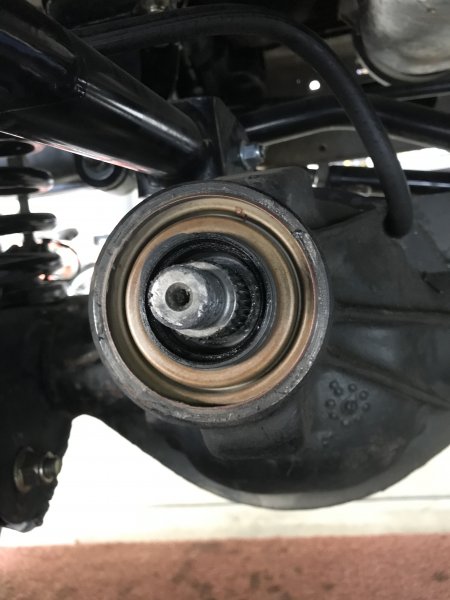 The new yoke was aligned in the same orientation, slid into place and I use the impact wrench to tighten the lock nut back down. While tightening I went at a "controlled" pace and torqued until the paint mark on the lock nut was in the "same" general alignment that it was previously. 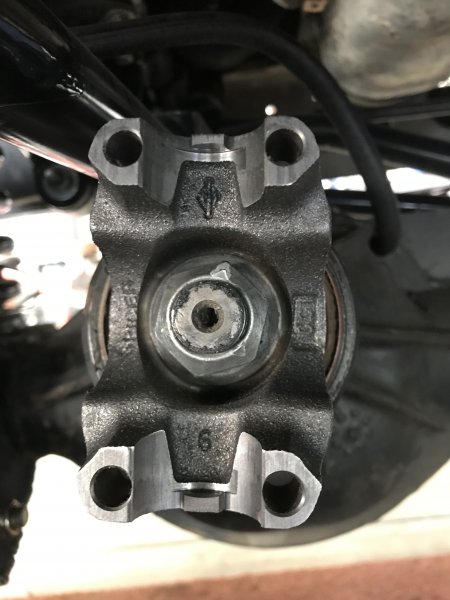 Being under the Jeep I addressed another issue I was having. The Boostwerks Engineering 231HD Linkage was giving me fits. You would think with such a simple design (two FK rod ends, two jam nuts, and random nuts) to connect everything it would be simple to operate. No matter how much I adjusted and fine tuned the linkage I could not get the transfer case to stay in 4Lo while driving. It should shift into 4Lo, but as soon as I went to crawl forward it would pop out of gear. I've adjusted and played with the linkage length while under the Jeep, and it would go into 4Lo. But as soon I went to drive it would pop out of gear. It appeared that the transfer case lever would contact the center console before it could lock fully into gear so as soon as torque was applied it would pop out of gear. I was getting to my wits end when I stumbled on a simple solution. Who would think something as simple as swapping which side the linkage attaches to the shift lever and transfer case actuator would fix the issue. I did not change the linkage length. Ever since I swapped the sides the shift lever engages 4Lo and staysin gear while driving. 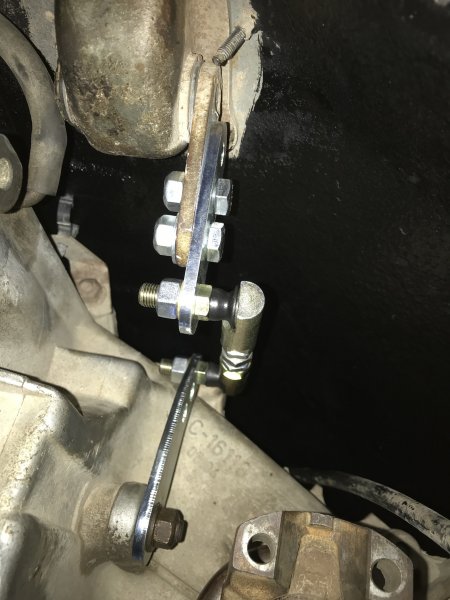 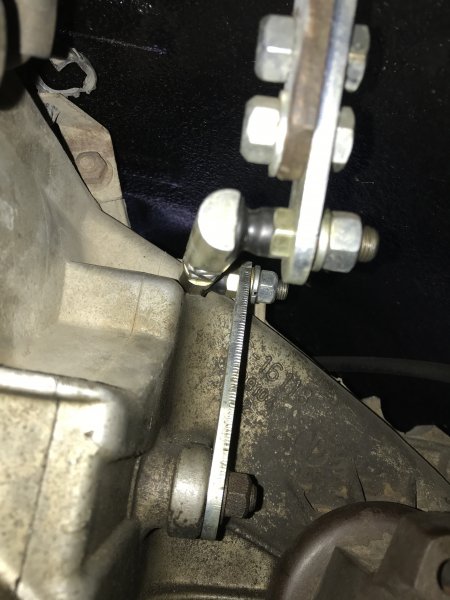 Been taking advantage of all the self-isolation that's going on. Over the last week and a half I've been taking care of my punch list of items on the Comanche. First item that I tackled was the leaking brake line connections. The drivers side front and the passenger side rear brake lines were leaking at the connection point of the hard and soft lines. On top of the leak the flare nut on the drivers side front had been stripped at some point in its life, which required the use of some vice grips to tighten and loosen the nut. I've avoided reflagging the line as I did not want to remove the lines from the Comanche and didn't want to wrestle with the flaring tool in cramped quarters. While surfing the internet I came across an inline flaring tool by Titan Tools. I found one at the local O'Reilly's autoparts for about $40. The tool makes double flares on 3/16" or 4.75 mm steel, copper, or nickel brake line. 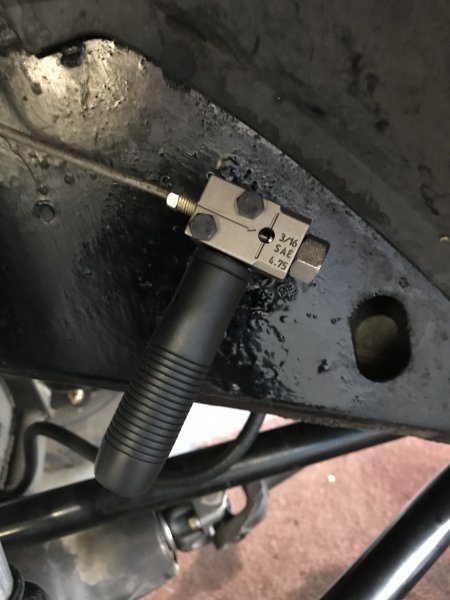 Step 2: Remove Positioning Bolt and insert the OP1 end of the punch. Tighten until the hexagon on the punch sits flush on the tool. 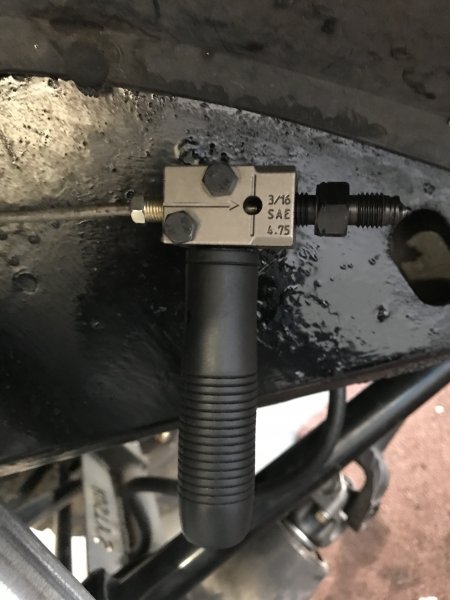 Step 3: Remove the OP1 punch, reverse and insert and tighten OP2 end of the punch until the hexagon of the punch is flush with the tool. 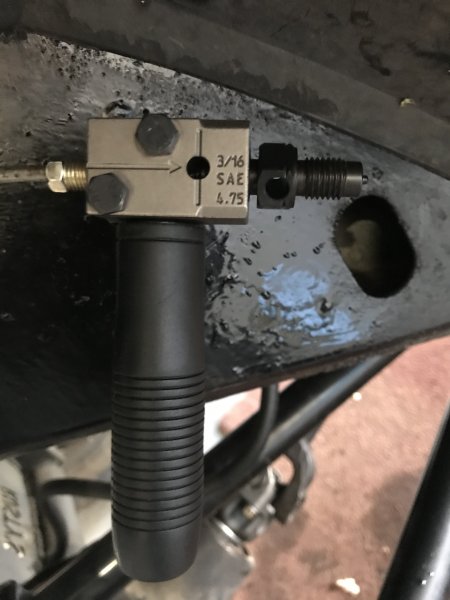 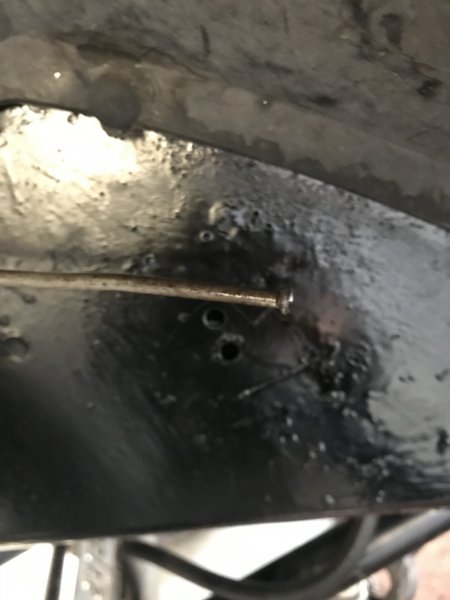 I was able to replace the nuts and relate both lines in 30 minutes.
A

Here is what I started with. The rivet in the venter of the assembly had stretched some and allowed for the pedal to move side to side.

Originally was going to remove the rivet head on the assembly, then drill and tap the remaining portion for a 1/4" stud. The stud would only need to compress the parts of the assembly together, as the arm would still rotate on the original rivet. However, after drilling out the rivet, the 1/4" tap that I was using broke off. After a few hours of unsuccessfully attempting to get the broken tap out I gave up and removed the rivet. 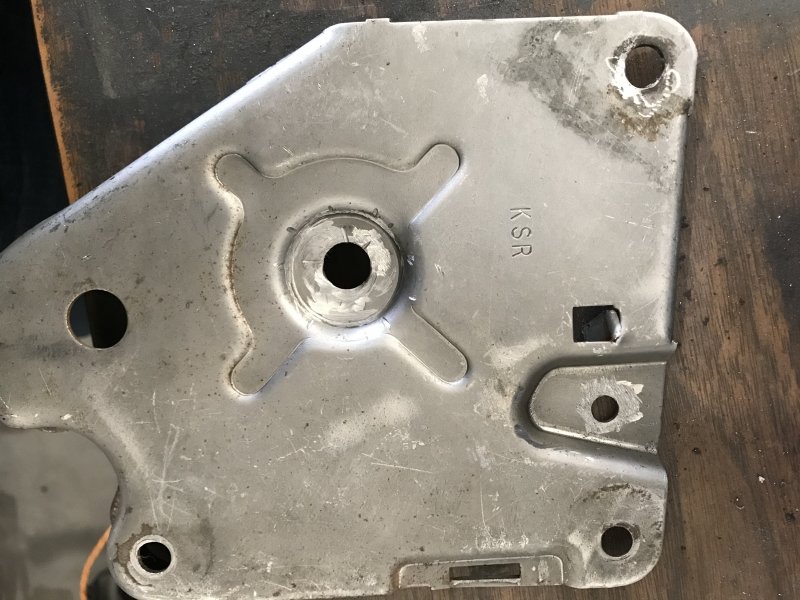 With the rivet removed the mounting plate was given a refresh before reassembly. 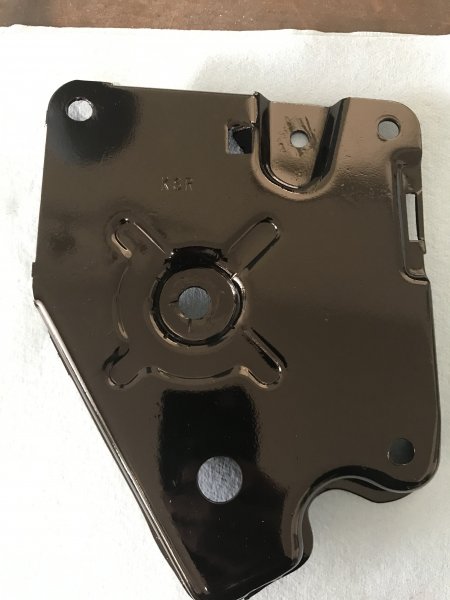 To reassemble the parking brake assembly a 1/2" x 2-1/4" bolt cut down to about 1-1/8" was used. This length was chosen as it allowed for the pedal arm to rotate on the smooth portion of the bold, while providing enough threads to thread on a lock nut. 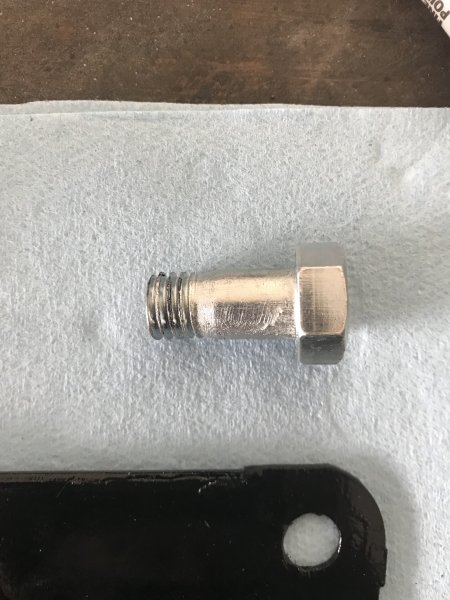 Reassembled and ready to be installed again. 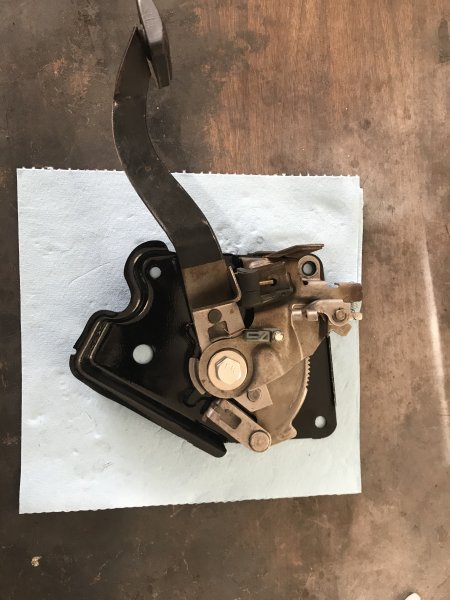 A low profile locking nut is about the same depth as the original rivet was, so it didn't affect reinstallation of the parking brake assembly when installed back into the truck. 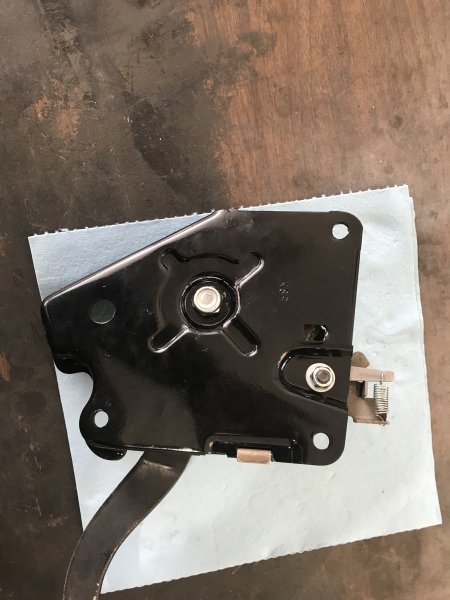 Thanks for sharing your Comanche build. The attention to detail with each step and the pictures is awesome

I’m interested in building my own Comanche and this thread definitely inspires.
A

Morgan Weafer said:
Thanks for sharing your Comanche build. The attention to detail with each step and the pictures is awesome