It's good to have a dog. I have been around them most of my life and they do add a lot to your life, well Jeeps do well, also.

Things have been crazy, but I managed to get a "new" tub home for the build so I don't have to mess with all the rust issues. This one has been all over the country. It's is out of Utah. I found it online on a Facebook Jeep page from a guy in Colorado. So we strike a deal, and he's bringing it to me... and he blows up the engine in his truck in Kansas. It gets towed to a diesel shop in Nebraska, and that's where I end up having to go get it myself. At least I got out of flooded Indiana for 3 days. 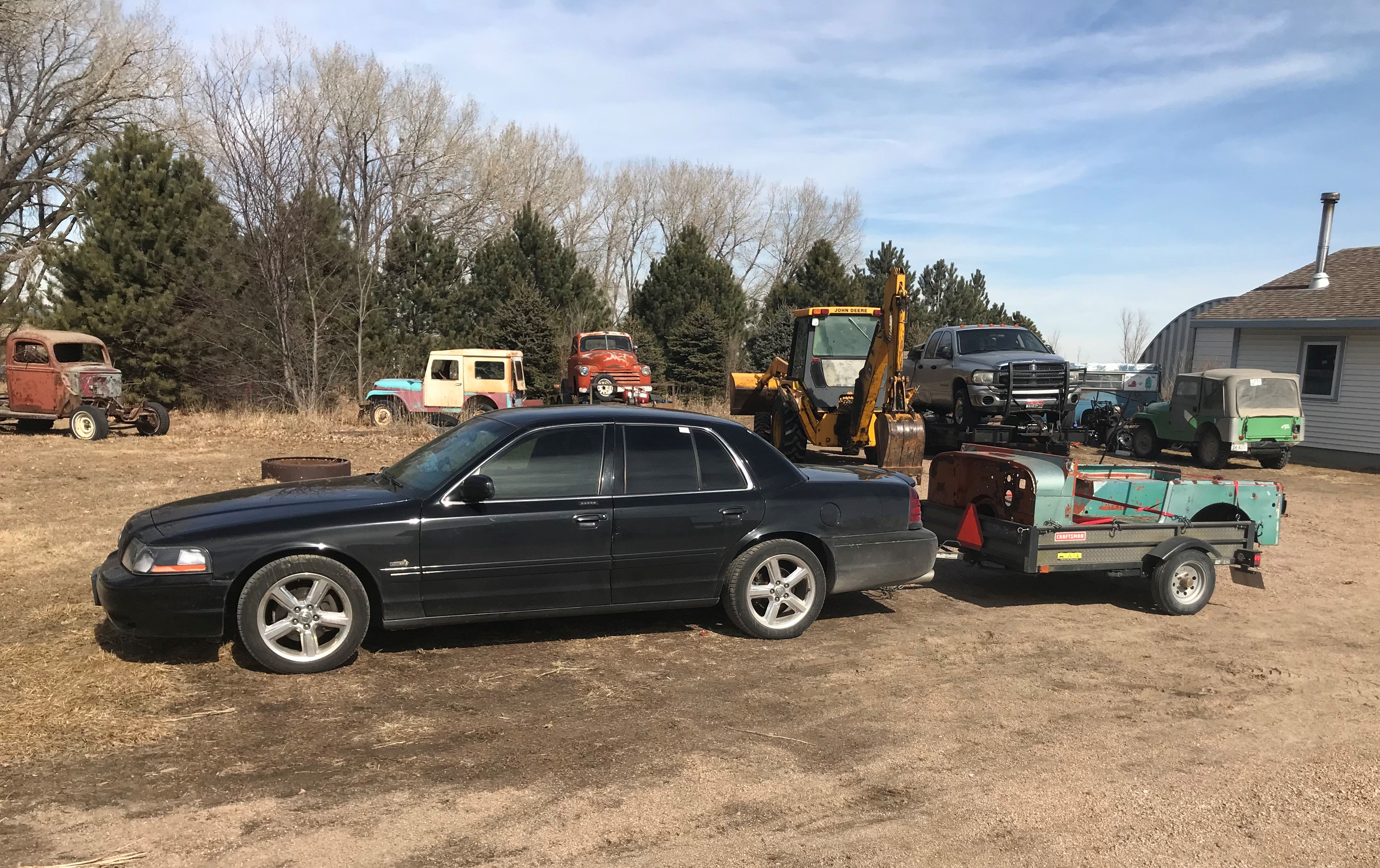 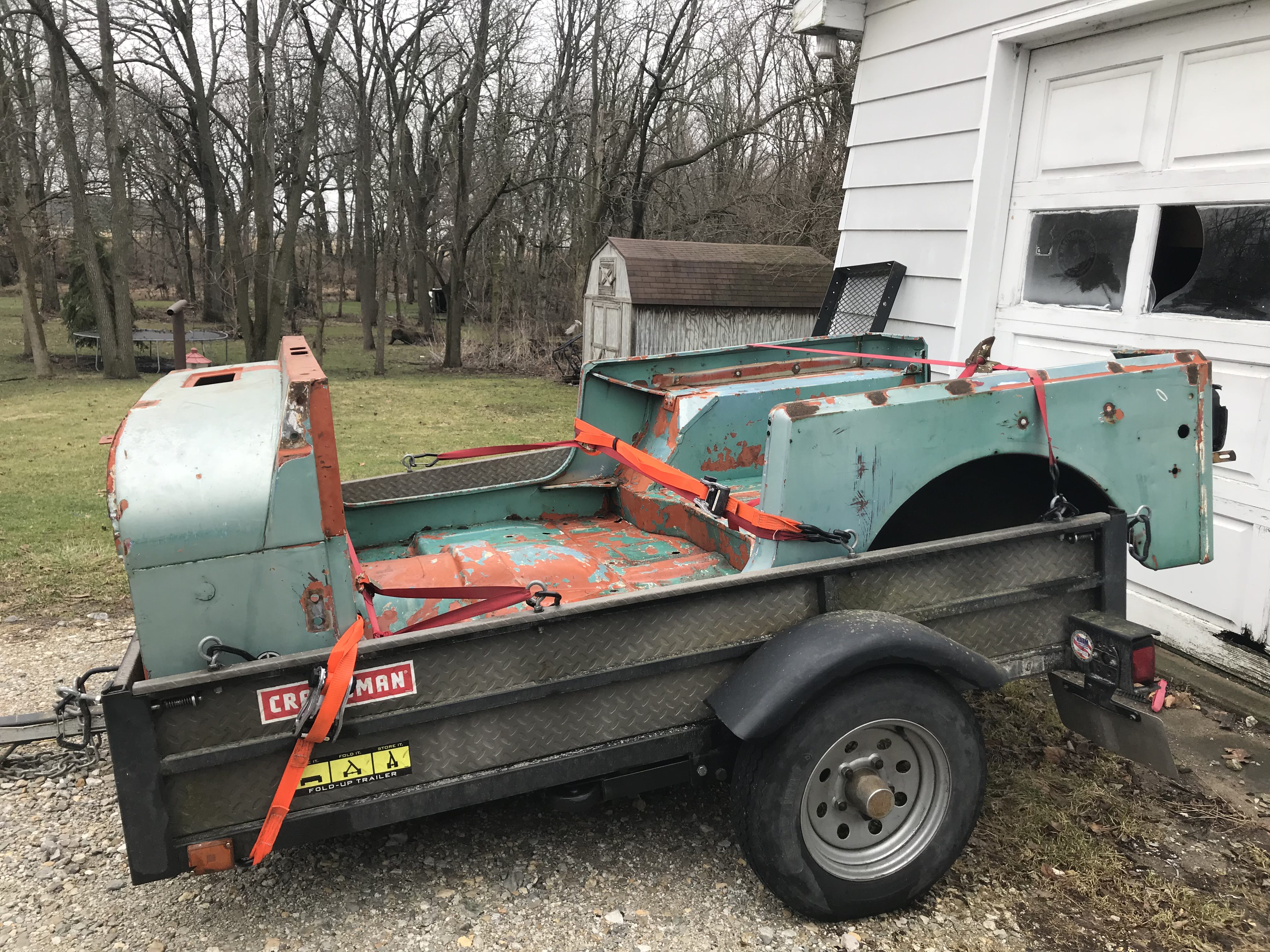 Spent the other day taking (breaking) off the body mount bolts to the old tub. Three of them broke. I'm going to position the Jeep so I can take the old tub off and set it on saw horses next to the "new" tub 'til I get it ready to mount. With my memory it will be easier to just remove parts from the old tub and directly mount them onto the new tub without delay. There is some work to do to it. The tailgate bolts are broke off in it, and some body mount bolts broke off in it... Sucks buying crap on the internet, but the sides aren't rusting away from the fender wells and the cowl isn't rusted away.

There will be some changes as the "new" tub is an "older" (unknown year) tub. It did come with a different under dash vent to mate to the heater box, but the gas filler is also different... it's round. No room for the big rectangle plastic insert of the 1980 one from my tub... The roll bar won't mount in either, but I'm planing a custom cage, so that's no biggie.

The frame will be taking shape on the other side of the garage as the powertrain and suspension gets swapped out. If I can get stuff in the garage moved around, the old tub will be off this week. 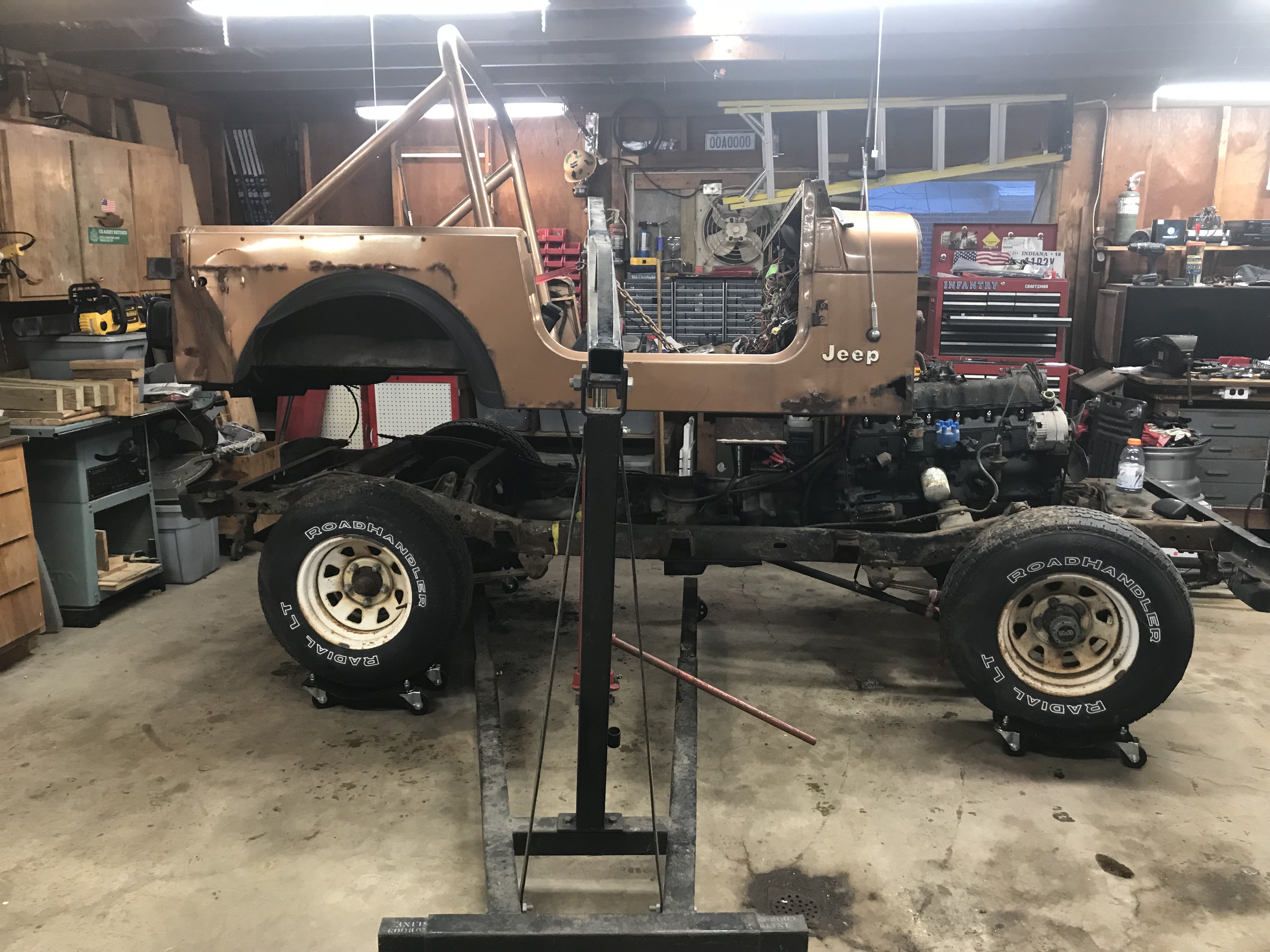 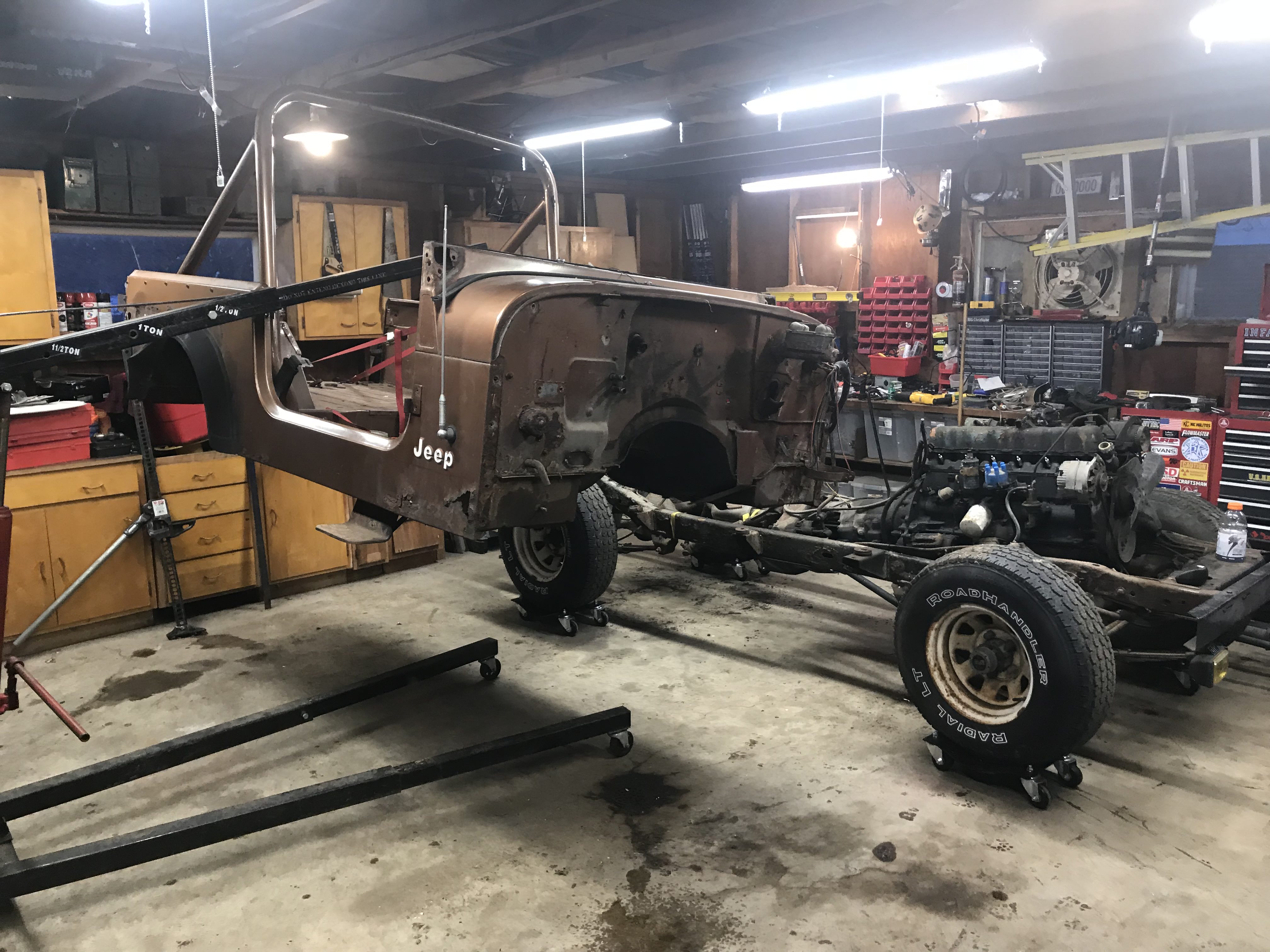 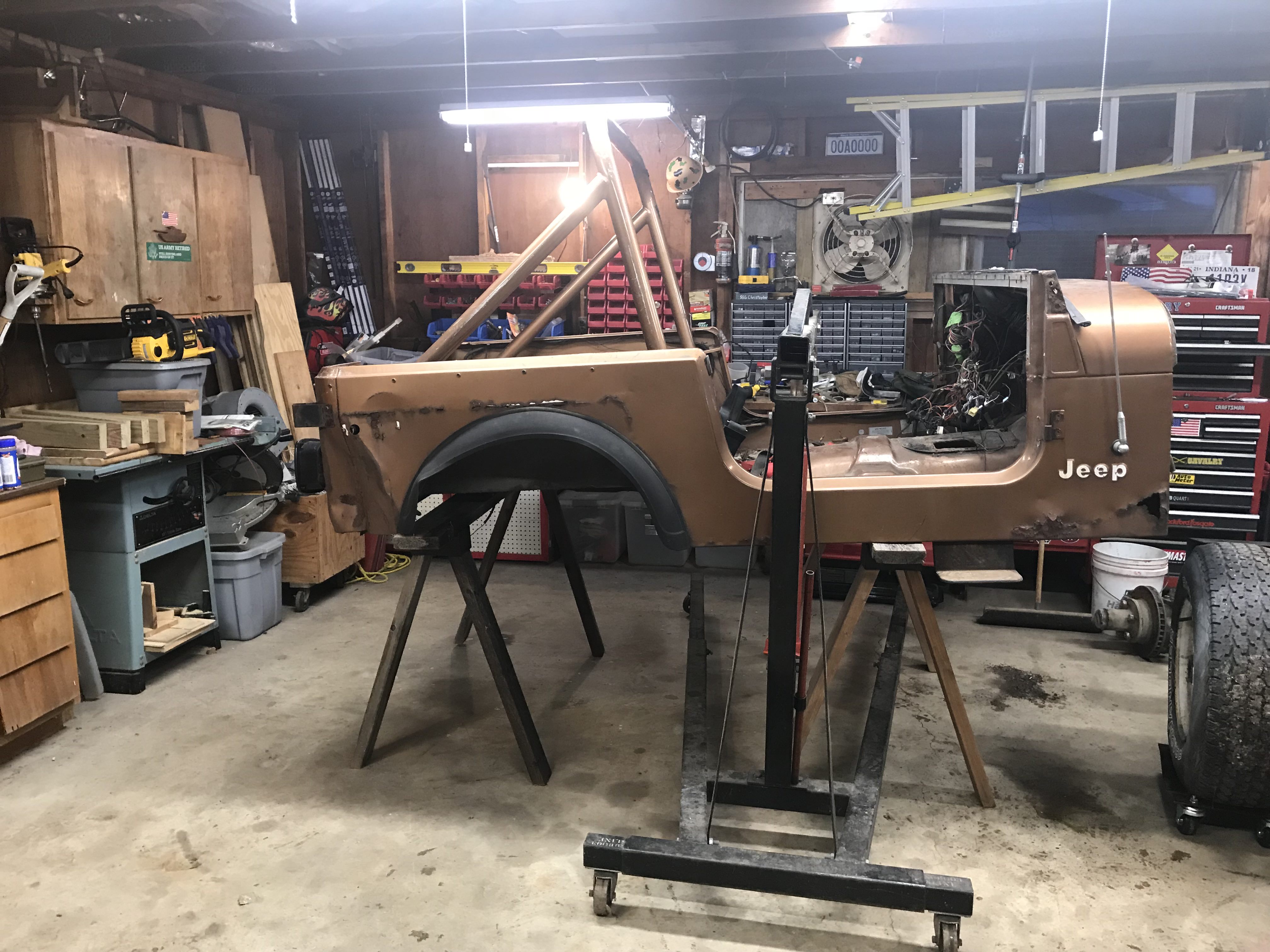 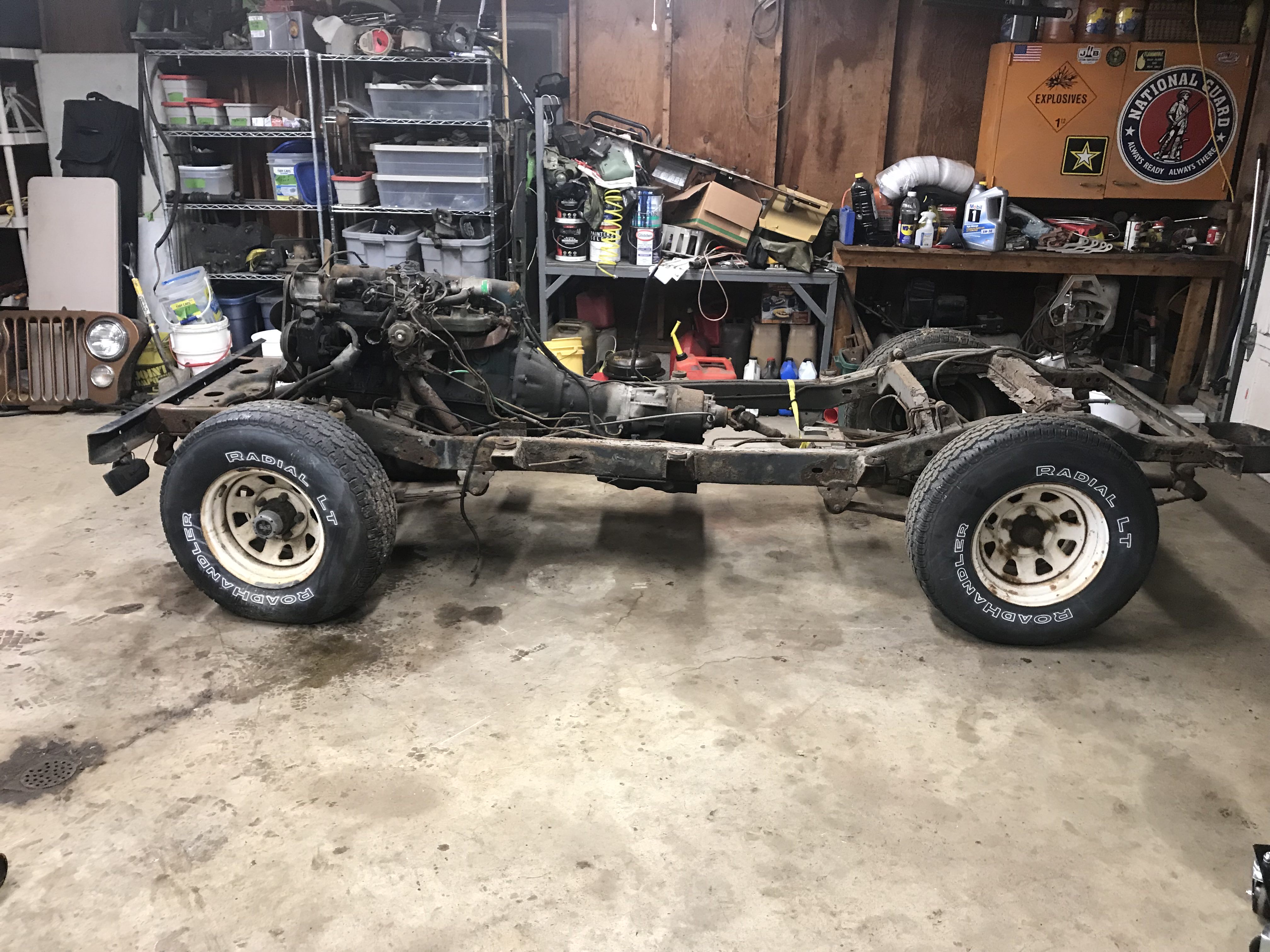 Engine came out today along with brake and fuel lines. 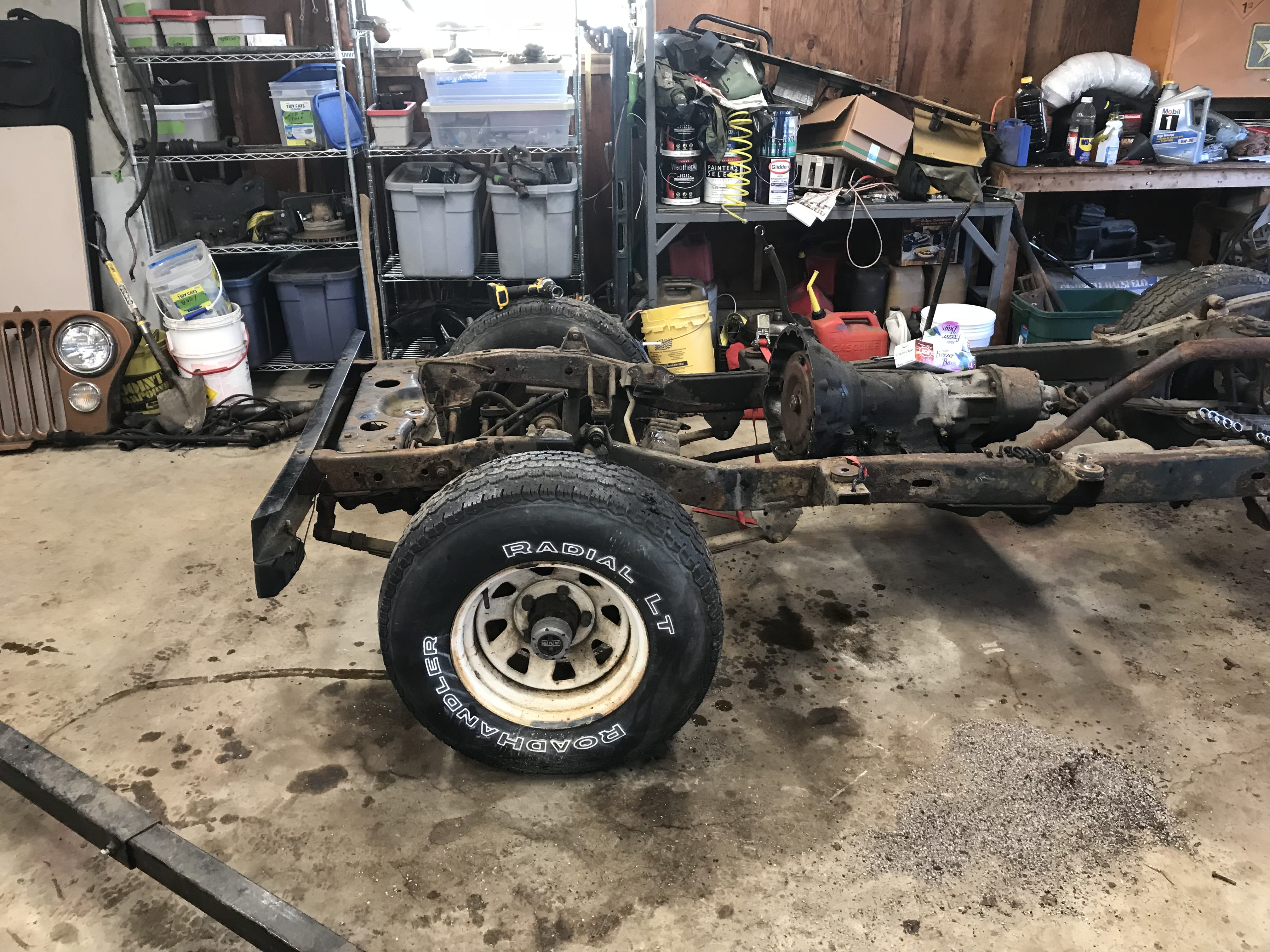 Here you can see the old ventilated I-6 (#3 rod through block) on a couple car dollies, and behind it on the engine stand is the Mopar 360 that will go in Jeep when all is said and done. 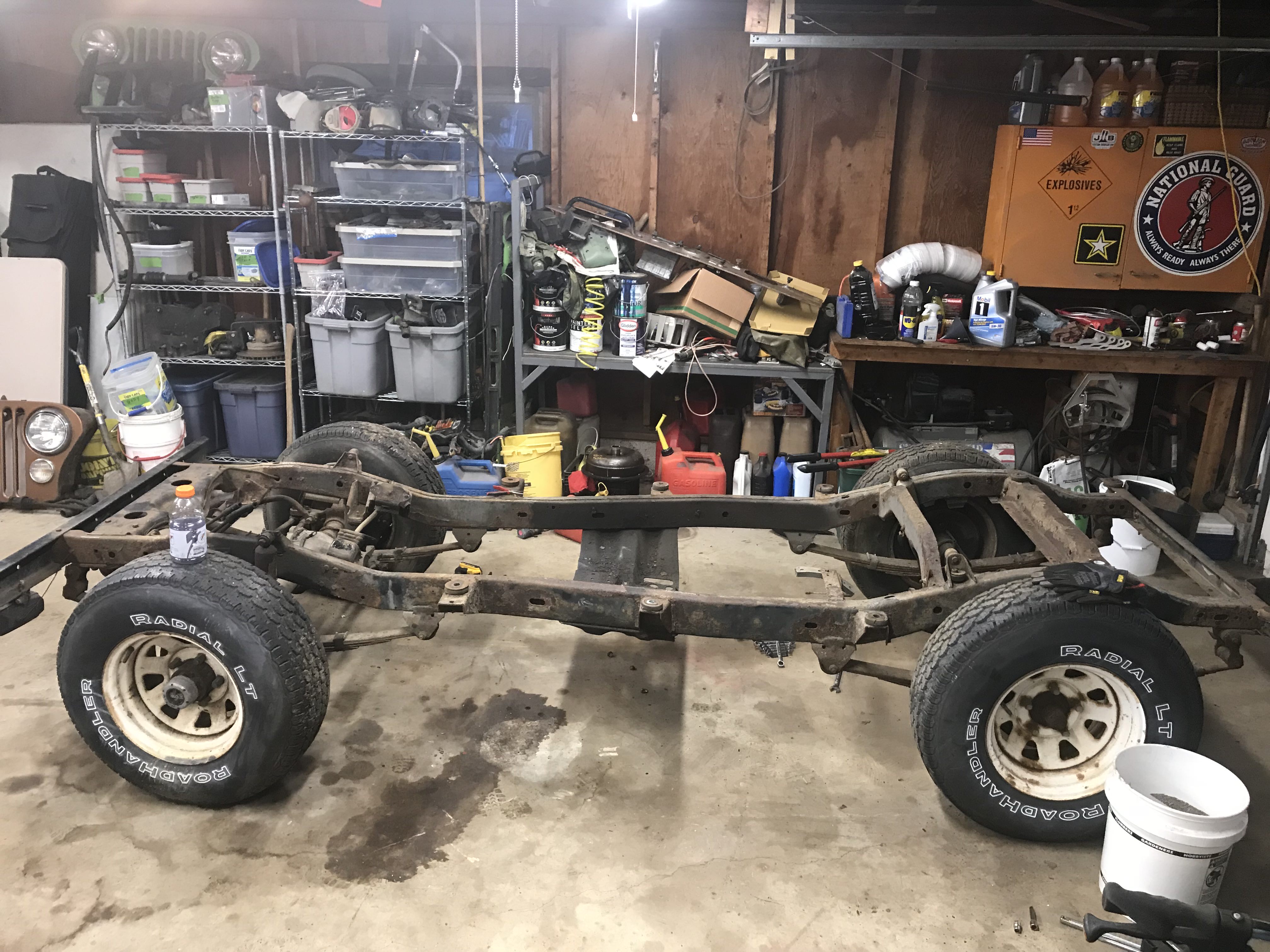 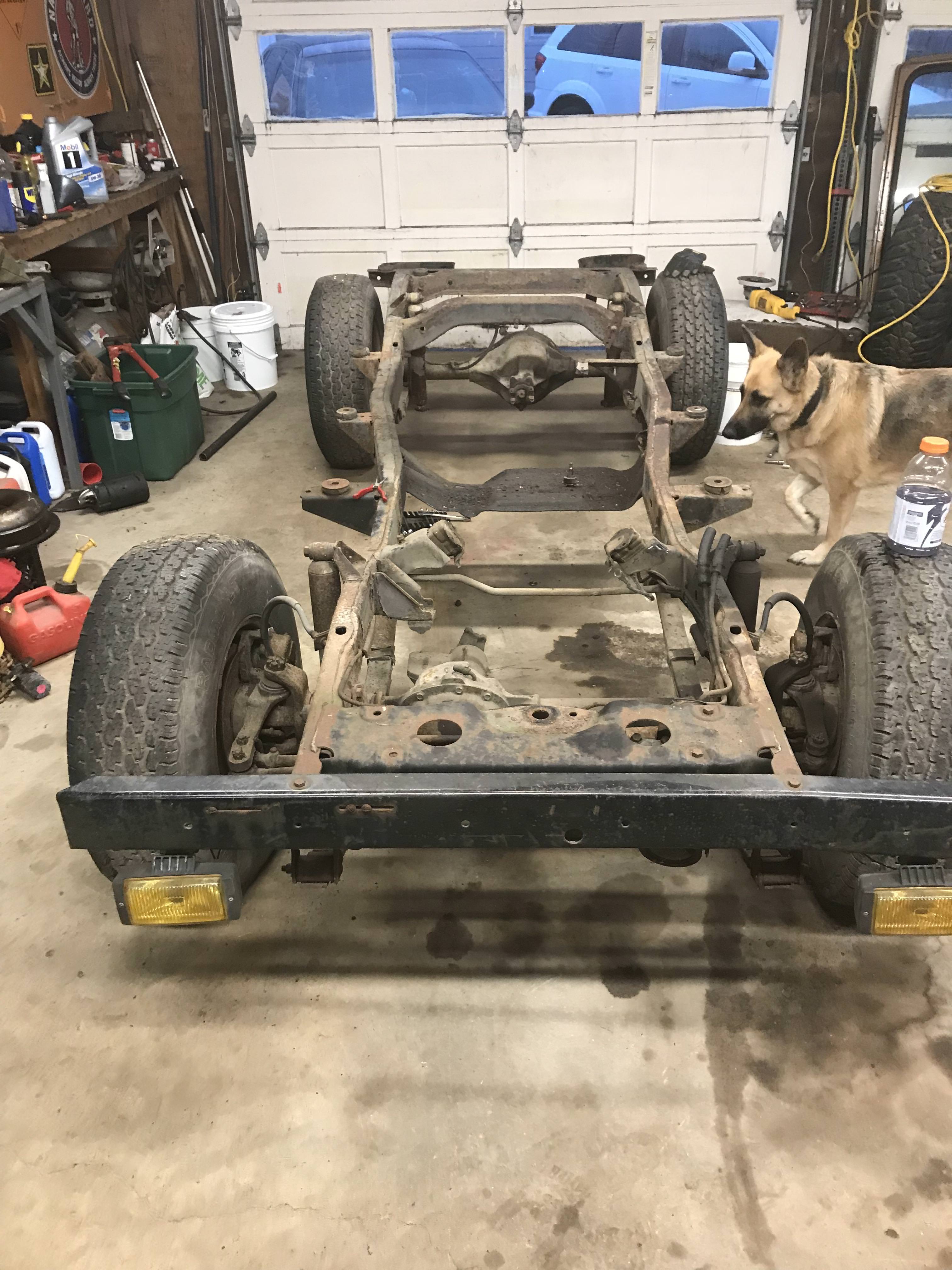 Axles and springs are off. She's finally down to the frame. Well, almost. The steering box and front sway bar are still on, but I'm going to see if their location can remain unchanged if possible. It will remain upside down for a while, as I still have some brackets to cut and grind off in the front before I get to the sandblasting. 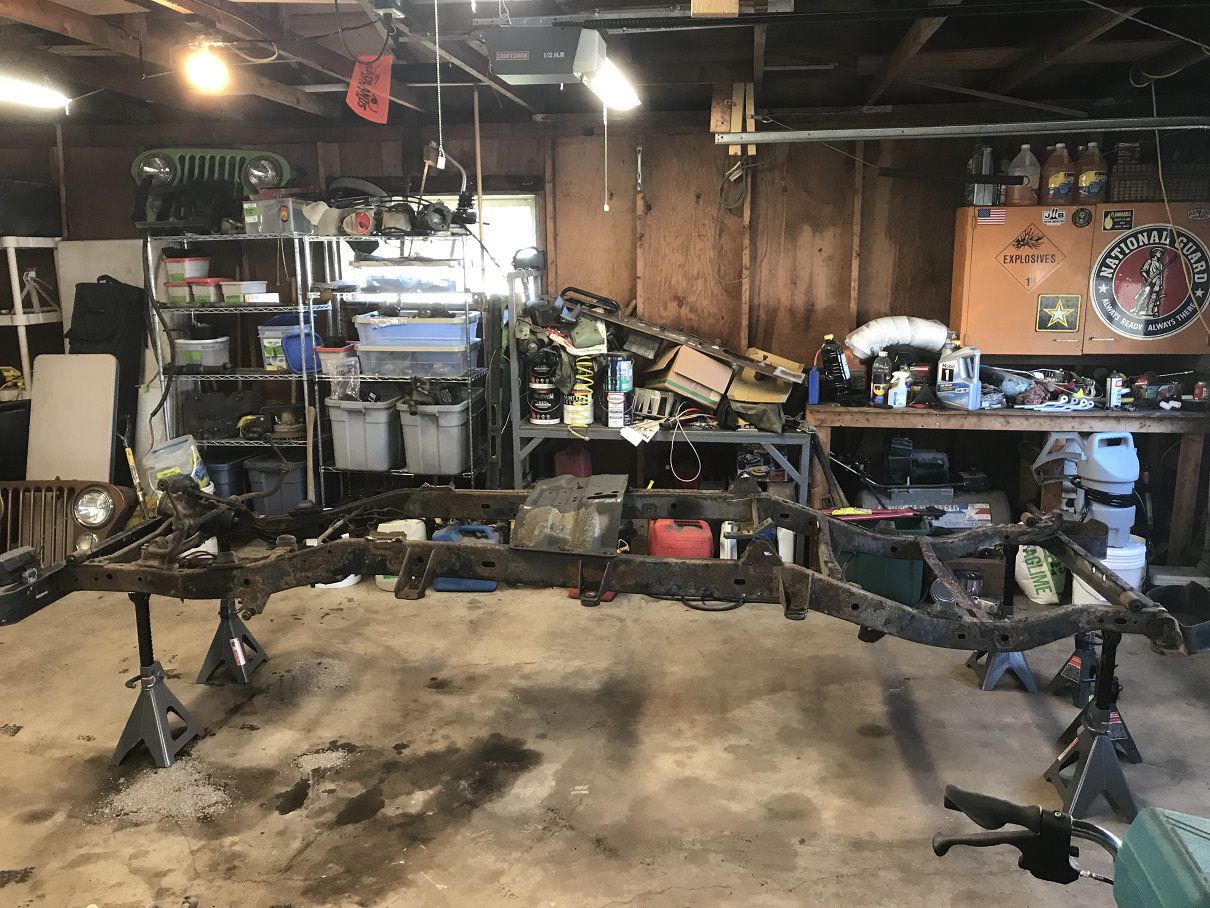 Great progress, keep up the good work. That is a fine looking dog.

Looking like a fun build! Love frame off builds. Can literally check each and every sq inch of the vehicle.

mountainsports2002 said:
Great progress, keep up the good work. That is a fine looking dog.
Click to expand...

Thanks. Brandy is indeed a good dog. She will be going with me on adventures in this Jeep when I'm done with it. Well, she goes everywhere with me, she's my PTSD/TBI service dog.

stoicalpear said:
Looking like a fun build! Love frame off builds. Can literally check each and every sq inch of the vehicle.
Click to expand...

Yes, and every sq inch needs work too... This thing blew the engine years ago and has been sitting in a scrap yard in Illinois. A fellow veteran bought it with the idea of rebuilding it, but he just had it in storage for 2 years, and did nothing, so I picked it up for the last two months storage fees.