I have a 2 door, 67, 109 with the van sides. I want windows in the left panel as the RHD here in the mts can get sketchy when changing lanes. I would like to keep the drivers side panel solid so I can one day build a shelf or some other usefull way to keep my gear from hitting me in the head. My question is... does anyone have a resource that could supply the side panels (I have found that they are rare) or would anyone want to trade? I am really not looking forward to cutting my own windows and I know there are people out there looking for the van sides... Really I am looking at my options and figured someone here could chime in.
btw: I have the side panels from an 88 with sliding windows so I thought I might be able to splice them in but again I don't want it to look like Sanford and sons.
Thanks,
Jay

First of all, remember that the 109 roof sides are the same as 110 pieces.

I got mine from Rovers North, but only because we happened to "be in the neighborhood".

I'd try George at RoversDownSouth....for entertainment value if nothing else

You may or may not see them on his web site, just give him a call and he'll tell you if they're there or on the way or NLA.

Thanks man I will try them in the morning. I didn't know that the 110 would work so that is good to know... Maybe they are easier/ cheaper to come by...

Long Way Down: An Epic Journey by Motorcycle from Scotlan...
by Ewan McGregor, Charley Boorman
From $10.77

I would try the Rover's North board to see if anyone wants to swap. Some people like the van sides.

these are on ebay right now,

Thanks for the ebay tip. Its a 13 hour drive one way but I've been looking for an excuse to go north. He didn't specify size and I don't have a parts number book so I emailed him. I'm also trying to get on the Rovers North board but the admins are being slow to accept me via email. I would rather trade with someone and it would work out great if someone had a LHD and wanted the same half and half setup...
thanks,
Jay

achampagne said:
these are on ebay right now,
Click to expand...

Yeah I thought they looked short so I emailed the guy. I already have one set for the 5-door/ 88. The rover north people won't email my confirmation so I haven't been able to post there. I noticed they didn't have a classified section or am I just missing it?

"You can sell your complete Land Rover, or Land Rover project but not individual parts. Posts listing parts for sale will be removed, and the users may be banned from posting. COMMERCIAL POSTING IS STRICTLY PROHIBITED. "

I know it seems silly >wink< but it seems that a vendor who sells parts at retail doesn't want parts for sale at wholesale on their web site.

Yeah what fascists!!! I figured that was the reason... They still haven't emailed me back.

why not post your proposed trade on landroverexchange.com ? That would be my first stop.

I was unaware of that site but posted. Thanks for the heads up!

salve7 said:
btw: I have the side panels from an 88 with sliding windows so I thought I might be able to splice them in but again I don't want it to look like Sanford and sons.
Click to expand...

It is possible to graft two short sides together but one side needs to be cut sort enough that you can not have two windows on a side. You cut the leading edge with the parts for the door of one to make the rear part and enough of the back off the blank panel to form the front door pillar and sides enough to reach the cut down window side at the rear. Or conversely put the opening window at the front by cutting just the back corner off and fill in the rear side with the blank side.

With my truck I wanted blank sides at the front where I have a tall cabinet mounted on each side and I wanted opening windows on the rear sides. Since the factory didn't make the combination and I wanted it to look as much factory as possible I cobbled up my own. 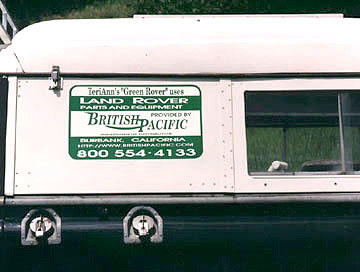 ​
I have an aluminum bar about 2 feet long at the top and another at the bottom channels that carry the rubber seals. This firmly hols the two sections together. Then I have thinner aluminum bars on the inside and outside sitting vertically centered on the joint between the two panels sandwiching the sheet metal ends together. The attachments form a sideways capital 'H'. I don't know if it looks Sanford & sons but it has been working for me for over 13 years now.

If you just want windows on one side & don't need them to open you can duplicate the stock 109 regular window sides by buying a pair of replacement window glass and stock seals. Cut the panels & mount them. There are no strange internal channels in the fixed windows like there are in the sliding windows. It shouldn't be that bad of a job and is likely to be a lot easier than sourcing a pair of window sides and way cheaper.

The Alchemist, 25th Anniversary: A Fable About Following ...
by Paulo Coelho
From $5.91

Zen and the Art of Motorcycle Maintenance: An Inquiry int...
From $20.2

Your rover looks great! I wouldn't mind it looking like that Im just not sure if I have the tools to cut a straight line... Is your line of sight better when checking for traffic with the windows in the back?

salve7 said:
Your rover looks great! I wouldn't mind it looking like that Im just not sure if I have the tools to cut a straight line... Is your line of sight better when checking for traffic with the windows in the back?
Click to expand...

Thanks! I think so but I know I'm prejudiced.

I'm not that good at cutting straight lines but a clamped on straight guide helps, I have a file and the sandwich of aluminum over the cut hides where I really blew it.

Helps with cars off the back alongside but there is still a huge blind sport on the passenger side and I need to stick my head out the drivers side to get a good rearward side view. I still heavily rely upon my wing mirrors and stop the vehicle perpendicular to the road I'm about to pull out onto to make sure I can see traffic through the door windows.

When I'm camping in back I sit and cook inside the rear of the truck so the windows are perfectly placed and can give me a side breeze when desired. Since my refrigerator is also alongside the window I can get into it while standing outside the truck.