Great thread. Read a review on the ST Maxx that pointed to a problem he noted of his truck pulling to one side while running these tires, with a possible cause being the asymmetrical tread pattern. Have you noticed any pulling or does the truck seem to track pretty straight on the interstate? Haven't seen many other comments about it so thought I'd search out feedback from folks that have some miles on theirs.

Would you buy another set of ST Maxx tires or would you go another direction?

Mine have been good and track straight.....

Great thread Jim. I feel like I know you now. Glad you kept this going after 100,000 miles. I got my Tacoma a year before our daughter was born and I hope she can experience growing up knowing the same vehicle/camping as your kids have. Oh what a feeling! Lol

Wow! I can't believe it's been a year since I've posted anything on this thread. What's going on with the truck? Not much really. It's been daily driven as always and has also taken us and the teardrop on 2400 miles worth of camping fun. Merchants Millpond NC (Alligators!) ARSES Pine Creek Float in PA, Greenbrier River Float Trip in WV, and several smaller closer camping trips.

The only issues that arose:

One brake caliper froze up. I bought two remans and replaced them both. It stops great! One notable thing about this job. I bought (of course) a right and a left caliper. The boxes were labelled as such, but I received two rights. Didn't notice that until I went to put the drivers side on. Big pain in the ... had to reinstall the old one (it wasn't the frozen one luckily) bleed the brakes and wait two days for another one to arrive at the parts store.

New tires. At 6/32" of tread I called it quits on my 59,800 mile set of Cooper ST Maxx tires. I replaced them with Cooper ST Maxx tires. They are awesome! You'll notice a new set of rims in the picture. I took the trailer wheels and tires (which had almost zero wear by the depth gauge - 8000 miles in) and bought two new tires and two new wheels, for an instant savings of the price of a tire. Cheapskate, I know but the trailer can run the old set for a while until I can save some money to replace them....) 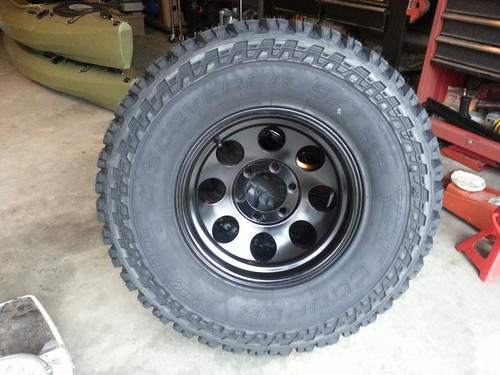 Always good to hear about a tundra with so many miles running like its brand new!
Y

Fairly new to the site, just read through the the truck thread and am reading through your teardrop thread as we speak. I love seeing the tundra used as it should be! We have a tacoma that is an awesome truck and goes great. I also have a Honda Accord with 286,000 on it. Gotta love that Japanese reliability! My overland rig is a 1997 Jeep Wrangler. Starting a trailer build soon hopefully.

Glad to hear she's still going strong (I assume she is since you posted in December). I had to put my mods on hiatus and have just been enjoying driving mine....it is up to 45k now

Yep she is still going! I get to camp with them a couple times a year... still looks great! Well over 200k now.

227,600 as of today. On a side note it's not going as strong as it should. Just found out today my 4WD isn't working. It worked during the snowstorms this past winter but now all I'm getting is some buzzing noises under the truck. So now I've actually got to work on the truck. ....

I sent that from my phone the day after I "discovered" I had a problem. Here's the real discovery story:

Beth and I were preparing the CrowsWing for its first trip of the year. We were going to Merchants Millpond State Park for a long weekend of alligator "hunting". We decided we should hook up the trailer and test drive it to make sure everything worked well. After a short highway jaunt we returned home satisfied everything was working well. Our kids had friends over, and their cars were on either side of the drive - now mind you our drive is steep (think difficult to stand steep). I haven't backed the trailer since November, so I was a little rusty. Happily I made it between the cars and the trailer dropped into the drive (mostly). One wheel was on the grass (level with the drive and just as steep), so I just followed it with the truck to get it all on the drive.

This put the drivers side back tire on the grass too - which was soaked with a recent rain. I wanted to go forward a little to straighten the trailer - I had to because there is a stone wall preventing me from swinging the nose of the truck in a way that would straighten the trailer down the drive. Guess what? Forward was a no go. That tire just spun like mad. No problem. Push the magic button. BUZZZZ! That's an odd sound? Why is my 4WD light flashing? push button. BUZZZ! light flashing. push. BUZZZ! light flashing. Put the truck in drive. Ease on the gas. Back tire spins. Dang it!

OK. I can do this, simple. I'll back up just a little more. This will put both tires on pavement. Of course in that backing the trailer jack knifes in the driveway dropping its tires off the drive and down a steeper (you need 4lo to get up this when you're down in the yard) hill to the yard. OK. Rear tires are on the pavement. Trailer is jackknifed in the yard. Gas on, brother. ER ER ER Er ER (can the laughter, that's tire spin on pavement, you know what it sounds like - just try to type it)

OK, I can do this. A little parking brake action and the other tire will grab some torque and pull me out. Left foot modulating parking brake, right foot on the gas. ERERERERERERERERERER! (in stereo!) Yep, that worked.....sorta. Now I've got both tires melting rubber on my drive, but I'm not going up. About this time my wife and three teenagers come out of the house.
"Watcha doin'?" she asks
"Trying to park the trailer"
"You're not doing that very well...."
"Yeah, I know that already"
Then I think I explained how the #$@%^&&*&^%#$ 4WD isn't working, and my wife understood we had a problem.

OK we can do this. Getting the keys to our new Tacoma, I pulled up beside the Tundra. With Beth spotting along the rock wall, the Taco just fit between the two with tires brushing rock on one side and the fender on the Taco missing the Tundra by a mere half inch. Once through the gap it was strap time. With Beth in the Tundra, I put the Taco in 4lo, locker and ATRAC on (taking no chances now) I told Beth to ease on the gas when the strap started pulling on the Tundra......and we rolled right up the drive. I pulled until the Tundra was back on the road (trailer still in the drive - but hey, it was in the drive this time).

Park the Taco in the road, back the Tundra/trailer down the drive (correctly this time), put the Taco back in its place - hit the net for info. Whew! Fun day!

All this and no one took pictures or video - I thought teenagers insta-you-tweeted everything!
Last edited: Jun 11, 2015

Check your actuators for corrosion first!

Yep. Check both actuators. The front ADD actuator was not actuating. The little motor was shorting out and getting super hot when the 4WD button is pressed. I sprung for a new actuator. The whole unit includes the slider fork, but I cheated and just used the electronics from the new one, since my slider fork worked fine. 20 minutes of messing with a screwdriver work and 4WD is back in action.